This essay is the first of five that reviews a recent conference at the Graduate Center, City University of New York. Read the second, third, fourth, and fifth texts. 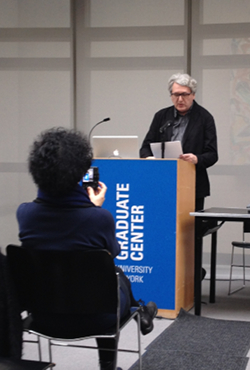 Boris Groys presented a keynote address called “The Museum as Gesamkunstwerk” to kick off a daylong conference, “Exhibit A: Authorship on Display,” that explored historical and contemporary approaches to organizing exhibitions. An interdisciplinary scholar and occasional curator, Groys is Global Distinguished Professor of Russian and Slavic Studies at New York University and senior research fellow at the Karlsruhe University of Arts and Design in Germany. A few years back he wrote an excellent book called Art Power (2008).

Groys’s accent made it difficult for me to concentrate on his words, and he repeatedly chuckled at what seemed like minor disciplinary quibbles between himself and other theorists (hardly anyone laughed with him). Reading a prepared paper, he relayed that “the artist of the future must be radically indifferent,” according to the nineteenth-century composer Richard Wagner. He also boldly claimed that “dictatorship is a curatorial project” and that documentation of such projects invokes nostalgia for the ephemeral event. I think he also made a quick reference to the experience of watching live sports (that is, in a stadium or arena) without hearing the play-by-play analysis and color commentary from a radio or television broadcast.

Since Groys’s keynote contained significant chunks of a previously published essay, “Entering the Flow: Museum between Archive and Gesamtkunstwerk,” I was able to grasp several of his ideas afterward—and they are good ones.1 First he establishes that art museums traditionally removed works of art from the flow of time “to resist material destruction and historical oblivion,” which are precarious, unstable, and finite things that happen to humans or to things not saved in archives. Groys’s cumulative argument elaborates on Wagner’s notion of an author’s self-sacrifice in the Gesamtkunstwerk, which he likens to suicide, and how the kind of curatorial project popularized by the Swiss exhibition maker Harald Szeemann—something Groys calls a “temporary curatorial dictatorship”—has displaced the traditional art display and transforms into a new Gesamtkunstwerk that returns to art its provisional status. An exhibition goes on view for two or three months, he said of the typical institutional calendar, and then is dismantled. The art museum has consequently responded, as written in the essay, by becoming “a stage for the flow of art events … which include not only curatorial projects, but also lectures, conferences, readings, screenings, concerts, guided tours, and so forth.”

What’s novel about the précis is how Groys postulates that the internet doesn’t embody the flow of time but rather, with its innate characteristics of surveillance and traceability, halts that flow. The documentation of museum events, he argues, whether a catalogue, film, or website—or streaming video, as his keynote was broadcast live online—is absorbed into the artwork. (Oh, process.) One crucial function for art museums, Groys concludes in the essay, will be to provide a space for an encounter to both take place and be “thematized and critically theorized.” The published text expresses a few more good ideas, but I’m not sure how to understand my experience of listening to Groys speak—during which I took few written notes because of his illegibility—to the written documentation I read later and can more easily remember. 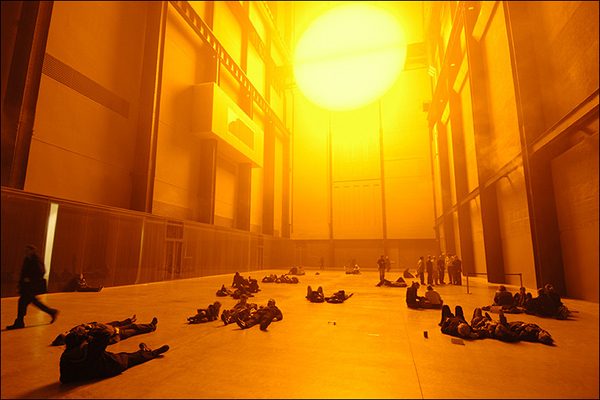 Olafur Eliasson created a giant sun using mirrors, light, and mist for The Weather Project (2003), which he said was the basis for exploring ideas about experience and mediation. Within two months the installation at Tate Modern in London had attracted more than one million visitors

After his talk Groys was joined by the art historian Claire Bishop for a brief conversation and audience Q&A. She pressed him to talk more about the “suicidal dictator,” but he deflected the question, instead focusing on linking important curators to political leaders. “When you speak about Szeemann,” he mused, “you talk about Caeser, Alexander the Great.” Is reenactment a form of documentation? No, Groys said to Bishop, marking the former as a kind of fiction that the latter lacks. Curiously, Bishop told Groys that his writing has a polemical quality but does not advocate or criticize, which may reflect the lack of a straightforward position on the entertainment-industrial complex described in his essay.

From his chair in the audience Dieter Roelstraete, a curator from the Museum of Contemporary Art, Chicago, was pleased that Groys identified visitors as the most interesting objects in an exhibition (a statement absent from the published essay). What about wall labels, asked Roelstraete. What about exhibitions without visitors? “It’s good,” Groys smiled while regarding the second inquiry. With a show that no one sees, he suggested, the curator becomes a legend, which corresponds to his idea of the suicidal curator as discontinuous and immortal. Natalie Musteata, a doctoral student in art history at the Graduate Center (and also one of three organizers of the conference), asked Groys if he had a similar term for the artist? The artist has the ability to subvert the curator, he responded obliquely, and also become a curator. I’m not sure Groys answered the question—perhaps he is saving his thoughts for another essay on the subject.

1 Boris Groys, “Entering the Flow: Museum between Archive and Gesamtkunstwerk,” e-flux Journal 50 (December 2013). The author had presented the essay as a lecture at the Museo Nacional Centro de Arte Reina Sofía in Madrid, Spain, on November 8, 2013.