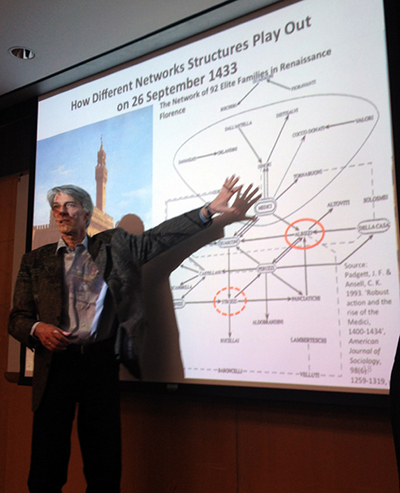 “It’s not what you know but who you know that counts” so goes the saying, which you’ve heard so many times that it’s basically become truth. But why? Among those who have investigated the issue—which sociologists call social capital—is Mark Ebers, a professor of business administration, corporate development, and organization at the University of Cologne. During a recent talk at New York University, he attempted to explain what social capital is, how it works, and what its effects are. Basically, Ebers stated, social capital is resources gained from networks—an incredibly vague, nebulous definition that begged for explanation.

Ebers summarized several conclusions about social capital theorized since the early 1970s: who you know is categorized as strong and weak ties, and how you know them affects brokerage and closure. A strong tie would be a close family member or business partner; weak ties are composed of acquaintances and professional colleagues. The sociologist Mark Granovetter examined how social capital helped people find jobs, apartments, and instructors (such as a piano teacher). People with strong ties know the same things, Ebers said. Aficionados of medieval lutes will have read the same books. In contrast, weak ties have dissimilar interests. A musicologist conversing with a physicist can generate new knowledge—and possibly social capital—for each person. Through empirical evidence, Granovetter proved that weak ties are better for a job search; they also favorably influence salary and promotion. Getting $50,000 in funding for a start-up, Ebers said, typically originates in a strong tie.

Brokerage, according to the sociologist and strategist Ronald S. Burt, describes negotiations between two separate networks. A broker, Ebers explained, helps to avoid redundancy, foster innovation, and serve as a gatekeeper. This is good, he continued, for an entrepreneur like Steve Jobs, who worked with diverse groups of people and drew upon distinct individual spheres of knowledge to realize his vision. Jobs was an interesting example: because although companies like Apple and Google benefit tremendously from collaboration and experimental production on the inside, its final products enforce an exclusive ecosystem that discourages the use of other kinds of hardware and software.

The social scientist James Coleman, an early adopter of the term “social capital,” theorized closure and established the concepts of dense connections (in communities) and network closure (a situation in which everyone is inextricably connected). Drawing from an essay published in 1993, Ebers discussed how the strong and weak ties of Cosimo di Giovanni de’ Medici (1389–1464) served the Florentine banker well on September 26, 1433.1 On this day several families in the Italian peninsula with loose associations—the Strozzi and Albizzi among them—considered toppling the Medici-approved government in what could have been, Ebers proposed, the Tahir Square of its time. Because support for the coup was lazily organized, Cosimo was able to mobilize his own allies—which did not have ties with each other but only to the Medicis—and halt the rebellion. Ebers, though, is interested in business, not history. What happens when, for example, the Eindhoven-based Dutch corporation Philips transformed its closed research laboratory into an open campus in which a hundred other companies were invited to set up shop, with knowledge (and presumably profits) shared among everyone? 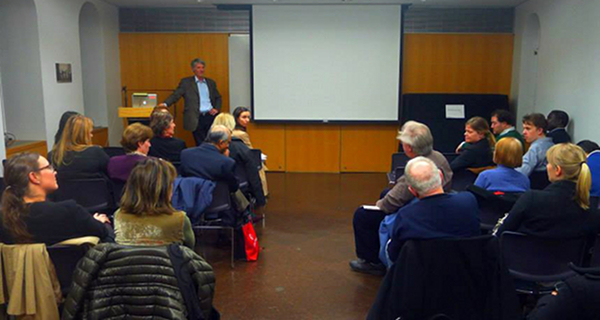 Ebers’s published research has explored how social capital transforms and exploits knowledge from within a company and how that same company acquires and assimilates knowledge from the outside. Studying the development of six biotech start-ups in Germany, he found that the less-successful companies had reached “relational and cognitive lock-in” because their founders—who were scientists—perceived themselves as scientists whose business plan called for funding for research with the goal of presenting papers in successively more prestigious academic conferences, achieving success in the wrong venue.2 “We have a great paper,” these scientists would say, but the venture capitalists supporting them responded with a colossal “So what?” The more successful firms, Ebers discovered, had avoided institutional inertia by establishing diverse relationships in scientific, political, financial, and administrative communities; they also better divided the labor within each company, with certain leaders taking on specializations in these areas. One founder of a successful biotech, Ebers said, had a father in finance who had supplied advice; connections were also made with regulators in government.

An audience member asked if a certain type of product from, say, a pharmaceutical firm, would prefer development in a closed network. Apparently they do, but in a cannibalistic way. Ebers reported that Big Pharma has been buying smaller biotech firms and bringing them into the fold. Further, he said that two teams within the same company will sometimes be assigned an identical project so that two solutions are produced, the better of which may not have occurred if only one team had worked on that same project. Other times, he noted, such competition may lead to resentment.

Ebers discussed other potential and actual clashes. The boards of German companies, he disclosed, have few women and few non-Germans, which would make one assume that cognitive lock-in based on sexism and xenophobia might lead to financial downfall. Yet the merger between the Japanese automobile manufacturer Daimler and its American competitor, Chrysler, faced setbacks because of cultural differences. Still, the smaller the points of view, Ebers advised, the bigger the differences. Are Czechs and Slovaks all that different? Most definitely yes, a Czech or Slovak would believe. So, too, would residents of Manhattan and Brooklyn argue that their cultures are worlds apart.

From a certain perspective, Ebers’s conclusions seemed painfully obvious. Of course a company, biotech or otherwise, would not find success unless it diversified or segmented its approach. The scientists for whom research—and not a product—was a top priority were doomed to struggle. Likewise, a designer building a smartphone app would need to marketing and legal advice, unless he or she wanted to lose a patent or copyright. It would only be remarkable that Ebers had found evidence to the contrary. Moreover, the concept of social capital—like the notion of “collaboration” in the art world—is problematic because it cannot be quantified, only alluded to with anecdotal evidence. As the sociologist Ben Fine has written, “Almost any form of social interaction has the potential to be understood as social capital. As a positive resource, it is presumed to have the capacity to facilitate almost any outcome in any walk of life, and to be liquid or fluid across them to a greater or lesser extent. And it is equally adaptable across subject matter, disciplines, methods, and techniques, at least within the social sciences. In short, in principle, and to a large (if selective) degree in practice, social capital can be anything you like.”3