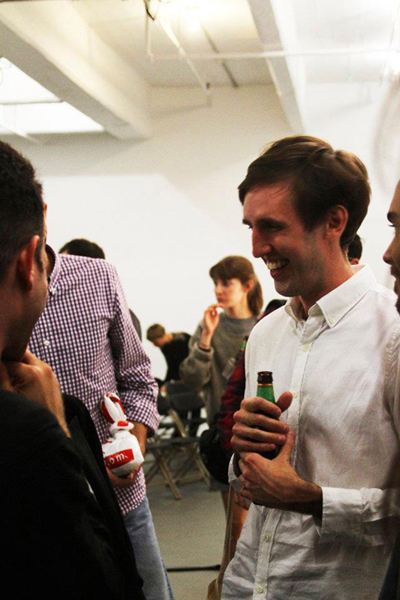 Philippe Vergne wasn’t kidding when he introduced the evening’s speaker, the artist Richard Aldrich, by declaring, “A world of words is present in your work.” Vergne, director of the Dia Art Foundation since 2008, also stated that any one work by Aldrich, a painter who sometimes incorporates text into his spare canvases of splotchy colors and sketchy lines, contradicts the next. Each piece, continued Vergne, requires its own language.

Talking a mile a minute, Aldrich has plenty of words to spare. His presentation for the Artists on Artists Lecture Series, this time on Walter De Maria, a sculptor and composer best known for The Lightning Field (1977), was largely unscripted, though Aldrich occasionally referred to a written list of topics to cover but jumped frenetically from one idea to the next, often starting a new sentence without really finishing the previous one. The lecture wasn’t so much stream of consciousness as it was a machine-gun sputtering of thoughts. He kept up this relentless pace for about a half hour, a performance of sorts that reminded me of the opening verse of a song by the Fall: “I drank a jar of coffee, then I took some of these, and now I’m totally wired!” By “these” I think the singer, Mark E. Smith, means amphetamines.

Aldrich had worked for Dia in its exhibition space on Twenty-Second Street from 1999 to 2004, initially as a guard before upgrading to the bookstore. His “graduate-school education” came during his time there, absorbing the images and texts that helped him to historicize art (he holds just a BFA). The following few paragraphs, which I constructed from my notes, do not attempt to provide a narrative but rather give a jumbled chronology of Aldrich’s ideas from the order in which they were received. 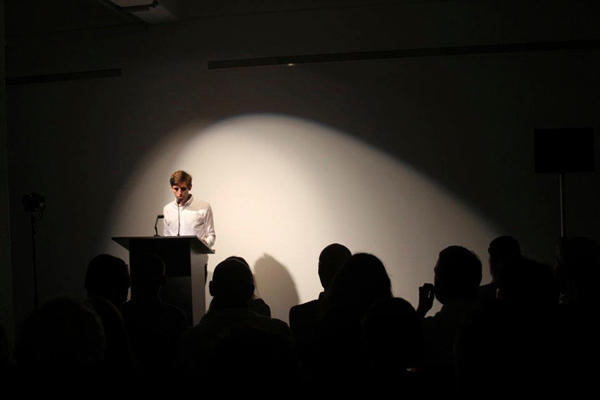 Aldrich claimed there are no books on De Maria except for the Dia one, and there’s also a CD containing Ocean Music (1968), which, as the title indicates, plays ocean sounds for thirteen minutes before fading into the artist’s drumming. For its companion piece, Cricket Music (1964), drumming begins the piece, transitioning into the sound of chirping crickets after a while. Fabricate the past because you don’t remember. De Maria was the original drummer for the Velvet Underground [it was actually a precursor band, the Druds, with Lou Reed and John Cale]. The Velvets and Sonic Youth, Aldrich claimed, are all the reasons a twenty-three-year-old  needs to move to New York. He had a record label—which means he had about a thousand dollars to burn—with three or four releases already. De Maria was crazy about controlling photographs of his work, which is why you don’t see reproductions often. A snooping Dia Foundation polices his images on the internet. 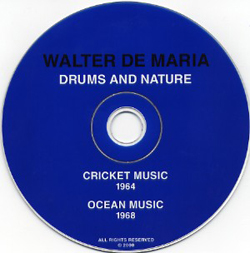 Walter De Maria self-released Drums and Nature in 2000, but the disc is out of print

A while back Aldrich wanted to reissue the CD on his label, so he nervously called De Maria on the phone, with a script in hand to read. Barely a few words into his pitch, Aldrich heard the phone click dead. He almost didn’t call back but did, and De Maria told him, “I think I accidentally hung up the phone.” The older artist said that Aldrich should call him about the proposal again in a year, so he did, and then asked De Maria if he could write him a letter, which he did too but never heard back. The rerelease never came out.

With a warmth in his work unlike most Minimalists, De Maria comes up every couple years, changing Aldrich’s understanding of him. A case in point was when he recently discovered the yellow painting that was included in the legendary Earth Works exhibition at Virginia Dwan Gallery in New York. Its title is The Color Men Choose When They Attack the Earth (1968), according to a plaque affixed to an incredibly wide canvas. De Maria later made similar works in red and blue [in 2011]. He phoned in the Dwan work, which was painted not Caterpillar yellow but John Deere yellow.

At this point Aldrich stalled, pressing a pen against his head before commenting randomly on Robert Morris’s gray plywood sculptures first shown in 1964: “Everyone knows what an L is. They know these objects.” Then Aldrich said, about the Yellow Painting, that it’s not the work that matters but the shift in understanding. Then he named a couple other works, such as The Vertical Earth Kilometer (1977) in Kassel, Germany, and relayed his observation about the weird air and smell in The New York Earth Room (1977)—which Aldrich considers the quintessential earthwork and Minimal installation. 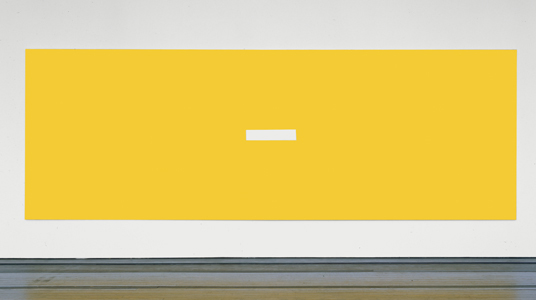 Vitamin P, a book published by Phaidon in 2002, was preinternet in a way, Aldrich proposed, with its vast collection of images. It made him think about the ways things look versus act versus function. It takes De Maria a long time to do things—this slowness breaks down the way art is digested.

“Does anyone have any questions about … anything?” he abruptly asked, shaking the audience from its spell. Someone wondered about De Maria supposedly never touching his work. Aldrich’s answer leaned on a fact he learned while reading the artist’s Archives of American Art interview, in which De Maria said his girlfriend was a fashion illustrator and that he wanted to emulate the lightness of her work. Aldrich saw the film Hardcore (1969) at the Whitney Museum of American Art. “I don’t really have a record label anymore,” he joked. “I sold it for millions of dollars.”

The hidden part of De Maria’s work is time, or the potential for other things. The artist takes something so blatant and ignores it, like the sculpture at Dia:Beacon, with balls that roll within the shapes of a swastika, a cross, and a star. Skul is the name of Aldrich’s record label. He hilariously mistitled several De Maria’s pieces, especially The Kilometer Where You Can’t See It in Kassel. These delays and shifts in meaning—Aldrich needed help from elsewhere, like from those in the front row, who he looked to several times for answers. 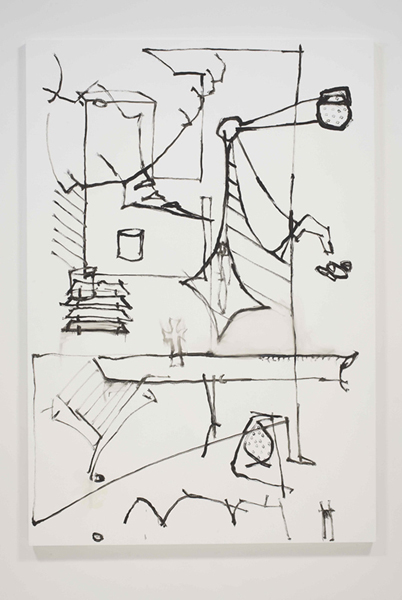 Another attendee asked Aldrich if he thinks De Maria is cultivating a persona, though not a false persona intended to deceive people. The speaker said he doesn’t know this, except that De Maria is soft spoken and calm. Aldrich briefly described the plot of Hardcore: it contained the camera zooming out from the close-up of a cow and two cowboys, played by De Maria and Michael Heizer, shooting guns at each other.

Walter De Maria: Trilogies is on view at the Menil Collection in Houston, Texas. In the spring, the Contemporary Art Museum Saint Louis hosted an exhibition of Aldrich’s work, called Richard Aldrich and the 19th Century French Painting, in which he displayed four works by older, historical artists next to his own. At the time of this lecture, Aldrich had paintings on view in New York in a solo show called “Once I Was…” at Bortolami Gallery, and the San Francisco Museum of Modern Art opened a survey of his work this month.

Audio of Richard Aldrich on Walter De Maria was recorded as part of Dia’s Artists on Artists Lecture Series.