Language Is a Virus 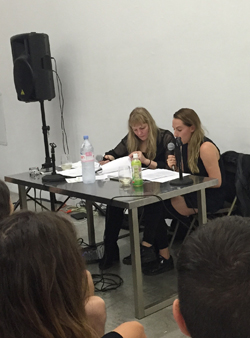 Dora Budor reads from her notes (photograph by Christopher Howard)

This conversation between the Croatian-born artist Dora Budor, whose science-fiction-inspired installation Spring was on view in the Swiss Institute’s basement, and Chrissie Iles, a film curator at the Whitney Museum of American Art, lasted only forty-five minutes. To some in the audience, it felt like an eternity. While the discussion started out informative—Iles sketched out a history of science fiction from its nineteenth-century origins in literature to its adoption by cinema in the twentieth—it slid steadily into unintelligibility. By the end of the event, Budor and Iles had made hash of potentially exciting topics, among them the relationship of human bodies to technology and the impact of computer-generated imagery (CGI) on perception, with maddeningly convoluted and directionless statements. It wasn’t pretty.

It was funny, though, pitiably and perversely so. At one point Budor was expounding on the director David Cronenberg’s notion of cinematic bodies being or behaving like a virus, which he probably borrowed from William S. Burroughs, who described written language as a virus. “If you look at the virus, it’s just doing its job,” Budor insisted. “It’s just trying to live its life.” Cronenberg was among the many names she dropped; others were the German doctor and designer Fritz Kahn, the film theorists Darko Suvin and Donna Haraway, the artists Martha Rosler and Robert Smithson, the philosophers Manuel DeLanda and Slavoj Žižek, the interdisciplinary artists Lynn Hershman Leeson and Nam June Paik, and the filmmakers Aki Kaurismäki and Andrei Tarkovsky. Budor seemed more eager to cite other people’s ideas than to develop her own thoughts on art, film, and philosophy—to the extent that I wondered if all the theory she had absorbed has, like a virus, taken over her mind.

For much of the talk, Budor and Iles read from, and based their comments on, written documents on the table in front of them. At times they seemed to be talking at each other. When the speakers went off script, they lost the plot entirely. Here is Budor toward the end of the conversation:

In cinema [Žižek is] saying nothing is spontaneous and natural of human desire, that our desires are artificial, and instead of giving us what we want, the cinema teaches us, or tell us, how to desire. Desire in this way … inscribes itself onto reality and becomes another sort of protrusion or a wound of reality, and that’s where the art of cinema comes. It’s consisting of an arousing desire of playing it back.

Just after that, Iles asked Budor something about eroticized machines, to which the artist responded: “Cronenberg always plays with this idea that something is protruding the body and creating another type of desire, another type of desire that might not yet exist,” which somehow relates to the cyborgization of the body. Iles had her own ideas: “Our experience of light—absorption of it, acceptance of it—is much higher than it was even ten years ago,” she astutely observed. “There’s also different ways in which light, be it intellectual or otherwise, has a very proper relation to the city, to architecture, and therefore different ways in which the body is constituted through that cyborgian relationship to technology and energy and, um….”

Budor could not be stopped. Thinking of Kaurismäki’s description of analogue cinema being light and digital cinema being pure electricity, she announced:

The electricity and how the intensity of the screen, the intensity of the light that you mentioned, has rose up so we can tend to consume more light, and there is way more entropy caused by that. So, what are the things which make cinema alive? This idea of pressing play or starting the machine—which will run, which will use electricity, which will use light to make something alive—is in a way very similar to all of our environments, of the light that is in this room, the hot water that we drink. The flows of energy are pretty much similar wherever you look, either in the fictional world or in reality. And the environments which we have created and animated, environments are created in a way looking at our bodies, so we can program the world around us to—in a similar way of the industrial palace functions—to program the world around us to actually correspond to the flows in our bodies.

How did we get here? In her introductory remarks, Iles argued that failed political revolutions in Europe during the long nineteenth century caused people to imagine better, more humane worlds, first expressed through literature and then cinema. Time travel comes from an ideal, utopic way of thinking, Iles contended, and so we get things like H. G. Wells’s novella The Time Machine (1895) and Robert Zemeckis’s blockbuster film Back to the Future (1985). Not everything Iles said made sense. The popularity of science fiction, she told us, hot in the 1950s, declined significantly in the 1970s, and rose in the 1980s. If that’s true, how does she account for major films such as A Clockwork Orange (1971), Sleeper (1973), The Stepford Wives (1975), Star Wars and Close Encounters of the Third Kind (both 1977), and Invasion of the Body Snatchers (1978)? It was as if nothing between 2001: A Space Odyssey (1968) and Blade Runner (1982) had any impact on culture. To her credit, Iles cited “climate science fiction” as a new genre about cataclysmic changes to Earth—no aliens or monsters there. 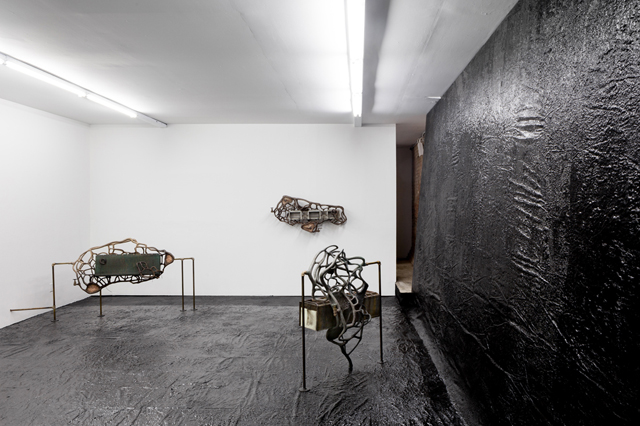 The sci-fi overview framed the discussion of Budor’s installation, which consisted of four sculptures in a brightly lit room whose floors and walls were partially covered with some kind of blobby black resin (in fact, flexible polyurethane foam with black pigment). The discrete pieces, titled Our Children Will Have Yellow Eyes, What Kind of a Person Does This, Slow Ticking of the Callous Mind, and One Million Years of Feeling Nothing (all works 2015), meld steel pipes, latex prosthetics evoking an organic body, and an epoxy clay lattice network that looks like a circulatory or digestive system—they’re very strange. Each sculpture has a found object—a “screen-used miniature”—that appeared in three vintage science-fiction-type films: The Fifth Element (1997), Johnny Mnemonic (1995), and Batman Returns (1992).

Budor defined her approach as “not of making works but making worlds.” But her art doesn’t come from her imagination—it comes from other sources. While the presence in her sculptures of these miniatures, which studios typically sell after using them and which make their rounds at trade convention shows, may impress fans of the movies, they act as excess cultural baggage for works that ought to stand on their own merits, triggering their own associations. I’ve only watched one of those three movies, so learning the origins of the miniatures soured the exhibition for me. Visual elements that had briefly been full of interpretative possibilities were suddenly foreclosed.

To Iles, the “sinister black goo” covering the wall and floor—a work in itself, called Chinchorro People—represents a contamination. Budor named the piece for the several-millennia-old Chilean mummies that have succumbed to decomposition that one scientist reports is caused by microorganisms activated by global warming. (Budor also said the alien virus called the black cancer from the television show The X Files informs her work.) The mummies are actually turning into black goo. So it makes sense that Budor identified infection, the reanimation of the body, and the body combined with inanimate matter, as central tenants in her show. Iles interpreted the black goo psychoanalytically and symbolically, saying something about how its ambiguity represents a collective fear of the power of technology blurring boundaries. Going deeper, she argued that cities are huge machines that constitute the organic human body and its subjectivity (huh?), and that Budor’s sculptures reflect this cyborg nature. And going even deeper than that, the miniatures in Budor’s installation reverses the flatness of the film screen, Iles said because we look at these objects frontally, not yet manipulated by camera placement, which make the miniatures appear larger and more impressive—precisely the reason why they exist in the first place. 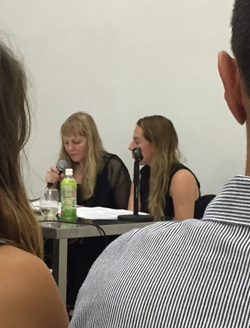 Chrissie Iles reads from her notes (photograph by Christopher Howard)

Neither Iles nor Budor could sufficiently explain the importance of revealing the mechanisms of Hollywood cinema, when everyone knows that special effects are designed to simulate a plausible reality, whether that’s a painted backdrop or pointy ears or computer graphics. Or an Instagram filter. “We are getting used to looking at unnatural, composite bodies,” Iles stated, “and at the same time we want our bodies to become also more perfect.” Discussions of this sort have taken place for decades; the difference now—which is true for any present moment in time—is that we are closer than ever to a normalized cyborg or android body. Contact lenses and organ transplants once wowed people. Now paralyzed people can move computer cursors with their mind, and 3D printers can generate customized artificial limbs. That’s progress, right? Similarly, Budor found it earth-shattering that movie franchises create their own character universes: “It’s interesting when fiction kind of totally loses its history in a way,” she said, “and starts finding that history in itself.” The notion of continuity between movies, as well as canon-formation across films, books, animated series, and the like, isn’t terribly hard to grasp.

If my recounting of Budor and Iles’s ideas above makes sense, it’s because I listened to the audio of the conversation twice, after hearing it firsthand at the Swiss Institute. I don’t think difficulties arise because the artist and curator operate at a much higher intellectual level than me; instead, they exist because neither of the speaker had the ability to communicate coherently, much less effectively. They presented what are probably ordinary ideas with overblown rhetoric, backed by obtuse extractions from other people’s theories, that seemed to alienate the audience. It was telling when the Q&A session yielded no inquiries from the audience. None at all.