The Butcher, the Baker, the Exhibition Maker 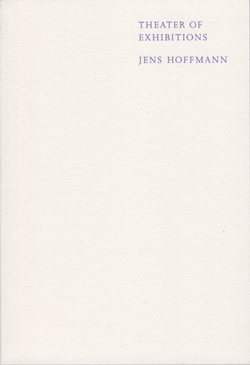 Theater of Exhibitions, a slender new book by Jens Hoffmann published by Sternberg Press, offers fifteen brief chapters on curatorial work. While Hoffmann, a 41-year-old curator, writer, and deputy director of exhibitions and programs at the Jewish Museum in New York, rarely mentions specific works of art, he discusses his own exhibitions and criticizes—in a casual way—the alliance between museums and the wealthy, the blandness of international biennials, the overproduction of artists, and the extension of curatorial work into publications, conferences, screenings, and workshops. Unlike Hans-Ulrich Obrist, whose recent reflections on the profession were published in Ways of Curating (2015), Hoffmann is not a storyteller. Instead he writes gently provocative essays that immediately make you agree or disagree with him. Theater of Exhibitions summarizes his thoughts on recent history of curatorial work, with his academic background in theater in mind (but the text make relatively few connections between curating and the dramatic arts).

For a book launch at the Swiss Institute, Jessica Morgan, director of the Dia Art Foundation, asked Hoffman point blank: “What drove you to write this book?” The curator traced his inspiration to a class he taught at Konstfack in Stockholm, Sweden, which provided students with a history of exhibitions and practical curatorial knowledge. The experience led to the organization of Exhibition Squared (2001) at the International Artists Studio Program in Sweden, which took twelve shows of the 1990s as its subject. I wondered if Exhibition Squared was also the inspiration behind Hoffmann’s previous anthology, Show Time: The 50 Most Influential Exhibitions of Contemporary Art (2014). 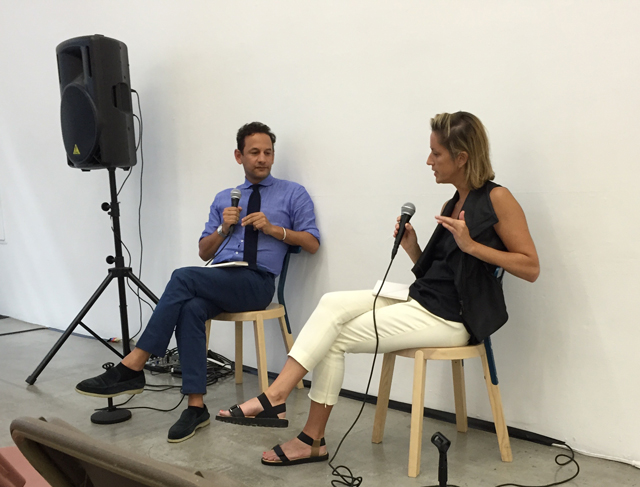 Morgan observed that Hoffmann’s shows unfold over time, which harmonizes with the tempo, dramaturgy, and setup of theater. He said he did “small things in a very small theater in Berlin while I was still studying” in Berlin and felt an affinity with the live-action works of Tino Sehgal, Liam Gillick, and Dominique Gonzalez-Foerster, all artists who use the exhibition as a medium. Morgan quizzed Hoffmann about working with designers. Hoffmann said communications such as graphic design often become invisible because we are used to it. Design can give form, shape, and consistency to an exhibition, he said; it is also a tool, like analogue film or a type of camera lens. Hoffmann said he has collaborated with the same designers on his shows, which makes sense considering his long-time stints at the CCA Wattis Institute of Contemporary Arts in San Francisco (2007–12) and the Institute of Contemporary Arts in London (2003–7).

Do you encounter resistance from artists, Morgan asked Hoffmann, who is known for strong thematic shows. “I’ve never heard about any complaints,” he replied, “but you never know what goes on behind closed doors.” Everyone laughed. Artists appreciate him doing something different, such as when he offered a trilogy of Wattis exhibitions based on classic American novels—Moby-Dick; or, the Whale (1851) by Herman Melville, Adventures of Huckleberry Finn (1885) by Mark Twain, and The Wonderful Wizard of Oz (1900) by L. Frank Baum—that were “very heavy on the staging.” For instance, he said, the Moby-Dick exhibition included audio recordings of the filmmaker Orson Welles reading excerpts from the book at several points as a narrative device.

Blaming the self-sustaining machinery of Big Academia hinders the evolution of the curatorial profession, Hoffmann suggested that students get doctorates philosophy, anthropology, and art history instead of the ubiquitous master’s degree in curatorial studies. He isn’t aware of any graduate program in curatorial studies that does not focus on contemporary art, yet he conceded that the most growth and most creative exhibitions involve exactly that. The journal Hoffmann founded, the Exhibitionist, first published in 2010, initially attempted to start conversations about exhibition making of all types and eras, but Hoffmann discovered that readers and writers lacked an interest in older art. “That’s a big barrier that has to be penetrated,” he said, “or maybe not.” I agree with the former: curators should look at not only displays of historical art but also those in museums of fashion, science, natural history, and the like.

Morgan questioned Theater of Exhibitions (exceedingly banal) promotional phrase, “art after the end of art,” which surprised me since the book’s largely resists affirming art-world trends and myths. Nevertheless, he cited Arthur C. Danto’s and Hans Belting’s writing on the subject from the 1980s as a source but then asked, “Why are we still looking at fairly traditional artworks in 2015?” Because, Jens, such proclamations about the end of art, painting, history, irony, or whatever, are always overstated. 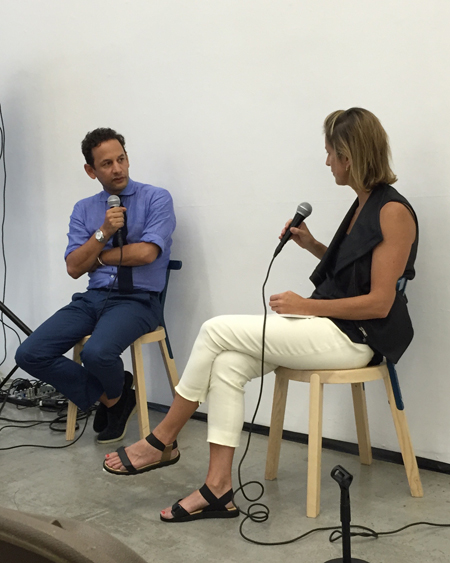 The curatorial role in museum acquisitions is not discussed as frequently at public-facing exhibitions. Hoffmann criticized Dia’s elitist approach for collecting only “ten genius artists” who make Minimalist and Postminimalist work that is alienating to audiences. To her museum’s defense, Morgan argued that Dia:Beacon’s cavernous space is more inviting to skeptics. What concerns her is how institutions collect contemporary art without an endpoint, and how these objects will be shown or stored. When the art world was smaller, Morgan and Hoffmann determined, museums had less product to choose from and as a result were more selective. With MFA programs releasing hundreds of artists into the world annually, that is not the case now. Hoffmann argued that some artworks have temporary relevance, such as Richard Prince’s Instagram paintings, which can be shown in temporary exhibitions and then returned, while Prince’s Marlboro Man photographs have lasting value and belong in a museum collection.

In the Exhibitionist, curators evaluate their past work, responding to their exhibitions years after they closed. Yet these essays, as well as Hoffmann’s Theater of Exhibitions, don’t consider external assessment in the form of published criticism—and the exhibition review in particular—as if written responses to exhibitions from the interested public do not matter. An artist, musician, or actor may decide not to read reviews, but a curator ought to consider them essential to their professional growth.