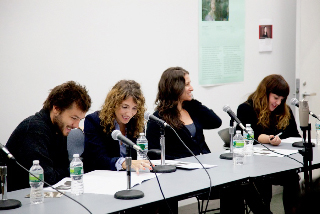 “Is it possible to define a cogent code of ethics in art writing?” asked the promotional statement for this panel, presented by the MFA Art Criticism and Writing Department at the School of Visual Arts. The answered offered by the giddy, often flustered moderator, Aimee Walleston, a graduate of the program, was something like “I think, um, I don’t know. It’s an interesting thing to think about!” Halfway through the panel she admitted that “Toward an Ethics of Art Writing” was only a jumping-off point, the start of a conversation, using a phrase that usually indicates not only historical amnesia about the topic under consideration but also the avoidance of taking a firm position, forwarding a logical point of view, and offering a risky idea or two. The panel was an unequivocally lukewarm affair.

After allowing for biographical introductions, Walleston started strong by asking about remuneration. Adam Kleinman, a critic for various American and European publications, immediately said  that a writer’s labor is devalued if he or she isn’t paid, and that writers shouldn’t exploit themselves for a potential jackpot prize later in their careers. The others generally concurred, with the Swiss-based poet and critic Quinn Latimer providing an anecdote in which the editors or publishers of an Italian art magazine (probably Flash Art) were asked at a recent conference if they paid their writers. “Unfortunately, yes,” they replied. Patricia Milder, a critic of art and performance who works as a managing editor for the Brooklyn Rail, a publication that historically has depended heavily on volunteer labor, talked about creative freedom in relation to income (though ideally no trade-off should exist). Walleston later noted that she maintains a separate economy—I took this to mean a day job—to pay her bills, which graciously permits her to keep her writing pure.

Except for Kleinman, the panelists were hesitant to discuss the ethical implications of free labor and making a living as a writer, or not. Publications should pay writers, those that do not should justify their decision, and writers must avoid exploitative situations—ideas like these, more common sense than radical, went largely unheard. I wish the panel could have taken the lead from F Newsmagazine, produced by students at the School of the Art Institute of Chicago, which recently addressed the issue frankly: see “Getting Paid: Chicago Art Critics Talk Money” and “Getting Paid, Part II: How They Do It in New York.” Though the information in two other publications, The Visual Arts Critic: A Survey of Visual Arts Critics at General-Interest Publications in America (2002) and Reporting the Arts II: News Coverage of Arts and Culture in America (2004), is old, it might have led to interesting departures.

The SVA panel found other, more innocuous topics, about a writer’s process and practice, worthy of discussion. Do you think it’s good for a critic to express negativity? How has your position at [various magazines or papers] affected your writing? Not unexpectedly, the participants took a few weak jabs at “academic writing,” itself a trite subject. Readership came up. Kleinman reminded the audience that French newspapers have no illusion about journalistic objectivity—you buy a certain paper knowing its slant. Walleston uttered something about a utopic idea of community, but this doesn’t mean attending gallery dinners (a potential minefield of compromise for writers) or thinking about the reader, for whom she disclosed she doesn’t consider when crafting her pieces. Though the audience for writing on art is small it’s not insignificant: reading the stuff regularly are artists, historians, curators, collectors, students, dealers, gallery employees, museum educators, arts administrators, casual and serious art lovers, friends and family, and, of course, fellow critics. If these people matter, is it ethical to disregard them when writing?

The panel drifted, unmoored but not without interest. The participants generally agreed that writing on art needs style, substance, and sophistication to stand on its own, and they recalled their experiences of editing and being edited. Latimer brought up the only ethical concern here—when the editor is a friend of the artist under review—but did not elaborate on the situation. (In fact, the panelists rarely mentioned the names of specific writers, artists, and publications in their anecdotes.) What’s the difference between writing and curating? Matthew Schum, a critic and a doctoral student at the University of California, San Diego, lamented curators with loud barks and tiny bites, and Milder demarcated the exhibition maker’s role as an advocate, in which the curators must emphatically support the work of lesser artists, from that of the writer, who should take an independent view.

Latimer, whom some think writes as a steppingstone to becoming a curator, asserted that critics don’t write press releases. Though she meant that critics should not produce writing that is mere publicity, the notion leads to other potential topics: Can a critic do double duty in marketing (as a day job) or under the employ of a gallery, either by writing a catalogue essay or a press release? Is it possible for these platforms to provide a critical slant or creative approach? What might distinctions among critics, journalists, and the nebulous term “writer” mean for a person’s professional stance? Must that stance always remain so rigid, or do different situations call for alternative approaches? These issues as they apply to ethics would have been worth discussing, especially considering Tyler Green’s witch hunt in January 2008 that led to the dismissal of Christian Viveros-Faune at the Village Voice, because this perceptive critic simultaneously worked for two art fairs but did not disclose the information to his supervisors. (Viveros-Faune also wrote excellent reviews for the New York Press in the early 2000s while a partner at the Brooklyn gallery Roebling Hall.)

The moderator could have lined up additional examples of impropriety for the panel, perhaps even expanding the panel’s topic usefully. A 2007 exposé by Jen Graves for the Stranger accused the Seattle critic Matthew Kangas for shaking down artists about whom he wrote to build his personal collection. In another article, Green found it highly questionable that the Whitney Museum of American Art could hire an employee from a commercial art gallery to help organize the next biennial. Walleston’s panel might have offered an opportunity to distinguish between conflict of interest and the appearance of conflict of interest; to discuss artists who write criticism and their motivations, entanglements, and advantages (what’s the difference between word-of-mouth recommendations and cronyism?); and to debate whether or not nonprofit organizations are barred from hiring someone who most recently worked in a similar but for-profit job. Collecting by not just critics but also curators could have cooked up juicy dialogue. For example, in the pages of Art in America this past September, the curator Jen Mergel of the Museum of Fine Arts, Boston, wrote that R. H. Quaytman gave her a painting after Mergel organized the artist’s first museum show at the curator’s former place of employment, the Institute of Contemporary Art in Boston. Under what circumstances is this practice acceptable?

To the panel’s credit, one unexpected issue, relating to a critic’s responsibility to the artist and the power of his or her words, was broached. Latimer stressed that her writing is not the definitive statement on an artist or exhibition. She is also careful when her piece is the first or second on an artist, because everyone going forward will read that text. “Don’t cut their knees off,” she said, half joking but half serious. (She also quipped that when picking up a fresh issue of an art magazine, many folks flip immediately to the reviews section to see who wrote on whom—I’m certainly guilty of this.) Kleinman said he is conscious of the influence he might have on an emerging artist but is not overly concerned with it. Here is where negative criticism, which Walleston states she never does, becomes interesting.

Milder brought up quid pro quo earlier in the discussion, which was griped about in the Q&A session. One audience member noted that music critics and travel writers get free goods, food, and travel. Someone else was concerned with the relationship between writing and the increasing (or decreasing) value of works of art. A few words about free museum admission were spoken, but no one seemed interested in the advantages of the press pass or principles regarding the complimentary catalogue received when reviewing an exhibition. It’s a strange thing: critics are immeasurably underpaid for their labor, if at all, but getting any perks is puritanically frowned upon. At the same time, to summarize Milder (I think), the art world is a place of irreverence and freedom, something any writer should delight in.

Listen to “Toward an Ethics of Art Writing” in iTunes.