Moderated by the painter Annika Connor, “Art outside the Gallery” addressed the ways in which savvy promoters can reach audiences for art beyond the traditional white cube. Connor activated the entrepreneurial side of her practice ten years ago, after graduating from the School of the Art Institute of Chicago with many unanswered questions about the workings of the art world. Back then professional development and advice for artists, through books, workshops, and classes, had not yet fully developed into the cottage industry it is today. 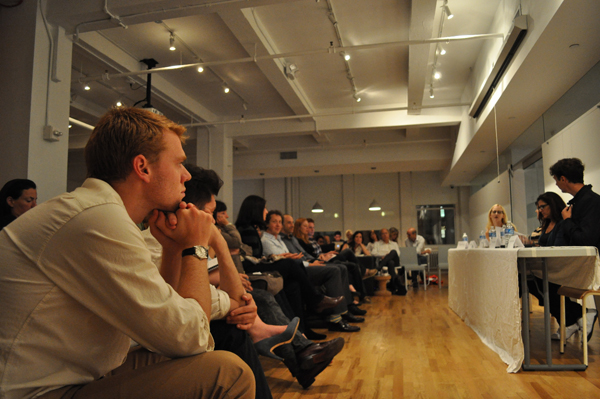 A young, sexy, and wealthy-looking crowd in their twenties and thirties gathered in the common space of General Assembly, in the Flatiron district of Manhattan. Clad largely in business casual, they did not give off the usual art-world airs, and the group was surprisingly the most racially and ethnically diverse seen since In Terms Of began publication. Tonight’s panel, organized through Connor’s Active Ideas Productions, explored several alternative avenues for publicizing art, though three of the four panelists clearly had access to deep-pocketed sources, allowing them to operate comfortably outside the gallery system.

One particular strategy for artists—what were once called stray spaces but are known now as pop-up galleries—has always been a popular do-it-yourself option for those wanting to exhibit their work in unconventional places. Jill Murphy, cofounder and director of the New York–based AD Projects, got her start in 2009. “We were answering phones at galleries where the phones weren’t ringing,” she said, a puzzling account coming from a Gagosian Gallery staffer. She and her three partners, also affiliated with the art world, hosted the first event—giving the name After Dark to their extracurricular curatorial work—in an inhabited apartment. They then staged an exhibition at a warehouse in Manhattan once used by 1-800-Flowers, a place that unexpectedly had only one electrical outlet—think on your feet, Murphy recommended. Connor interjected with a few words about her own pop-up experience in a Nolita clothing boutique, Inven.tory. With AD Projects’ growing success, Central Utah Arts Center in Ephraim invited the group to organize its first show outside New York. What was off limits in this exotic geographic region? “Don’t mock the Mormon church” was the locals’ response, though that also implicitly banned depictions of nudity, sexuality, and abjection.

Connor encouraged audience members to speak up during the panel, so someone asked Murphy about what prospective pop-up organizers should do to secure a space. Property owners are generally wary of such requests, she replied, so a curator should gain their trust, build a relationship, and, importantly, present a developed proposal that outlines key benefits for the owner, such as foot traffic. Five hundred people together in an empty space might sound enticing for someone looking for potential renters, though it’s unclear to me how many pop-up gallery attendees are typically rich collectors and socialites, and how many are poor, scrappy artists. (Might the collective No Longer Empty have the answer?) Any resulting press, Murphy noted, is also a powerful bartering tool. 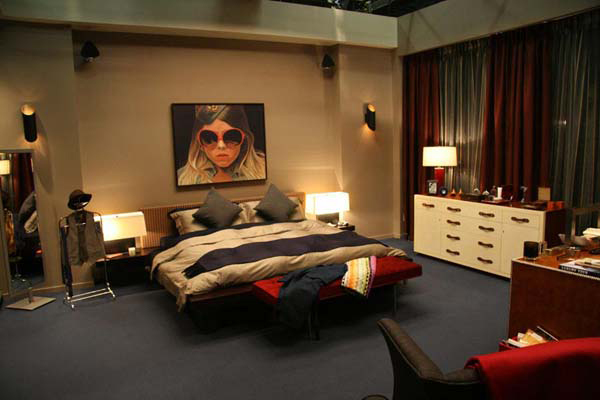 For several years kids around the world have emailed Christina Tonkin, asking about the painting over Chuck Bass’s bed. Tonkin, an interior designer and set decorator who places art for Gossip Girl, forwards them to the Art Production Fund, which since 2009 has sold prints of two versions of a Richard Phillips painting, Scout (1999): topless and cropped. At $250 a pop, they’re relatively expensive for being unsigned posters. Her curatorial selection is character driven, based on occupation, income, and background. But wait a second—isn’t everyone on the show rich, white, and living off their families’ vast inheritances? Tonkin’s contribution to the panel included discussions of sourcing local, tax breaks and corporate welfare for film and television producers, and commissioning the re-creation of a painting from the HBO series Entourage, originally made by an anonymous scenic artist, for a client who wanted what he saw in Ari Gold’s office. Her most illuminating fact was that an artist typically receives ten percent of a work’s sale price when it appears on television. The artist, though, must assign a hefty chunk of his or her reproduction rights to the studio, namely to cover distribution rights for DVD sales. 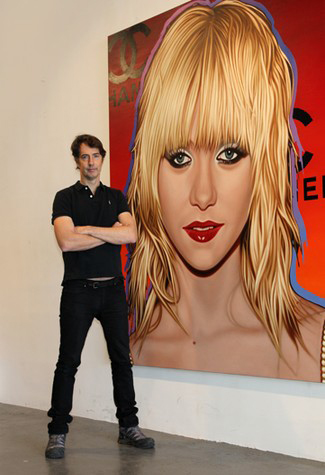 Phillips, who is represented by Gagosian and White Cube, told us that Gossip Girl initially asked him for a different piece for a certain scenario that didn’t pan out. The show eventually chose Scout and another painting, Spectrum (1998). The artist was spellbound when he first saw the life-sized reproductions of his creations on the set, a place that for him epitomized the “definition of surrealism.” Similarly, after a magazine published a pastel drawing of the British actor Robert Pattinson on its cover, igniting fan sites worldwide, he attended a film premiere for a Pattinson vehicle and became mesmerized by the world of ultracelebrity seen in close-up, inspiring him to make further work that he claimed feeds back into popular culture, continually cycling and recycling.

Episode after episode, season after season, Phillips’s imagery leaves the art world and enters the homes of millions around the globe. He relishes this opportunity, since it demonstrates how art intertwines with the lives and homes of (fictional) people. A longtime painter of sensational, mass-media images in his regular art career, Phillips claimed, wincingly to my ears, that his activity promotes art at a time when schools are canceling programs and creative outlets are narrowing. Is Gossip Girl the new Art History 101?

Flush with cash and brimming with fame, Phillips has settled comfortably into his role as a high-society artist. His Gossip Girl experience motivated a recent series of paintings and a foray into video, with two recently completed, ninety-second filmed portraits of the actors Lindsay Lohan and Sasha Grey. He advertised these products on the homepages of the New York Times and W magazine upon their release—which, incidentally, was not via a limited-edition, collectible DVD but a YouTube post. His distribution may be democratic, but the production and promotion of the works is hardly DIY or even viral. Connor called these films “racy,” with Lohan being a “teen fantasy gone car wreck” in her personal life. Phillips gushed over Lohan, elevating her as a beauty on par with Marilyn Monroe or a young Elizabeth Taylor, who he could know only through the mediation of photography and film. While the two videos lean heavily on the visual tropes of music videos, movie trailers, and television commercials, they’re intriguing precisely because they aren’t those standardized formats. The only category in which to place these seemingly self-indulgent, purposeless works is art. 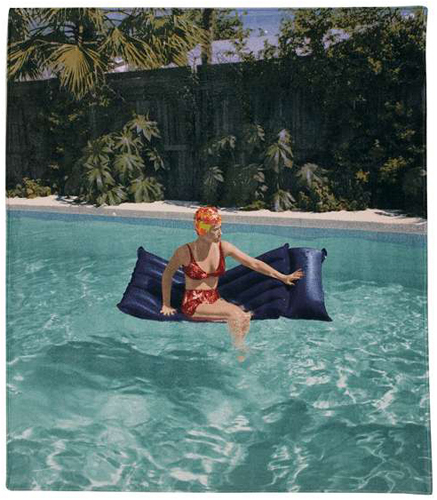 A Cindy Sherman beach towel from the Art Production Fund

“You choose to occupy media space,” Phillips remarked. Art isn’t passive decoration; it can “change the terms”—though he doesn’t define these terms and to whom they belong. The artist also did not discuss criticality or complicity, the usual way of framing art that overlaps with the culture industry; he seemed happy to be making commercially oriented work that reaches the masses. As a parallel to his practice, Phillips brought up another recent project with similar populist goals: beach towels designed by the artists Kehinde Wiley, Cindy Sherman, Raymond Pettibon, and Ed Ruscha, among others, for Target. This is another project from the panel’s unofficial fifth member, the Art Production Fund.

The sprite Carter Cleveland, a computer engineer, programmer, and cocreator and leader of Art.sy (headquartered at General Assembly), expressed enthusiasm for the inspiring panel while it explored fundamental ways to spread the art gospel. As an undergraduate at Princeton University, Cleveland had first studied physics—“I wanted to be a theoretical physicist when I grew up”—but switched to computer science halfway through. His interest in art had developed earlier, at home: his father, David Cleveland, was an art historian and writer who frequently took his son to museums. It’s not surprising, then, that the young programmer drifted toward the Art Genome Project.

Based on the same kind of “artificial intelligence” used by Google, Netflix, and Pandora, Art.sy and the Art Genome Project analyze what Cleveland called the “most exciting forms of self-expression”: fine art. In addition to linking historical and chronological facts and chronicling subject matter, color, and the like, his designers are programming Art.sy to learn from your choices, asking you about your response to a particular work. Funded and advised by prominent individuals and companies (including the Russian philanthropist Dasha Zhukova and the inventor of Twitter, Jack Dorsey), the project has goals that are neuroscientific—why do people respond to art in the way that they do?—and commercial. Art.sy creates technology that will help sell art.

Carter Cleveland (at right) speaks to the audience about Art.sy

Which isn’t a bad thing. Cleveland stated that for every one household that buys art, thirty-seven do not. (Interestingly, his statistics are based on households with incomes in the six figures.) He also brought up an interesting analogy: if you ask anyone on the street who his or her favorite singer or band is, you’ll get an immediate answer; not many folks, though, have favorite artists. The fundamental difference, he said, between music and art is the level of engagement. Five hundred years ago, people experienced art and music in the same place: the church. Music has since become mechanized, recorded, and distributed widely; art remains an in-person experience, in spite of the proliferation of images in our present moment. While it’s true that reproductions of art fail to render the real thing accurately, recorded and live music overlap but have distinct qualities.

The Art.sy project is commendable because it can aid people with disposable income who may not have realized that decorating their homes with art instead of posters is within their grasp (to say nothing of other uses of art, such as financial investment). At the same time, education in historical and contemporary art demands time that many do not have; Art.sy might act as a shortcut to deeper appreciation and understanding. On the whole, though, basic instruction in collecting, and on the structures of the art world, could eliminate barriers of entry, including the frosty intimidation some feel when entering commercial galleries.

An audience member brought up a good point: although viewing and/or collecting art is generally private and personal, people experience and transact with it in public, at a gallery, museum, fair, or auction. Shopping for art on the internet may not provide the same experience, especially in light of flawed reproduction quality, among other snags. How often will this new brand of consumer return paintings and ask for refunds within ninety days? Zappos, for example, seems to handle the situation quite well, but is that the right model for art?