In Love with Itself

A packed room rustled and bustled in anticipation of this star-studded panel organized by Hrag Vartanian, a former art critic who now edits the blogazine Hyperallergic. Vartanian truly “understands the Bushwick meme,” according to Peter P. Hopkins, the director of the Bogart Salon, a social space in a gallery building called 56 Bogart Street in Brooklyn. Not simply a “cheerleader,” Hopkins continued, Vartanian also “interrogates” the Bushwick art scene—whatever that means.

The panel comprised several prominent figures in the art scenes of Bushwick and East Williamsburg: Deborah Brown, a painter and the owner of the gallery Storefront Bushwick; Thomas Burr Dodd, the owner of Brooklyn Fireproof, a bar, art space, and performance venue in East Williamsburg; Carolina A. Miranda, an art critic and writer; and Marco Antonini, director of NURTUREart, which has relocated to 56 Bogart. 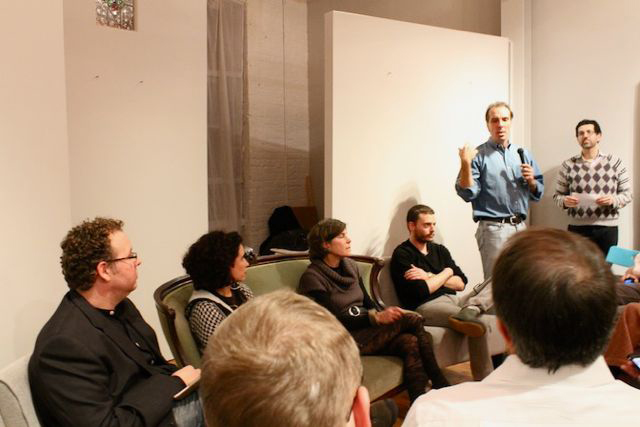 Typical discussion about gentrification, rapid growth, and a fondness for the good old days permeated the discussion. “I like Bushwick the way it was six years ago,” Dodd said. He wants bodies to frequent his businesses and rent his spaces, of course, but paradoxically wants folks to stay away. The best quote of the night came from Miranda, who claimed that “Bushwick is in love with itself”—a sentiment hard to refute. The neighborhood, she continued, houses the entry-level workers of not the art world but the art industry, a provocative statement with Frankfurt School overtones concerning topics perhaps beyond the scope of the panel.

Amid the generalized hand wringing, light complaining, and guilt assuaging, Dodd and Brown offered some enlightening tidbits about the neighborhood unlikely to be overheard in the bars and bistros. First, that police officers and city inspectors are the largest impediment toward community growth: they “squeeze you silly,” Dodd complained, levying $300 fines for finding a fruit fly in a restaurant. Second, that Brown, who is on a community board in Bushwick, where she owns property, said that the board—which boasts just two or three white members in a group of about fifty—has only begun to express anxiety over the artists moving into the neighborhood over the past couple months, triggered by “Numbers. Boots on the ground” and by the gyms and bars that are seemingly not for them. The fact that the Bushwick community board had only come to recognize gentrification during recent months instead of over the past five years was quizzically overlooked.

Brown also pointed out that a third community exists in the neighborhood, beyond the hipsters and Latinos, consisting of recent immigrants and undocumented aliens from Central and South America whose paths do not usually cross with the longtime residents whose families came from Puerto Rico and the Dominican Republic. Vartanian claimed that only one art organization appeared on Congresswoman Nydia Velázquez’s list of government-funded groups. Brown confirmed that local politicians need the white vote but pay attention to more desperate groups: starving children cry louder than starving artists.

If a major point of the panel was to have an open discussion with the audience, Vartanian apparently discouraged this kind of dialogue—at least from new voices with different perspectives—by persistently calling on his blog and Twitter pals to speak up and offer opinions. He also constantly referenced the positions of former Williamsburg art dealers Edward Winkleman, who has a sizable blog presence, and Sara Jo Romero, who were not in attendance. One young woman in the audience called attention to the DIY music scene (Market Hotel, Silent Barn, and beyond) that has coexisted with the art scene in north Brooklyn that the art Twitterati never seems to acknowledge. Why does the Bushwick art scene hate rock ‘n’ roll? 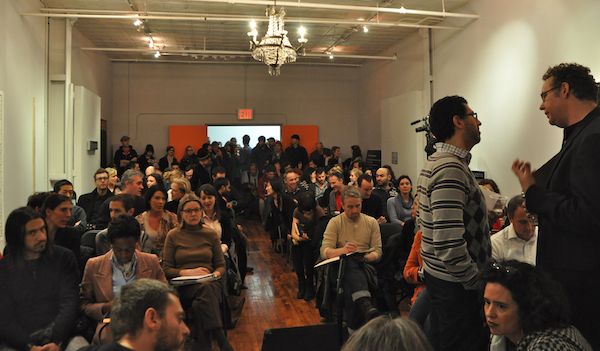 Another audience member, Jason Andrew, the leader of the local arts nonprofit Norte Maar, briefly described the art-related work he’s done with kids, schools, and other neighborhood groups through the Bushwick IMPACT program—activities that probably present art to the neighborhood more strongly and positively than a roomful of artists talking about themselves. Antonini reminded the audience of his gallery’s longstanding programs with area schoolchildren, in which kids gain an awareness of and experience with art, thus potentially making them more receptive to neighborhood artists. Antonini, who has only partied but not lived in Bushwick, said that “community” means race, wealth, and, to some extent, education.

One notable attribute of the Bushwick art scene, Dodd noticed, is that self-sufficiency surpasses commercialism, creating what he calls “micromanufacturing.” Winkleman had told Vartanian at some point that Bushwick artists are “self-conscious,” but a Bushwick-based artist recently expressed to me that they’re not self-critical enough. They’re too friendly toward each other, he said. Cooperation trumping competition can be a good thing in a post-Occupy milieu, but a lovey-dovey disposition can lack a certain spark.

All this talk about community begs the question: how much should diverse groups actually interact? It’s important to be a good neighbor, of course, but friendships, loyalties, and communities revolve around families and/or people with common interests, or people brought together by unique situations. Sharing geographic space creates a public or a population, not necessarily a community. What do artists want from their neighborhood and from each other? What do nonartists want from artists? How should they connect, and why? The panel didn’t quite address these basic notions.

“Vartanian says he hopes last night’s panel was just ‘part one’ in what will no doubt be an ongoing topic of conversation,” reports Rachel Corbett from Artnet. I left the evening’s event without a general sense of what the participants felt can or should be done. They failed to identify problems regarding intersections of art with real estate, politics, law, race, and class, let alone propose solutions for them. Instead of more conversations and additional panels, I’d like to see the Bushwick art scene’s movers and shakers actually set goals, make plans, and get work done.