Tell Me What You Know

Mostly written in March 2015, this essay was completed and published during a November 2015 residency at the Luminary in Saint Louis, Missouri. 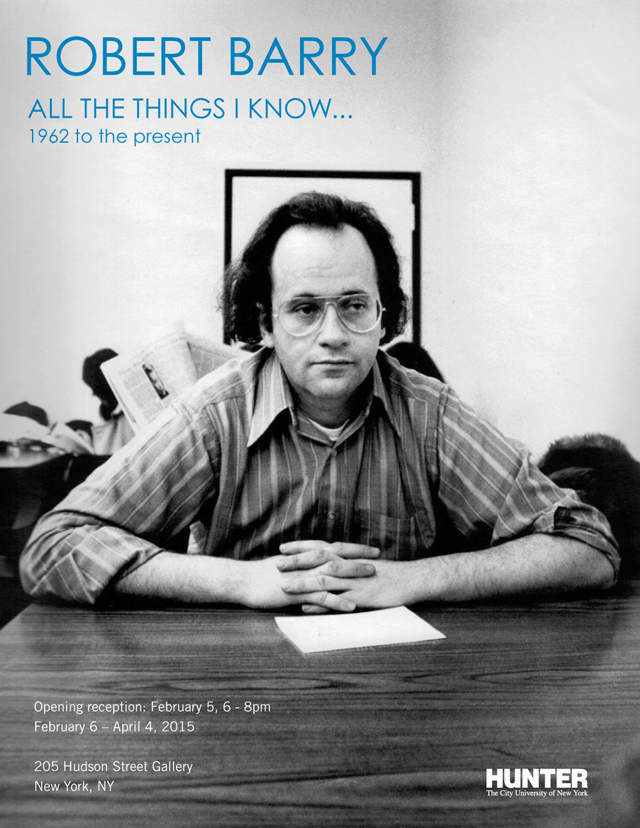 You know how lyrics from pop songs look trite and sometimes embarrassing when written down, but come alive convincingly when performed? It’s the same for artist’s talks. Some excel when presenting in public. If an artist is charismatic, unremarkable work becomes good and good work becomes great. The opposite is also true: interesting work can come across as ordinary.

The renowned first-generation Conceptualist Robert Barry is one of those artists whose work—which explores speech, memory, light, time, belief, anticipation, fragility, making connections, and states of flux and change—shines when interpretations are expanded on by others. It’s not that he’s inarticulate. Far from it—the artist speaks clearly, in a straightforward manner. But there was a lack of excitement to his reflections on a six-decade career during a lecture at the Hunter College Art Galleries, held in conjunction with the retrospective Robert Barry: All the things I know … 1962 to the present. His discussion about old and new works revealed no earthshaking revelations but offered plenty to remind you of the humanity behind the brainy work you read about in art-history books.

Born in the Bronx in 1936—and he still has the accent to prove it—Barry received two degrees at Hunter College, earning a BFA in 1957 and an MA in 1963.1 As a student, he took classes with the renowned scholar and curator William Rubin; the artist Robert Motherwell was his advisor. The art department was impressive: William Baziotes taught watercolor, Ray Parker taught oil painting, and Tony Smith taught in a three-piece suit. After Barry obtained his terminal degree, he was hired as a professor at Hunter by Eugene C. Goossen, an art critic, historian, and curator who was the department chair. Barry taught there from 1964 to 1979, a job he admitted made it easy for him to avoid producing art commodities to support his practice. 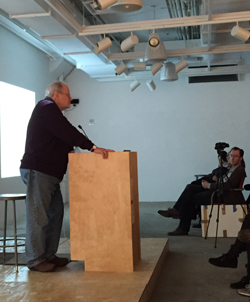 Like many Conceptualists, Barry started out as a painter, and the exhibition’s oldest work is a painting of gridded red and black squares, a student piece from 1962. By the end of the decade, his attitude toward art changed, and he began working with ephemeral, invisible, and nonart materials, such as typewritten statements like “All the things I know but of which I am not at the moment thinking—1:36 p.m.; June 15, 1969.” He also experimented with electromagnetic waves, with pieces that triggered metaphysical thoughts from scientific concepts. “The most powerful things in the world were invisible,” Barry said regarding Electromagnetic Energy Field (1968), which is “a battery-powered transmitter encased in a nondescript metal box [that] sends out waves of energy, filling the gallery space with an invisible, immeasurable, but nonetheless real force.”2 With a sound “kind of like a whistle,” Electromagnetic Energy Field was as large as its audible range. Carrier Wave (1968–69), Barry said, blots out all other signals in the area. The artist’s father, who was an electrical engineer (and a disk jockey in the 1940s, using his own equipment), made the radio-wave boxes for his son’s art projects.3 At the time, the artist revealed, a telekinetic institute operated near the 57th Street galleries in Manhattan where he first showed these pieces, so he knew he was in the right area.

“I used to call galleries ‘cemeteries,’” Barry said confidently, and several classic works examined art-world mechanics. When dealers contacted him for shows, he told them, “Well, right now I’m closing galleries.” His Closed Gallery (1969) was first done at Eugenia Butler’s space in Los Angeles, and also in Amsterdam and Turin. “Lock the door,” he joked. “Don’t let anybody in.” The public was notified of the negated exhibitions by postcard. 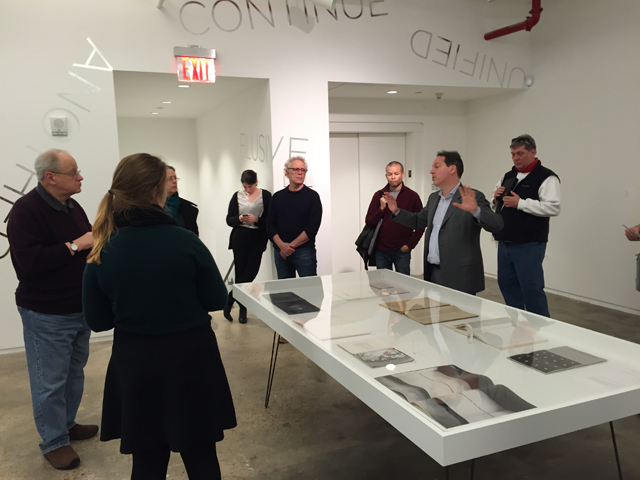 Before the lecture, the Hunter professor Joachim Pissarro discussed Robert Barry’s exhibition in the galleries; Robert Barry is on the far left (photograph by Christopher Howard)

Conceptual artists notoriously pillaged spheres of knowledge outside the domain of fine art. Barry noticed the beautiful Greek names of the noble gases, which are elements on the periodic table that rarely interact with other elements or change chemically. For one his best-known works, Inert Gas Series: Helium, Neon, Argon, Krypton, Xenon, from a Measured Volume to Indefinite Expansion (1969), Barry purchased glass containers of these gases from a distributor that worked with schools and, with his dealer Seth Siegelaub, drove a rented Mercedes convertible into the Mohave Desert, where he laid the containers on newspaper and smashed them with a hammer. He smashed more bottles of gas at a Beverly Hills hotel. Siegelaub wanted to document things—these works are typically shown as typeset text and black-and-white photographs in frames—but Barry did not. Nearly fifty years later, the many cubic feet of neon, xenon, and other gases that he released are still floating in the Earth’s atmosphere, somewhere.

“Barry does not work with words; he communicates conditions.” So wrote the critic and curator Lucy R. Lippard. One of these conditions, based on trust and agreement, is evident a class assignment for students that Barry sent to David Askevold at the Nova Scotia College of Art and Design in 1969:

The students will gather together in a group and decide on a single common idea. The idea can be of any nature, simple or complex. This idea will be known only to the members of the group. You or I will not know it. The piece will remain in existence as long as the idea remains in the confines of the group. If just one student unknown to anyone else at any time, informs someone outside the group the piece will cease to exist. It may exist for a few seconds or it may go on indefinitely, depending on the human nature of the participating students. We may never know when or if the piece comes to an end.

It’s true—nobody is sure if the secret was revealed immediately, as one account goes, or forgotten, as goes another. In a way, misinformation is part of the piece. “I’m not even sure this is a piece,” Barry conceded. “It’s about the fragility of ideas…. It’s life. That’s what life is about.” Two older works received attention during tonight’s lecture: Robert Barry Presents Three Shows and a Review by Lucy R. Lippard (1971) and Marcus Piece (1970). For the former, Lippard wrote a short essay about Barry’s work that, with a collection of index cards that described other pieces she included in other exhibitions, formed a show at Yvon Lambert Gallery in Paris. Another text-based piece quoted the philosopher Herbert Marcuse: “A place to which we can come and for a while ‘be free to think about what we are going to do.’” Barry’s strategy was “to plagiarize his idea and make art from it.” 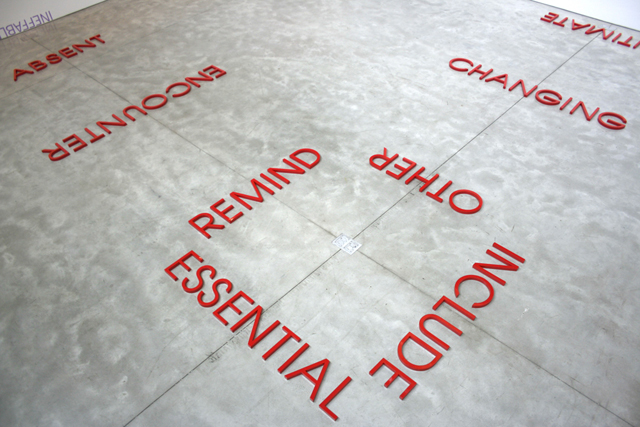 Barry’s work since the 1970s has been more oblique: collections of words that are read out loud, drawn or stickered directly on walls, appear in paintings, are cast in acrylic, or projected onto the floor. The words he chooses typically express states of being and abstract actions—and he rarely employs nouns. In the Hunter College exhibition, Barry placed transparent vinyl letters on the windows facing Canal Street. His videos are likewise impressionistic, such as one he filmed on a train and in the Centre Pompidou–Metz in France. It’s easy to understand how critics and historians tend to focus on Barry’s early work, because his production from the last thirty years requires viewers to engage more, to be active participants in shaping meaning.

If I were conducting an interview with Barry, I would ask him about these more recent works, skipping over the 1960s stuff that many people know.4 But that is not what Max Weintraub, an adjunct professor at Hunter and the exhibition’s cocurator, did when he joined the artist onstage for a lackluster dialogue. Weintraub asked about topics already covered in Barry’s lecture, such as the mechanics of the art world, so maybe he hadn’t been paying attention. The professor asked an asinine question about blurred authorship of Three Shows and a Review: “Did it occur to you that [Lippard] was doing a Robert Barry?” “No,” the artist responded. Barry and Lippard had conversations, and her writing contribution was perfect. Weintraub did get Barry to talk more about the Closed Gallery pieces, including the one in Los Angeles that employed two old ladies from a telephone answering service in a little office on Sunset Boulevard. 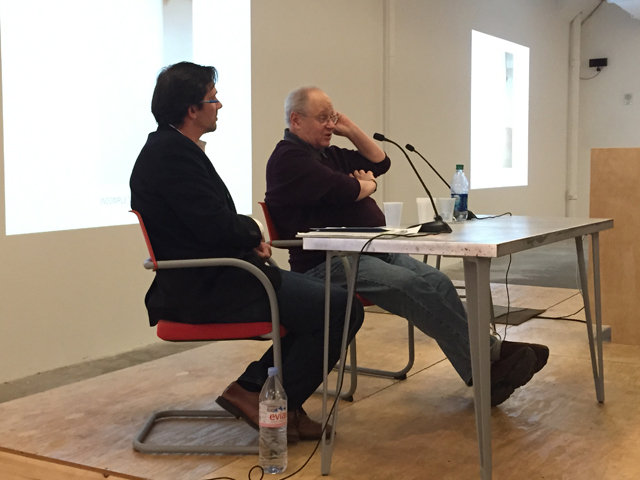 An audience member asked about the difference between a serious work of Conceptual art and a joke—a great question but one left answered. Barry said he needed specific works to compare because he doesn’t like generalities. (The questioner did not give examples.) “‘Conceptual’ is a bad word,” another attendee commented. “Is there one you prefer?” “No,” Barry responded. There’s always something physical about art, he said, though using the term is a convenience and valuable because “you get into shows.” It is rare that an artist cites the benefits of labels and categories. Conceptual art is tangible in other ways. Barry urged artists in the audience that “you should get something for your labor” and “you can’t give it away.” He got over that attitude. His work is valuable.

1 According to a 2010 Archives of American Art interview with Robert Barry, what is now Lehman College in the Bronx was part of Hunter College.

3 Barry explained: “My dad gave me a hand, making up these little transmitters that sent out a signal. If you put one in the gallery, and also had a portable radio turned to that frequency, it gave off a whistle. I don’t think my dad had any idea how this connected to art or my drawing, but he had fun doing it.” Barry, quoted in Benjamin Genocchio, “A Career Built on Exploring the Boundaries of Art,” New York Times, November 30, 2003.

3 For criticism on his recent work, see my Artforum.com review of Barry’s 2009 exhibition at Yvon Lambert Gallery in New York.