This essay is the first of three that reviews a recent symposium at the Jewish Museum. Read the second and third texts. 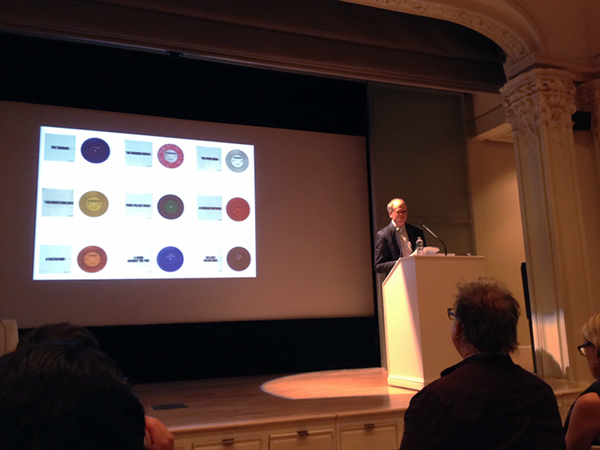 An afternoon symposium that coincided with the Jewish Museum exhibition’s Jack Goldstein x 10,000 began with a keynote presentation by the artist and filmmaker Morgan Fisher, who has a fall exhibition called Interior Color Beauty at Bortolami Gallery in New York. Upon accepting the invitation to speak, Fisher stated that he purposely didn’t read the literature on the artist that he hadn’t already, in order not to be an “imposter” among the critics and historians. Thus he spoke of what he knew, having met Jack Goldstein (1945–2003) in the 1970s through James Welling. Goldstein screened his films for Fisher, who felt they had “conviction.” Goldstein’s records, Fisher claimed, are more complex than the films; he should have had the same conviction back then as he does now.

Each of the nine 45 rpm, seven-inch records from 1976, on view both visually and aurally in the exhibition, has a white cover with black capital letters spelling out the title of the work; they all contain sounds from a music library or other sound-effects source. The vinyl records themselves are colored; some are transparent, others are opaque. Fisher professed that Goldstein thought of the color first, then the images—though I presume that Goldstein first matched the colors to the sounds. Since record-pressing plants have a finite list of predetermined colors from which to choose, I wonder how many options the artist actually had—especially since colored vinyl wasn’t especially popular until the 1990s. Record historians, speak up!

The records, Fisher continued, are neither “films in another form” nor “soundtrack album[s].” While playing them, he said, a listener conjures mental images in relationship to the records. To Fisher’s wife, the barking dog from A German Shepherd sounds excited but friendly, but to him the red vinyl onto which the sound is pressed signals danger. Fisher identified with the cat with the weaker meow in Two Cats Wrestling, the audio of which, he discerned, is a collage of two separate tracks—the tussling felines never faced each other in real life. The sides of the disc run out before the match is finished and thus it never finds a resolution. Fisher proposed an interesting theory for the records: they possess a “comical falsity,” a fake discrepancy or contradiction between a work’s sound and its title, which correspond but are never congruous. The yellow color of this record, incidentally, reminded Fisher of lions and marmalade. 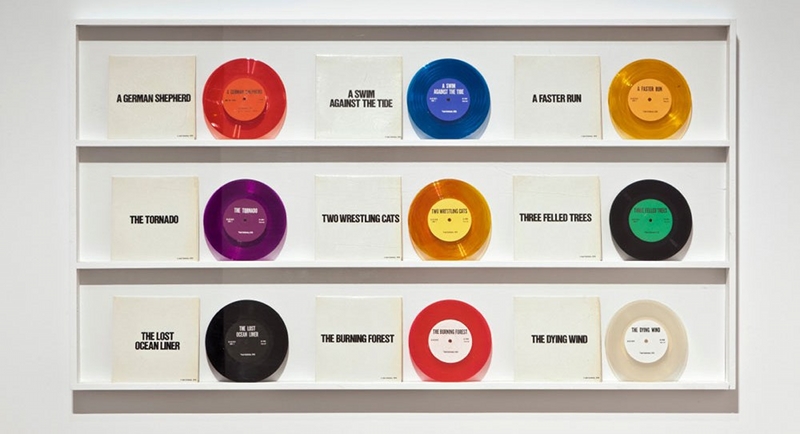 Purple was the tint of stock film footage of tornadoes Goldstein had seen, Fisher said, so The Tornado has a patriarchal hue. Goldstein wanted the listener to have control over his or her environment, Fisher continued, by turning the lights and/or the stereo volume up or down. Yet a person has no control when experiencing an actual tornado—it’s a sublime encounter—so the record is a representation of that experience. To control a tornado, Fisher said, is an impossible wish. But does this purple 45 contain the sounds of an actual tornado, he wondered, or did it come from, for example, a theatrical wind machine? Chalk up another discrepancy.

The audio tracks on A Faster Run loops three times, Fisher estimated, observing that one thing is faster than the other. But what is at stake? Who wins? He does not know, and the orange vinyl offered nothing to help him with interpretation. Since we hear the sounds of galloping and occasional human shouts on this record, I found it odd that Fisher didn’t mention that horses were racing, not people or cars. That makes me think of gambling more than it does cowboys.

A Swim against the Tide contains sounds of splashing water, so Fisher pictured a human swimmer. Because the volume remains consistent, he determined that either swimmer made no progress in the water or the microphone kept pace with him or her. Consequently the record connoted exhaustion and death, though it’s not possible, he said, to determine if there was any danger. Like Two Cats Wrestling, the record ends before the swimming does, leaving a listener suspended—or perhaps treading water. And like The Tornado, it’s impossible to know if the sound was recorded in an ocean or lake or in a bathtub. “The fake creates a discrepancy,” Fisher explained, “that creates the highest interest.”

Three Felled Trees is about change and resistance, Fisher said, specifically between a tree and a woodsman. With audio of steady chopping and a bushy fall, the work is a scene of conflict involving passive and active actors. The Dying Wind runs from blustery when the needle drops toward a less-than-dramatic silence. Considering The Burning Forest, Fisher recalled a passage in Joseph Goebbels’s diaries in which the Nazi leader described an almost erotic pleasure over the sounds of air raids. Finally, Fisher felt pathos for the foghorn-blowing ship in The Ocean Liner but not for the passengers that might be on it.

Fisher discussed another Goldstein seven-inch, The Six Minute Drown, that was made in place of a film (and not part of the suite of nine). The flat, unmodulated sounds convey a sense of helplessness and uncertainty. Where is this? Who is there? Was the drowning a deliberate act? Fisher was not sure if the utterance at the end of the record is a death, since there is no sign of the drowning person getting tired. He pondered the idea of someone wanting to die but not succeeding. The listener, Fisher concluded, is subjected to the agony of another. How perverse!

From the audience, the art historian Claire Bishop thanked Fisher for his close, personal reading of the works that created, in her words, “minimovies.” Indeed, his interpretations were outstanding and remained true to the work—I would love to read his essay in published form in a journal or website. But Bishop surprisingly began expressing her dissatisfaction with the talk, attempting to articulate an opinion, in a marble-mouthed way, that I glibly paraphrase as this: “Well, that’s what you think, but who are you to tell us what the records are about? What if they mean something else?” Fisher meekly responded, “I’m not doing this to the records; the records are doing this to me.” He then apologized—and did so again during the next panel—for his presentation. I was baffled. Is the need for “criticality” so great that someone like Bishop cannot accept an outstanding art talk that was lucid, insightful, and pleasant to hear without feeling the urge to find fault in it?