The Ergonomics of Experiencing a Text 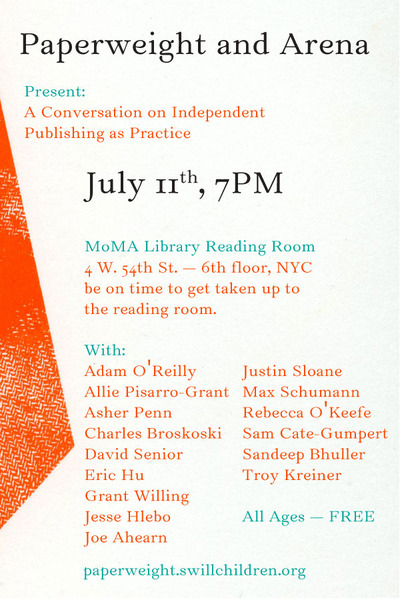 The flyer for “A Conversation on Independent Publishing as Practice”

Paperweight, a new organization founded by the artist Jesse Hlebo, was born because, it seems, people involved in producing artist’s books and related cultural publications feel that something needs to be done but aren’t sure exactly what. This evening’s conversation, involving more than a dozen participants seated at a long single table in the Museum of Modern Art Research Library’s reading room, was held to help pinpoint those purposes. Hlebo steered the discussion, with help from David Senior, a bibliographer for the library, and Max Schumann, associate director of Printed Matter. Hlebo, who also runs a multimedia publishing house and record label, Swill Children, and a journal, Underscore Quarterly, envisions Paperweight, an online venture, with contemporary and historical aims: to facilitate the work of the current generation while recognizing past accomplishments. It also recommends printers and provides links to publishing resources. Paperweight is a channel on Arena, a web-based content-management system that serves as a place for collaborative research, social networking, and blogging, posting, and tagging. It also allows exporting information, such as to a PDF, for printing. Judging from the brief discussion of the site, Arena seems to indicate a shift of users from the Walmarts of social networks, Facebook, toward microcommunities with specific interests or common goals. 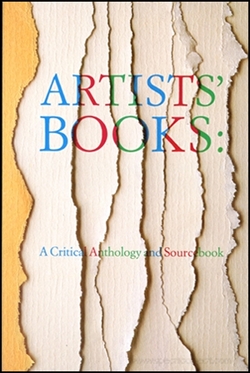 Hlebo has noticed an uptick in the production and acquisition of artist’s pamphlets and books but laments the lack of critical reviews of them. I can’t help but wonder if his perception isn’t one that is decades old, as described in Joan Lyons’s Artists’ Books: A Critical Anthology and Sourcebook, from 1985, or in Johanna Drucker’s The Century of Artists’ Books, first published in 1995 (both from Granary Books). The so-called renaissance of interest in printed matter is likely a myth, as the area has seen steadily increasing participation by artists as well as innovations and developments in form, from the Xerox machine to desktop publishing to the web, for years. Museums have regularly staged exhibitions on the subject. It’s tempting to think that the current, less historically grounded generation is itching to reinvent the wheel—but it’s clearly not necessary to do so. If reviews of artist’s books have appeared over the past year, or over the past ten years, no panelist acknowledged or defended their existence. Perhaps an editor at the Journal of Artists’ Books, based in Chicago, or at the Blue Notebook, headquartered in Bristol, might have an answer. Or the former publishers of the defunct New York magazine Art on Paper or the current editors of caa.reviews. If this is indeed the case, that no one reviews these kinds of publications, it seems odd that artists themselves haven’t begun to write about each other’s work. It’s equally surprising to learn, despite the proliferation of print and online publications devoted to art more generally, that more folks haven’t taken up the challenge. If Paperweight can publish original criticism while serving as a chronicle of reviews written elsewhere, something significant would be accomplished.

The evening’s conversation largely revolved around three topics: (1) the characteristics of physical and virtual media and the assumed reading experiences they produce; (2) the economics of publishing; and (3) the idea of community. The discussion was disappointing at best and tedious at worst, especially as participants spoke of differences between print and web reading, which sent me through a time warp back to 1998. Baffling as it seems, people were discussing the internet as if it were brand new.

With roundabout, largely unproductive statements full of clichés, speakers upheld the stereotype that handheld books are intimate and better hold readers’ attention, whereas online reading is distracted and loose. This thread essentially revealed personal prejudices, with nothing substantial or proven about reading habits apart from the participants’ assumptions or preferences. No one discussed the possibility of matching message to medium, that is, an artist choosing a format—whether physical or digital—that is right for the book, or selecting the wrong format for the project, to complicate the situation. Truth be told, it wasn’t even clear why the conversation focused on the topic at all. 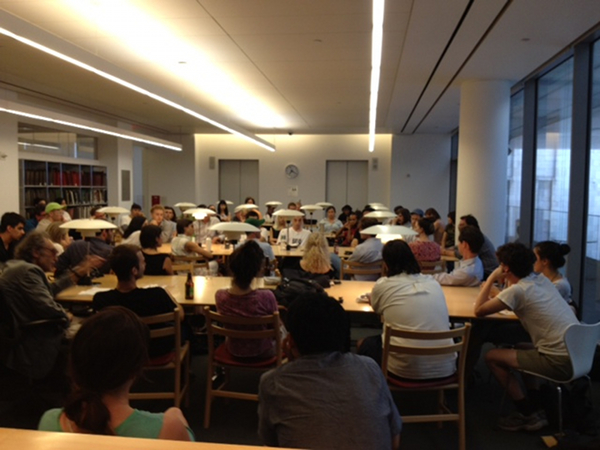 Thankfully Joe Ahearn, managing director of Showpaper, brought up a relevant, enlightening comparison between live music and recorded music that put things in perspective. It’s dubious, he remarked, to think that a concert performance is more intimate—the default position many would assume a listener or musician to take—when the musician might find the studio to offer a more cherished, focused experience. Likewise, I would add, hearing the same song in a nightclub, a car, or a bedroom, or on headphones, might produce different feelings and levels of attraction and attention for a listener.

The contradictions of obsessing over medium was emphasized further, as someone pointed out, during the process of producing a book: writing in Word, laying out pages in InDesign, and uploading a final document to an FTP site can be entirely immaterial, with the physical creation coming only from the printer at the end of the process. Similarly, I wonder what a discussion about the relationship between the handmade book and a hand-coded website, as opposed to template-based production for both, might yield.

Looking at overhead, the main differences between print and online publications are paper and mailing costs—a digital project largely avoids them. The use of computers and the internet, though, do not reduce the intellectual labor of time, resources, design, imaging, and so on. If someone chooses to publish physically, he or she can choose from a range of expensive papers and bindings or elect to sneak copies from a Xerox machine at work—the possibilities are infinite. Most speakers agreed that making money is not a priority, which means that they work for free, or for some other reward. This was not unexpected, as art making is often subsidized through day jobs, teaching positions, and the like.

The artist and writer Asher Penn noted how the artist’s book, as it developed in the mid-twentieth century, resisted the tyranny of the expensively produced livres d’artistes. Schumann also emphasized the democratic, everyday, and independent transmission of historical artist’s books. Another participant bemoaned the sheer volume of production today, so much so that little gets sold. Judging from the size of the 2011 New York Art Book Fair, it’s possible that the supply side indeed overwhelms the demand.

The conversation suffered at times because participants declined to identify and discuss specific artists, publishers, and companies that are doing good work or who might serve as models. (Ahearn was eager to bring up his work with Showpaper and even brought copies of the biweekly broadsheet in his backpack). Innovations in ebooks, commercial or artistic, went undiscussed. Hlebo should have invited a representative from Badlands Unlimited, which for several years has produced physical and electronic books, with the same publication taking different forms and having novel features. Hleblo should also have requested the presence of Gabriel Fowler from Desert Island, an old friend of mine whose quick observations and insightful, occasionally abrupt comments might have kept the conversation from wandering, or David Platzker of Specific Object, who deals art ephemera and memorabilia in addition to artist’s books and rare catalogues. Fowler publishes Smoke Signal, a free tabloid of alternative, independent, and underground comics, and Platzker organizes exhibitions with his materials. 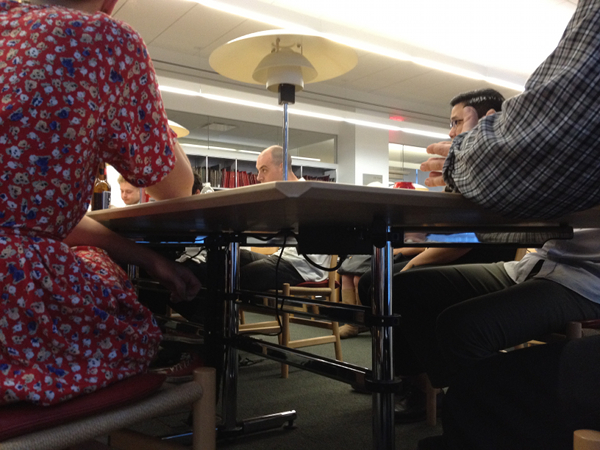 The conversation, as seen by In Terms Of (photograph by Christopher Howard)

A buyer and seller of books—I believe it was Rebecca O’Keefe, who has worked at Ed. Varie and Printed Matter—spoke up a few times, once explaining that the internet not only helpfully allows her to peruse and preview examples for acquisition, but that she also meets people and makes friends through this online work. Hlebo cited the New York Art Book Fair, held annually at MoMA PS1 in the fall, as a place where the “community can see itself.” Ahearn also stated the importance of community, claiming that Showpaper isn’t intended solely as a twice-a-month listings publication, though a chronicle of upcoming band shows at independently run all-ages spaces is clearly its primary purpose. While Showpaper may connect folks in the New York music scene, the publication isn’t singular in that regard. The website Oh My Rockness, which lists a broader range of concerts, and Brooklyn Vegan, a blog that previews and reports on them, also promote community in a similar way. (The notoriously acerbic comment section of the latter, though, certainly repels civility.)

Community can be a funny thing. My companion for the evening, a journalist with no ties to the art world, mentioned to me afterward how everyone was so unusually nice to each other for the entire hour and a half we were listening. Not that the panelists should yell at each other, or raise a fist, but she was right. No one had taken offense to—or even opposed—what the others said. A lack of arguments or disagreements was curiously strange. Either everyone was on the same page or they were too timid to speak their minds, perhaps for fear of disrupting the community. The art historian Isabelle Graw addresses cooperation and networking in the art world in her 2009 book, High Price: Art between the Market and Celebrity Culture. Regarding criticism in particular, she writes: “few are prepared to write a well-founded negative review, as I know from my work as an editor. People are unwilling to make unnecessary enemies, especially as their support might one day be needed. Today’s rival could be tomorrow’s crucial cooperative partner. For this reason, hardly anyone today fights out in the open.” Graw also notes how artists no longer publicly antagonize others and devise factions, “a form of behavior that was part of the standard repertoire of every avant-garde from Dada to Situationism.” Doing so today would certainly be considered self-sabotage.

In spite of the community cheerleading, provincialism reared its irritable head, as several speakers dismissed comics and graphic novels from their sacred category of artist’s books—seemingly unaware of the struggles of decades past, when makers of reproducible material, whether prints, photographs, multiples, or books, sought to establish themselves as creating valid aesthetic expression on par with painting and sculpture. In a rare moment of disagreement, Penn pointed a finger at Printed Matter for its decision, in the 1990s, to exclude zines from its offerings. Schumann stated that the organization felt publications with writing and images coming from the music world were categorically different from artist’s books and other kinds of relatively inexpensive multiples. It was amusing to realize that once the door opened to makers of artist’s books, they were quick to shut it tight behind them. In a multidisciplinary world with overlapping scenes and interests—Raymond Pettibon and SST Records in the 1980s being the first example that comes to mind—these exclusionary schemes are unnecessary. Of course, it’s perfectly understandable that curatorial management and editorial decisions must be made. Let’s see how Paperweight handles it.

Soundcloud hosts streaming and downloadable audio of “A Conversation on Independent Publishing as Practice.”