Much Detachment, Very Labor, So Painting

The Economy of Painting: Notes on the Vitality of a Success-Medium and the Value of Liveliness
Thursday, June 4, 2015
Jewish Museum, Scheuer Auditorium, New York 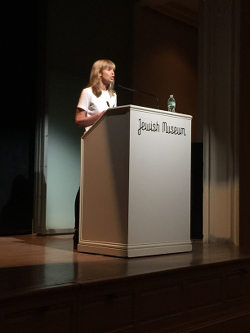 A well-attended lecture by Isabelle Graw, a professor of art theory and a founding editor of the journal Texte zur Kunst, was titled “The Economy of Painting: Notes on the Vitality of a Success-Medium and the Value of Liveliness.” Jetlagged from a flight from Germany, Graw framed her talk as an eight-step analysis of the naturalization of painting in the contemporary moment. In the late 1990s, she said, painters “felt pressured to justify themselves,” but this anxiety fell away by the early 2000s, because of social, economic, and historical reasons. Probably most important is that artists since then have absorbed the critique of painting and consequently renewed the primacy of the medium.

Graw’s term for the renewal of painting is “vitalist projection.” Her point of departure was Hubert Damisch’s ideas about the indexical signs traditionally associated with painting, such as the brushstroke, which imply subjectivity. Brushstrokes suggest “the traces of an activity to the eyes,” Graw explained, and act as a finger pointing to the absent or ghostlike author. That a painting isn’t actually alive but, because it exists in a material form, offers an illusion that it can think and speak—this is vitalist projection. The labor and lifetime of the artist are seemingly stored in the painting, she told us, but they are not reduced to it. And what a painting actually depicts, Graw argued, is irrelevant to this concept. 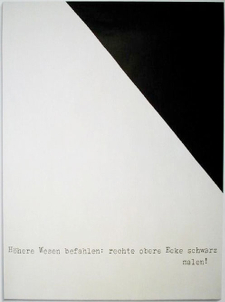 One would expect Graw to provide examples from Western painting, from the Renaissance to modern times, to give us an idea of the kind of work that projects vitality. Instead she jumped to the late 1960s, when the German artist Sigmar Polke ironically staged subjectivity as a display of affect. Paintings such as Polke as Astronaut (1968) and The Higher Powers Command: Paint the Upper Right Hand Corner Black! (1969), Graw said, invoke the presence of the author but mock it. And based on its title, the latter work even suggests it painted itself.

Graw stated that she spent a year scratching her head over the question “What is painting?”1 For her, painting is not just a picture on canvas but also an art that transgresses boundaries. Painting is revitalized, she said, when it pushes boundaries, like when the French artist Francis Picabia tacked a stuffed monkey to cardboard and painted words around it to create Natures Mortes (1920). Incorporating spheres of labor, consumer goods, and written text into the work, Graw said, breathed new life into painting. Similarly, Polke’s The Large Cloth of Abuse (1968), a painting inscribed with German curses and insults, combined fashion, art, and design—the artist wore the canvas as a gown before hanging it on the wall. The Large Cloth thus becomes a discursive object that appears to be alive—it can speak to us. But apart from the abusive language, what does it say? Probably not much. As Raphael Rubenstein wrote in his review of the artist’s retrospective at the Museum of Modern Art, “It would be hard to find an artist in recent times who was less forthcoming than Sigmar Polke (1941–2010). He almost never gave interviews, and on the rare occasions when he did so, his responses either mocked or otherwise frustrated the interviewer’s quest for information.”2 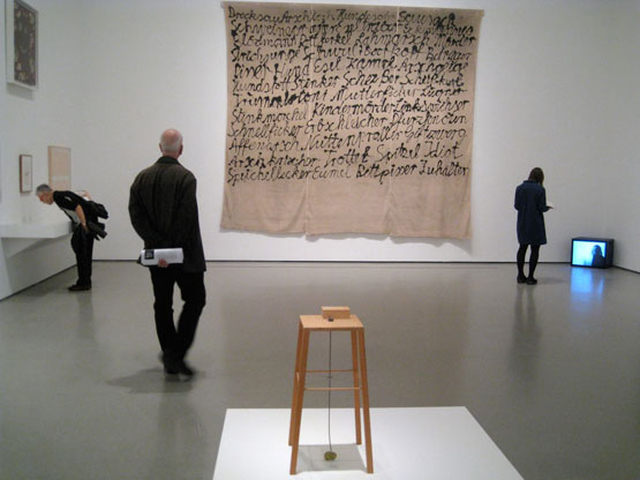 Graw cited other historical artists who revitalized painting (El Lissitzky, Yves Klein, Niele Toroni) and added a few newer ones (Jeff Wall, Wolfgang Tillmans, Rachel Harrison) whose work addresses ideas about painting but usually does not incorporate any kind of paint. “It seems tempting to have a highly elastic definition of painting,” Graw said, “to detect it everywhere,” but she didn’t commit to going that far. Nevertheless, the medium can “push beyond the edge of the frame,” she said, “while still holding onto the specificity of the picture on canvas or to variations of this format.” I nodded my head to all of this—elastic definitions of art are good—but still had one major question: When exactly did painting exhaust itself? Why did the medium need to be renewed in the first place? How did painting become moribund? Graw failed to establish the norms against which her exceptions rebel. If academic approaches or religious iconography were to blame, I wanted to know how vitalist projection worked in them, or not.

Graw discussed the narrow bond between person and product, in which the artist and his or her creation overlap. In performance art, she said, this congruity is achieved through the persona, a staged version of the artist. In the work of Andrea Fraser, who was Graw’s example, the character invoked by the artist can be separated from the artist herself. The identity of a painting and its creator diverge: the painting “cannot be reduced to its maker because it’s material,” Graw said, making the relationship metonymic. If I can discern a difference between painting and performance, according to Graw, it’s that a performed character is immaterial, brought to life by a person, whereas a painting is a physical object that has a separate physical presence. But since painting appears to be lifelike but really isn’t, what is she even going after? I began to suspect that Graw was proposing a theory of painting based on the lack of an idea. What a strange thing to do.

Graw reviewed painting’s specific indexicality to the ghostlike author (which doesn’t exist, right?), starting with Charles Pierce’s notion that a sign must have a physical connection to an object, corresponding point by point. Pierce cited photography, which has a factual connection to the world and, in Graw’s words, “gives an automatic inscription of the object without presupposing an author.” Do people still take this nostalgic if not ancient view of photography—this it is mechanical, neutral, objective, and descriptive—seriously? 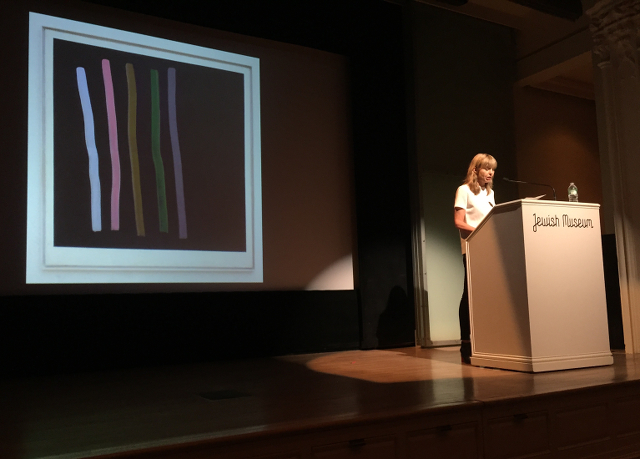 Isabelle Graw at the Jewish Museum (photograph by Christopher Howard)

Graw decreed that an artist doesn’t have to touch a painting for it to have subjectlike power—a power that she  repeatedly nullified as being an illusion. Like the work of Andy Warhol and Wade Guyton, a painting could be made mechanically or by an assistant. Through this, she said, imperfections can become improvements, which I took to mean a revitalization. At this moment Graw acknowledged the primacy of painting over other forms of art, such as sculpture, to express subjectivity, but her argumentation was neither clear nor convincing. She pointed to Georg Wilhelm Friedrich Hegel’s preference of painting over sculpture in his writing on aesthetics, to the power given to painting historically, and to painting’s familiarity to us. Her defense (because other people said so) was on shaky ground.

The American artist Frank Stella once said that painting is handwriting, Graw went on, and some have understood Stella’s work as undermining the signature style—despite him creating his own. The more artists erase themselves from their work, Graw said, the more their subjectivity appears in it. “So there’s no way to get rid of it, right?” she joked. Here Graw recognized that an artist uses a mechanical process—like when the German artist Gerhard Richter drags paint across a canvas with a squeegee—doesn’t signify detachment. Why can’t she apply the same logic to photographers? 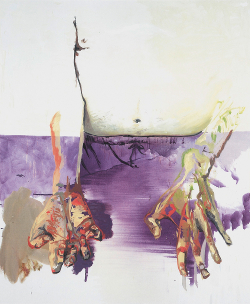 A painting’s value is not its price, Graw said, but rather is “a symbolic and economic worth that is attested to it once it circulates as a commodity.” (She explored this idea in her enlightening 2010 book High Price: Art between the Market and Celebrity Culture.) Valuable art, she continued, must be attributed to an author—this in spite of millions of art objects in museums worldwide (including paintings) whose makers have not yet been identified, or never will be. As in steps one and two of her talk, Graw cited only a contemporary example: Martin Kippenberger’s series of Hand-Painted Pictures (1992), which satirized the desire to see the artist’s personal touch in painting. (Kippenberger often had assistants or hired guns make his work—sometimes too well, to the artist’s displeasure.) Graw explained that this desire becomes a fantasy in collecting: when buying an artwork, a collector also buys into a fantasy that he or she has now become part of the artist’s life. This idea was the most compelling in her talk, and I would like to see Graw develop it.

The Q&A session was scattered, with conversation between Graw and several audience members revolving, in an uninteresting way, around the production of digital images, and around Karl Marx’s definition of value and labor. Graw summarized her argument again: liveliness is apparent in painting from the Renaissance to the nineteenth century—though she never established when, how, and by whom—and twentieth-century avant-gardes redefined that vitality as they integrated art and life, something we usually understand as emancipatory. Yet the new spirit of twenty-first-century capitalism, she began to conclude, has a similar strategy: control subjectivity by transforming life into a currency, if not a product to be bought and sold. Taking an autonomous, conversative view of the function of art, Graw said that painting today fulfills the connection between art and life. In fact, she said, it’s one of the last places for people to find fulfillment. I am reminded of that quote attributed to Henri Matisse: painting should be “a soothing, calming influence on the mind, something like a good armchair which provides relaxation from physical fatigue.”

1 Her exact queries were: What do I mean when I say painting” and “What is my notion of painting?”