Needle on the Record 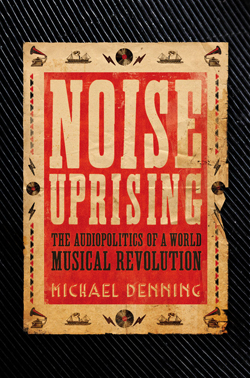 “You might say that a people or a movement must be constituted musically before it can be constituted politically.” This was one argument among many declared by Michael Denning, a professor of American studies and English at Yale University, during a talk for his new Verso book, Noise Uprising: The Audiopolitics of a World Musical Revolution. Denning, however, made it clear that the music culture during the brief period of time studied in his book—from the widespread use of electrical recording in 1925 to the early years of the Great Depression—was not revolutionary politically.

Denning’s words were well suited for the summer exhibition at Interference Archive, if a song could be freedom … Organized Sounds of Resistance, which explored intersections of music and politics through record covers, song books, and music memorabilia, all with a predilection for insurgency. Most prominent were three walls of record covers, some from popular music, such as Rage Against the Machine’s Evil Empire, Meat Is Murder by the Smiths, and Bikini Kill’s self-titled EP. Revolutionary-minded jazz players Sun Ra and Rahsaan Roland Kirk were represented, as were obscure proletariat titles like They’ll Never Keep Us Down: Women’s Coal Mining Songs.

Drawing from the first chapter of his book, Denning provided ten instances of early electrical sound recordings from around the world. Before this technology, singers and musician performed live in front of a machine that cut grooves into a platter—the master recording of the session was a record. In the mid-1920s, engineers developed a more advanced method using microphones and amplifiers to electrically inscribe sounds onto a cylinder, disc, or film, which could be taken elsewhere for manufacturing. A son band was recorded in Havana in October 1925, followed by Louis Armstrong’s bands in New Orleans and Chicago a month later. In Cairo the legendary vocalist Umm Kulthūm recorded songs for a set of ten 78 RPM records in May 1926, and the Jakarta singer and dancer Miss Riboet laid down the kroncong classic “Krongtjong Moeritskoe” in November. Other recordings were made in Honolulu, Zanzibar, Accra, and Johannesburg—and Django Reinhardt in Paris. Denning played twenty to thirty seconds of each example to give the audience a taste of the explosion of music from back them. He also created a Spotify playlist for the book.1 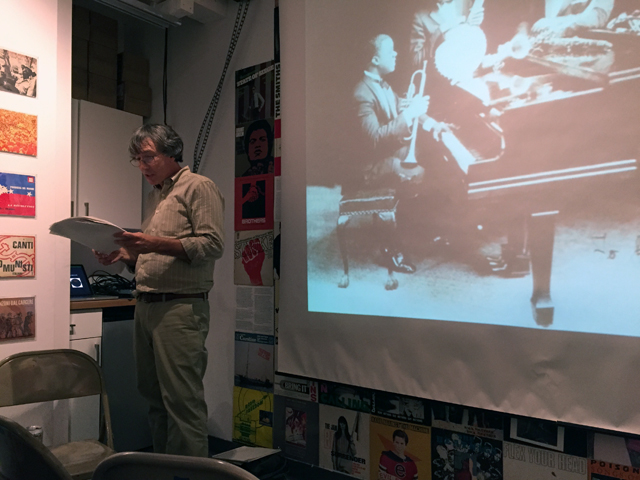 Denning could not overstress the importance of colonial port cities, connected by steamships. After the invention of electrical recording, companies such as Gramophone in the United Kingdom, Victor in the United States, and Pathé in France, sent engineers around the world, usually twice a year, to port cities—Manila, Honolulu, Buenos Aires, Cape Town, Tunis, Bombay—to record the locals in order to sell products back to the local markets. It was a commercial enterprise relatively unconcerned with preservation. One British music reviewer, Denning said, noted that even though England produced the physical records, they were imported quickly and therefore hard to find. In the United States, homegrown music was marketed as “race records” and “hillbilly” music, often become trendy in the metropolitan cities. Though the recordings of the electrical era came from all over the world, they were mislabeled as jazz, a catchall term for syncopated music that might actually be tango, rumba, or rebetika.

In those port cities lived professional musicians who could read music, as well as those learned by ear. “You see it in Havana, you see it in New Orleans, you see it in Shanghai,” Denning said. “The mix of these two sets of musicians” produced localized—I hesitate to say indigenous—music outside the formal, orchestrated scenes in London, New York, and Berlin. Creating makeshift studios in hotel rooms, engineers would sometimes put up a sign that essentially said “We are recording and need musicians.” Other times they would locate performers on the edge of musical culture—those musicians who were trained but were part of the community—who would become musical directors that recruited from the local scene and even registered (or assigned) a recording’s copyright. In colonialism, he remarked, a class of subordinate elites served as intermediaries between the ruling class and the general population, and musicians could be found there. These musicians, Denning revealed, are the “key protagonists or heroes” of Noise Uprising. 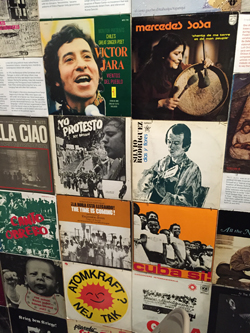 While some might see exploitative capitalism at play here, Denning took a deeper look. “These musics are best understood not as an emergence of the music industry,” he said, “nor was it simple popular music.” Instead, “it was a vernacular revolution,” not unlike the effect of the invention of the printing press on language. The author called the emergence of these records a “decolonization of the ear,” sparking a political unconscious in music that later would become conscious. The young intellectuals in port cities, he said, were drawn to their local music. Denning stated, “Political decolonization—the decolonization of territories, of legislatures—depended on a cultural revolution.” The creation and circulation of records from the late 1920s onward supported enfranchisement, he claimed, serving a role that books and newspapers once did. Denning commented that the record covers on the wall of Interference Archive, such as those by the politicized Nigerian bandleader and politician Fela Kuti, exemplify the evolution.

In Trinidad, a song by the calypsonian Raymond Quevedo, better known as Atilla the Hun, called “Commission’s Report” responded earnestly to the official government report on the Butler riots. After the British cracked down on dissent, he recorded two more songs that were sympathetic to the replaced colonial leaders, and a third, called “The Strike,” that cheekily avoided direct commentary. The knowing wink became powerfully prevalent. “Often the most innocuous songs,” Denning said, “carry anticolonial and nationalist connotations in the eyes of the authorities and in the population.” In Hawaii, “the romantic lyric tribute to the land, built on the simple musicality of place names,” was a form a resistance. “What some understood as tourist picturesque actually signified colonial dispossession.”

But what about the commercial exploitation and appropriation of the music? Many of the recordings were a mingling of Western and non-Western instruments, a hybrid evolution of styles that differed from music from isolated, rural locations, which relied on the oral tradition. Even though the folklorists find commercialism suspicious, Denning said, leading figures such as Alan Lomax came to realize the cultural and historical significance of the recordings. In a letter to the Library of Congress, Lomax claimed that the commercial companies did more of a service than the folklorists, who sometimes repackaged the old commercial recordings as indigenously authentic. Denning noted that much of Harry Smith’s celebrated collection , Anthology of American Folk Music, was drawn from early electrical records produced for the market.

The Hungarian composer Béla Bartók sought pure folk music, Denning said, not the popular music played by gypsies for money. The search for authenticity or purity is short sighted, if not misguided, I think, because it fetishizes tradition and allows no room for development and change. In the early phonographic era, Denning said that the song was considered more important than the performance—improvisation was secondary. This attitude reversed. (Reinhardt, for instance, listened to and learned Armstrong’s improvisations.) In addition, a reliance on Western interpretations of exotic music declined. Before 1925, American listeners got Tin Pan Alley renditions of Hawaiian music. Folks no longer needed W. C. Handy’s written notations of the blues because, ten years later, they had the immediate gratification of listening to Armstrong and Bessie Smith. There may have been better trumpet players in New Orleans twenty or thirty years before Armstrong, Denning said, but we don’t have the recordings to prove it. 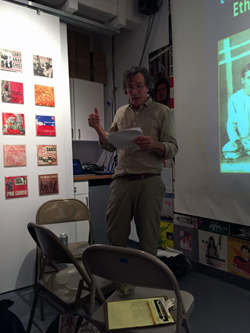 Michael Denning gives the thumbs up (photograph by Christopher Howard)

While some may prize the work of the anonymous collective over the individual or stars, the early electric recordings featured individuals who were stars. Denning argued that the cult of the popular bandleader was not dissimilar to those for charismatic political figures in the decolonization era. The leaders of newly free nations often sponsored the work of musicians to establish not only a national identity but also a national industry. Import substitution is the concept of manufacturing and selling goods within your own country to obviate the need to buy from others. Some musicians were even encouraged to sell their records in New York and London, not just in Lagos.

Denning pointed out the social and sexual contradiction in music. The division of labor was traditional: men are instrumentalists and women are singers. At the same time, he said, women were able to perform in public for the first time. From 1925 to 1930, Denning told us, musicians were not trying to revolutionize music for politics. Records reinvented daily life, making music regular, not occasional. At the time, he continued, music was associated with vice (drinking, drugs, prostitution), with carnival and military marching bands, and with vaudeville and theater. In the port cities, Denning noted, working-class musicians played for working-class people.

Denning compared the early electrical period to the dot com boom of the late 1990s: internet companies had no idea how to make money, but investors poured millions into ideas for websites. In the mid- to late 1920s, record companies recorded anything and everything, because the technology to produce and consume music was so new. Ten to fifteen years later, and after the Great Depression, they knew how to market music and make money. Denny, though, reminded us to focus on the music, not on the industry. The energy of labor precedes capitalism’s capture, Denning said. He urged us to transcend the leftist critique of industry and get to the powerful human impulses to make music—and also to have it heard and shared.

1 During the audience Q&A, an attendee was curious about Denning’s relationship to archives. “In many ways I feel like my archives have been that world of collectors and discographers on the internet,” citing the blogs Excavated Shellac and Haji Maji. Record collectors are the true archivists, he said. Those who collected Robert Johnson records in the 1960s found that, by the 1980s and 1990s, these became too expensive. The collectors turned elsewhere, to the world music that Denning’s book is about.