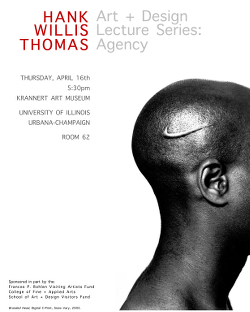 “Would you say your biggest source of inspiration is other people?” an audience member asked Hank Willis Thomas, who had just finished giving a presentation on his work in the basement auditorium of the Krannert Art Museum. The artist replied with a smile: “I’d say.” Indeed, early on Thomas stated that art is about people and connections, and he even began his talk by quizzing the audience, asking who was a student, a faculty member, a first-time visitor. He also asked who in the room had tattoos—there were several students with visibly more than a few—and playfully harassed a few latecomers. Thomas also joshed a reticent audience member halfway through the lecture: “This talk can’t go if you don’t talk.”

If people were the primary inspiration for Thomas’s work, personal biography and American cultural history came a close second and third. He spoke of his mother, Deborah Willis, an accomplished professor, photographer, curator, author, and a specialist in African American photography. “I used to be Deb’s son,” he joked. “Now she’s Hank’s mom.” Thomas said that Willis’s investigation into black photographers, who had been making pictures professionally by the mid-nineteenth century, rewrote his notion of American history, along with the recognition of blacks working in chemistry, physics, and other respected fields. Thomas ran through several images from the twentieth century, from a distinguished photograph of Bert Williams, a Bahamian-born vaudeville star who was “paid to perform blackness” in blackface, to ones of Mike Tyson, Ronald Reagan, and Barack Obama.

Thomas showed a range of his own projects, series, and singular images, comprising mostly photography and sculpture. He played the first couple minutes of a video called A person is more important than anything else… (2014), commissioned by New York Live Arts for a citywide program on James Baldwin. The work features an audio recording of the black author speaking on the artist’s struggle with integrity; Thomas supplied the visuals. After listening intently to Baldwin’s first few sentences, I began focusing on the moving images, unconsciously tuning out the words. When quizzed by Thomas to recall the content of the piece, Eli Craven, an MFA student at the University of Illinois, Urbana-Champaign, said he “got lost in the visual.” I wasn’t alone. 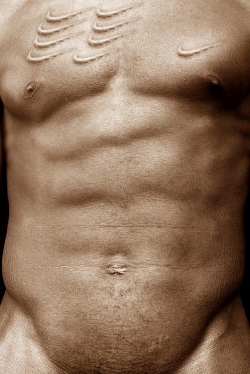 As an artist, Thomas emerged in the mid-2000s with a provocative series of work, called Branded, which showed Nike’s swoosh logo emblazoned not on clothing but seared directly onto athletic black male bodies. The artist understands corporate logos as hieroglyphs: “You don’t have to use the language to understand the ad.” He also connects them to both slave ownership and consumerism. “Bodies are treated differently at different times,” Thomas said.

Thomas’s photographs read quickly, like advertisements. One work in particular, Priceless #1 (2004), parodies the phrasing of MasterCard’s “priceless” campaign but with deadly serious intentions. The photograph depicts the artist’s own family at the funeral of his cousin, who was shot to death outside a Philadelphia nightclub. (Thomas was a witness.) The text read: “3-piece suit: $250; new socks: $2; gold chain: $400; 9mm pistol: $79 (changed here to $80); bullet: $.60.” The punch line of “Picking the perfect casket for your son: priceless” highlights the “affordability guilt” of burials. Do higher price points for caskets, Thomas wanted to know, reflect how much you love a loved one? In 2005 he said, “My aunt is not a rich woman…. I don’t know how much she paid for the casket she picked, but I guarantee you it went on a credit card.’”1 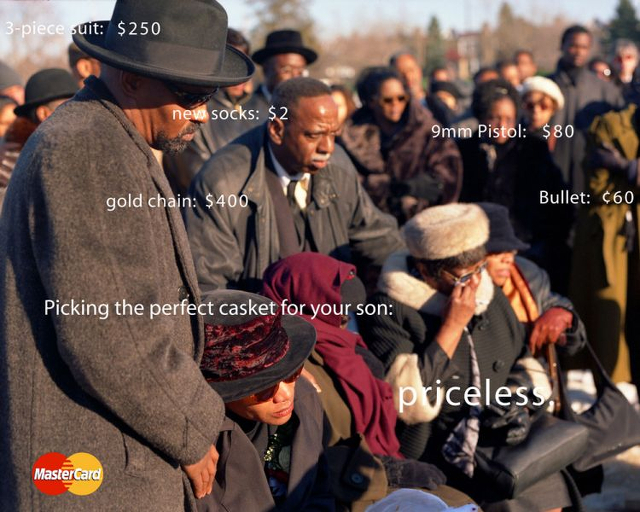 The interest of Priceless #1 goes beyond that. The question always asked of Thomas is “How did you family feel about the image, in mourning?” The artist asked himself that, too, as well as questions such as: Why show it? Do I take the logo off? Is this an exploitative situation? “That’s where the question of integrity comes back,” said Thomas, referring back to the Baldwin speech.

Some viewers find the work offensive to blacks, as one white woman did during the local Fox news story when, in 2007, the photograph was enlarged to billboard size and hung on the exterior wall of the Birmingham Museum of Art in Alabama. The museum faces the jail, so the local crowd read this fact into the image. Though museum curators spoke for him on television, Thomas had to defend the work in the Birmingham newspaper—and then realized how things get dumbed down in public discourse. Was it insensitive to use his grieving family as the subject of his art? “I think I made the right decision,” Thomas said, referencing the same white woman interviewed on television, who understood the artist’s decision to either get revenge or make art.

Thomas then discussed a Reebok advertising campaign from 2005, called “I Am What I Am. Lacking any reference to sports gear, the image for one ad portrays 50 Cent as survivor, rapper, entrepreneur, actor, and criminal—a white man’s idea of black values that in turn reflect black values. You know the image is an ad, Thomas said, because of the logo. The campaign also featured the tennis player Andy Roddick as a white guy who is a champion but feels guilty, the Chinese basketball player Yao Ming with a slew of Asian visual references (rising sun, the year of the monkey), and the actor Lucy Liu as a docile female. “They’re playing off of some crazy stereotypes,” Thomas remarked, adding that the ads have nothing to do with the products Reebok are trying to sell. “We’re doing the work to make the ads work,” he said as he involved the audience once again in a discussion of the images. 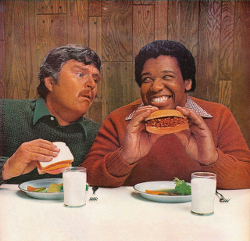 In a work from a series called Unbranded: Reflections in Black by Corporate America 1968–2008 (ca. 2006–10), an advertisement with the boxer Joe Frazier isn’t promoting Aunt Jemima syrup but rather margarine—that’s why he is wearing a Blue Bonnet. The Manwich ad, he said, couldn’t have existed ten years earlier, because working-class white and black men wouldn’t be sitting at the same lunch counter—and certainly the white fellow wouldn’t be craving the “dark meat” of the other. A Chevrolet ad depicts the long history of blacks but curiously erases their status as slaves. (Thomas discusses these same examples in his other artist’s lectures, as a quick perusal of YouTube tells us.) The Unbranded series displaces meaning, the artist said, by showing an “undressed image.” His removal and erasure of text and commercial logos reveals the not-so-hidden meaning of the images. It’s a classic John Berger analysis. Thomas strives to present universal ideas through abstraction of historical photographs.

Thomas talked about some sculptural and mixed-media work, noting that the phrases “I am a man” indicates a collective, and “I am the man” is self-centered. His bronze sculpture Raise Up (2014), based on a historical photograph from apartheid South Africa, depicts a row of male heads turned against the wall, arms raised in the air. The art historian and critic Kerr Houston explained the source: “In Raise Up, Thomas gives us the heads and arms of ten of the thirteen black miners pictured by [Ernest] Cole as they undergo a humiliating medical examination, in the nude.”2 The work was shown at Goodman Gallery in Johannesburg in June 2014. The shooting of Michael Brown in Ferguson, Missouri, which spawned the protest phrase “Hands up, don’t shoot,” took place two months later. The piece took on an unanticipated meaning. 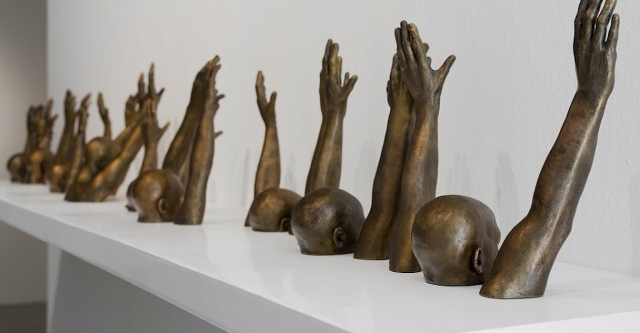 Thomas talked about his collaboration with Ryan Alexiev and Jim Ricks on a public-art project called In Search of the Truth (also known as Truth Booth), in which participants enter a structure shaped like a caption balloon and record a two-minute video during which they riff on the phrase “The truth is….” Truth Booth was first presented in Ireland in 2011 and has since traveled to South Africa, the United States, and Afghanistan. This work represents the artist’s interest in what other people think—sometimes being an artist involves listening more than anything else.

Since many artists are typically excited about their most recent projects, I found it odd that Thomas didn’t present the work in Unbranded: A Century of White Women 1915–2015, his most recent exhibition at Jack Shainmain Gallery in New York. For this new series Thomas removed the copy and logos from one hundred magazine advertisements depicting women, taking the suffrage era as a starting point.