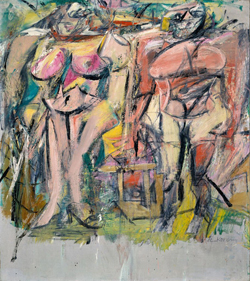 It was Willem de Kooning who once remarked, “Flesh is the reason oil paint was invented.”1 For artists from Peter Paul Rubens to Jenny Saville, this assertion is incontestable—there is no better way to portray human skin in the medium. De Kooning also said that “beauty becomes petulant to me. I like the grotesque. It’s more joyous.”2 The visual thrashing ones sees in the Abstract Expressionist’s midcentury paintings of women is not what the New York–based artist Clarity Haynes has in mind for her Breast Portrait Project, an ongoing series of paintings of women’s torsos that take the genres of both portraiture and the female nude in new and unexpected directions. Her view is more sympathetic to the women she paints, though the works still make some viewers uncomfortable, including me.

Over the past few years, Haynes has invited women from the New York LGBTQ community—typically her age or older—into her studio to pose. The smooth surface of her paintings, which have minimized brushstrokes that give off an airbrushed quality, belie the jagged topography of the people she portrays. The women are often large in size and in courage. Some bear surgical scars—such as those from mastectomy—and many have sagging skin, plump rolls, and stretch marks, conveying how the weathered body unravels after decades of living.

Haynes gave an artist’s talk at Trestle Gallery in Brooklyn, focusing on the Breast Portrait Project, setting aside other types of work she does. The event was held in the context of Body Utopia, a group exhibition of six artists at Trestle Gallery, which comprised color photographs by Chitra Ganesh and Pinar Yolaçan, three framed charcoal drawings by Riva Lehrer, two videos by Sondra Perry, a sculpture by Constantina Zavitsanos, and a painting by Haynes. Body Utopia was a judicious selection of expertly installed works in diverse media by an intergenerational group of artists, all focused on “bodies of color, queer bodies, bodies with disabilities, [and] bodies that don’t conform to societal norms and conventions,” as described by Priscilla Frank in the Huffington Post. It was Haynes’s first outing as a curator, and the first time she contextualized her art with that of her contemporaries. For the catalogue she wrote, “The making of art is, for some artists, the making of a utopia, because it posits an alternative space, medium, and reality through which to explore our subjectivities and our bodies. In other words, we get to call the shots.”3

During her talk, Haynes described the Breast Portrait Project and articulated her connections to feminism and to art history. She dates the project to the late 1990s, when she was regularly attending women-only music and cultural festivals like the Michigan Womyn’s Music Festival and Where Womyn Gather.4 After making a self-portrait of her torso (and later of several friends), Haynes decided to change her practice, which at the time was social action, studying film, doing murals, and “having every kind of job you could imagine—most of which involved wearing some sort of costume.” Anything but painting. At the festivals, which usually offered some sort of art activities, she would spend one to three hours, under a tent, drawing pastels of the exposed torsos of her fellow festival goers. Haynes would then give the finished work to the commissioning subject, but not before documenting it, and the person depicted, with a photograph and a written statement by the sitter. While the drawing left the artist’s possession immediately, Haynes has stayed in touch with several women from the festivals via Facebook, even though she may have only met them in person once or twice. 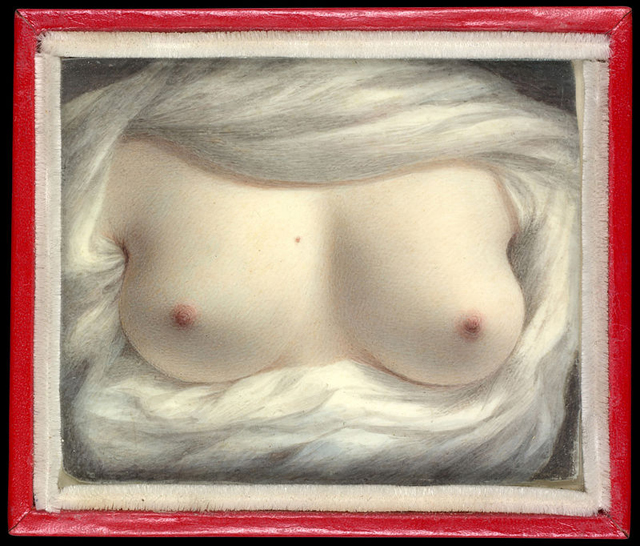 While the origins of the Breast Portrait Project lay in 1990s alternative culture, it has personal precedents from art history, which Haynes articulated. In particular she cited two works in the collection of the Metropolitan Museum of Art: Sarah Goodridge’s Beauty Revealed, a miniature 1828 self-portrait of her bare breasts, intended only for the eyes of the American politician Daniel Webster; and a lover’s eye painting from the eighteenth century. Both pieces offer a fragmented part of the body and emphasize privacy and intimacy. The oversized scale of the figures in Haynes’s recent paintings correspond to the Buddha Mahavairocana (Dainichi Nyorai), a larger-than-life wooden statue from the twelfth century housed in its own room at the Rhode Island School of Design Museum. When the artist revamped the Breast Portrait Project in 2009, she said, “I wanted to make feminist bodies that could be super large, super powerful.” These works, averaging five feet in height, were shown in 2011 at a solo exhibition at Tabla Rasa Gallery in Brooklyn, under the title Radical Acceptance.5 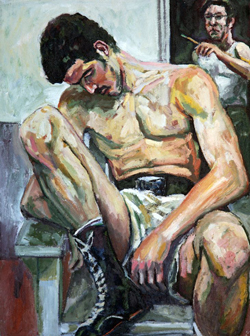 Haynes had decided to become an artist at age sixteen, and her lifelong interest in skin and detail is evident in a watercolor self-portrait from 1987. An early supporter of her resolution was Carlo Pittore, a New York figurative painter who had moved to Maine in the 1980s. It was Pittore who, over a summer they spent together and many visits after, encouraged her to have a strong work ethic, and to paint from life, as he did.

When she was younger Haynes admired the early work of Lucien Freud and Jenny Saville, but she now looks to Ellen Altfest, Rackstraw Downes, Catherine Murphy, and Josephine Halvorson, painters whom she said “record the facts.” A turning point for Haynes happened during a lecture by Altfest at the New York Studio School in December 2012, where Altfest described the long process for making her detailed paintings. After this talk, Haynes let herself develop a single painting for one to three years. Because she works from life, she gets to know not only the bodies she depicts but also the person inside them, like the trans bodybuilder Roxanne, whom she finished painting in 2012. “I really enjoy the long process of slowly getting to know the body,” Haynes said, “the specific body.” She continued, “It’s emotional when it ends, because you’re not going to have that regular time of seeing each other.” The relationships continue outside the studio: Leonora, whose breast portrait was hanging in the Trestle Gallery show, was in the audience tonight.

The general form of the Breast Portrait Project—frontal view, centered composition, neutral background, and a body cropped at the neck and waist—remains consistent. What varies is the shape, color, and texture of the woman, and also things like necklaces and clothing (pants). The artist realized the importance of such accoutrements after a year’s worth of comments by visitors to her studio.6 In each work Haynes includes a body’s changes over time, but she retains temporary details that she likes. “With Leonora’s tan lines, I was really having a hard time letting that go, because I really like those tan lines,” she said. “And there were times in the winter when they were not there, to the same extent.” Haynes’s subjects are sometimes solicited randomly: she found Leonora in a coffee shop, approaching the older, butch lesbian out of the blue. “Recently I met Dilma in the restroom of a doctor’s office. She was singing in the bathroom.” 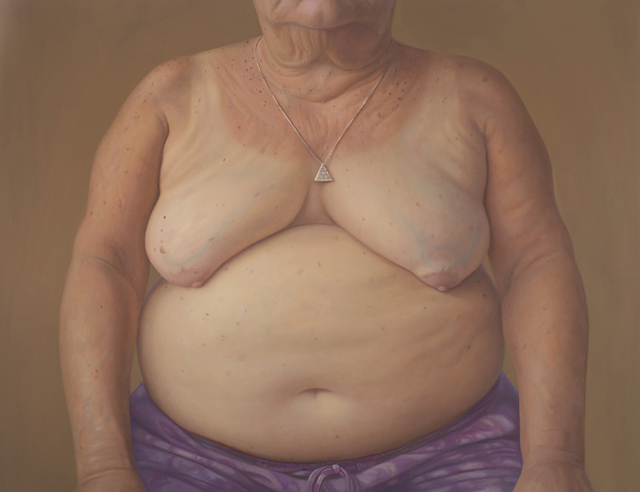 A triptych Haynes made as a student at the Pennsylvania Academy of the Fine Arts depicted three classic stages of life: youth, middle, and elderly. “I … think a lot about age in my work,” Haynes said. “I think about how old women are portrayed in art history,” through tropes like the maiden, mother, and crone. The art historian Svetlana Alpers, Haynes said, “pointed out that there’s a history of gendered distrust of detail in art.” Michelangelo disparaged Flemish painting as inferior to the Italian, tempera-based variety, writing a long paragraph about how Northern painters paint and to whom it appeals (“It will appeal to women, especially to the very old and the very young…”). If he spent all that time negating detail, Haynes remarked, it must have really bugged him.

One of the Body Utopia artists, Riva Leher, who was visiting from Chicago, offered additional observations about how Haynes’s work relates to art history. Northern Renaissance art has “the sense of a luminous, permanent present,” Leher said. And about Haynes’s work she observed, “There’s an inner luminosity in how you’re painting the body…. There’s a slow sense that the painter is telling you that the person you’re looking at is utterly worth your attention, is worth your quiet attention.” In Lucien Freud’s bravado painting, “there’s always a scrim between you and the subject,” which Leher likened to the British artist’s inner struggle and his dialogue with art history. We don’t see “his desire to bring you the pure presence of another human being, unmediated.” While all art is mediated in some way—including the apparently transparent qualities of even  trompe l’oeil painting—such realism plays a significant role in Haynes’s work. The subjects of the Breast Portrait Project are older bodies that are neglected, if not unseen entirely, in not just contemporary art but also our culture at large. 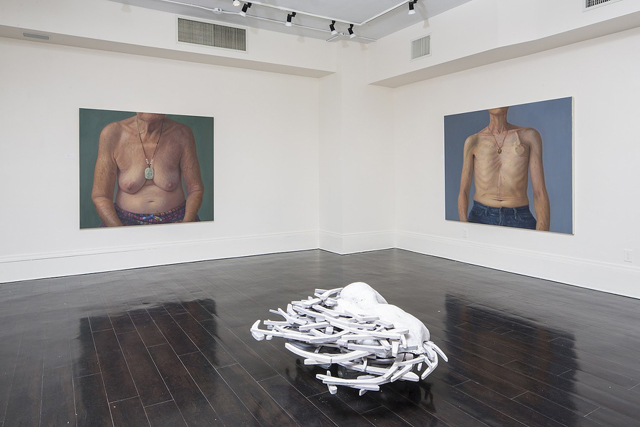 Installation view of two paintings by Clarity Haynes in a 2015 exhibition at the New Bedford Art Museum called A Collective Body: Uncovered and Illuminated; the sculpture in the foreground is by Stacy Latt Savage

Leher observed that Haynes’s work lacks blood, trauma, and other qualities that cause people to flinch. The artist agreed: “When people see a disabled body they see pain, and they will not [have] any other reading—they will see pain. I often find that if they see a scar, they see pain, and that’s not my intention, so it’s sometimes kind of frustrating. Because what I feel like I’ve learned … over time is that a trauma may or may not have been a physical trauma, depending on how people reacted, what the memory is.” For Haynes’s friend, a scar from open-heart surgery as a child was a good memory—everyone at the hospital treated her like a princess. Lehrer said that our society doesn’t have the language to approach scarring apart from the wounded warrior. During the last fifteen or so minutes of the talk, the artist and the audience had a good discussion about trauma, healing, and reclamation, about scars, intimacy, and body acceptance, and about gender and gender expression.

With a self-identified affinity for women’s spirituality and body-image consciousness of the 1970s, Haynes offers work with a striking balance between social and aesthetic issues—hitting the mark in every way possible.

2 De Kooning, quoted in John Elderfield, “Woman to Landscape,” in de Kooning, a Retrospective (New York: Museum of Modern Art, 2011), 277. Some sources give the quote as “Flesh was the reason why oil paint was invented.”

4 Haynes projected a photograph of a 1994 protest march with Riki Wilchins, the author of Read My Lips: Sexual Subversion and the End of Gender (1997), and the transgender activist Leslie Feinberg when MichFest articulated an informal policy about only welcoming attendees who were born female biologically. The conversation touched on the tension between respecting the pioneers of the feminist movement and pushing against their resistance to trans issues.

5 Haynes’s work has been chosen for the next Outwin Boochever Portrait Competition at the Smithsonian Institution’s National Portrait Gallery in Washington, DC. In addition, Stout Projects in Brooklyn will host a solo show of her work in February 2016. Haynes is also scheduled to speak at the New York Studio School on December 8, 2015.