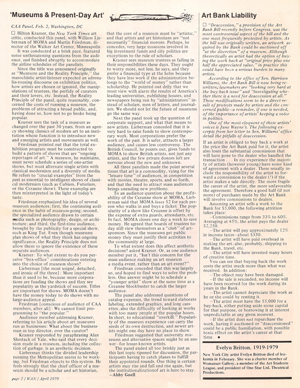 Since the original title of this panel was “Museums and the Reality Principle,” the artist-listener might have expected an adrenal in-rousing discourse on exhibition politics, how artists are chosen or ignored, the manipulations of trustees, the perfidy of curators and their lovers, etc. Instead, the Reality Principle at issue quite reasonably concerned the costs of running a museum, the problems of attracting a broad public, and how, having done so, not to go broke being popular. Hilton Kramer described the task of a museum over the past thirty years as changed, from an agency showing classics of modern art to an institution whose function is also to introduce new and emerging artists and movements.

Martin Friedman said the total exhibition program must be constructed to build a pattern of shows that are “ongoing reportages of art.” A museum must never schedule a series of one-artist shows, he maintained, but alternate single artists with classical modernism and diverse media. He sees “crucial examples” from the past as essential to intelligent shows of classical modernism (such as Cubism, Futurism, or the Cézanne show); these examples are then reinterpreted in the light of today’s taste.

Friedman noted that there are several museum audiences: first, the continuing audience in the habit of museum-going; second, the specialized audience drawn to certain media such as photography, design, or architecture; and third, the first-time audience, brought by the publicity for a special show, such as King Tut. Even though museums plan shows they think have ongoing significance, he said, the Reality Principle does not allow them to ignore the fact of these separate audiences.

Kramer asked the others how seriously “box office” considerations affect choice of museum shows. William Lieberman (the most soigné, detached, and ironic of the three) said box office has become more important, “because more corporations are funding the shows and they see popularity as the yardstick of success.” MoMA doesn’t have the money today to do shows without large-audience appeal. And, “titles are important for shows.” Friedman, who was conscious of speaking to an audience of, after all, CAA members, insisted, “We cannot limit programming to the popular.”

A member of the audience, referring to Kramer’s article about art museums run as businesses, asked him, “What about the businessman as top director, over the curator?” Kramer responded by paraphrasing Alan Shestack of Yale’s statement that every decision made in a museum, including the collection of garbage, is an aesthetic decision.1

Lieberman thought the divided leadership running the Metropolitan Museum seemed to be working, but Friedman objected, declaring that the chief officer of a museum must absolutely be a scholar and art historian, and that the core of a museum must be “artistic.” Artists and art historians, he said, “are not necessarily financial morons.” However, Friedman conceded that very large museums involved in big investment funds and city politics would be exceptions to the rule of scholars.

Kramer finds museum trustees failing in their responsibilities today. They ought to worry more, not less, he said. He also suggested that trustees prefer financial types at the helm because it’s less work for them when the administration belongs to the “world of money” rather than scholarship. He pointed out drily that we should view with alarm the fact that America’s leading universities, publishing houses, and newspapers are now run by “administrators,” not scholars, men of letters [sic], or journalists. We should not let museums go the same way, he said.

The panel then took up the question of corporate support, and what that means to new artists. Lieberman conceded that it’s very hard to raise funds to show contemporary work. Most corporations prefer art of the past. It’s safer, attracts a larger audience, and causes less controversy. The British Council, he pointed out, gives MoMA funds to show, not just any artists, but British artists, and the few private donors left are nervous about the new and unknown.

All three panelists pointed out several times that art is a commodity, vying for the leisure time of audiences in competition with movies, theater, and sports, and that the need to attract mass audiences brings unending new problems.

To a question from the floor about the profitability of MoMA’s Cézanne show, Lieberman said MoMA loses $2 for each person who walks in and buys a ticket. The extra attendance at a show like Cézanne is offset by the expense of extra guards and other personnel. In fact, MoMA closes one day a week to save money. He agreed that boards of trustees today still view themselves as a “club” of art sponsors, but that museums get public money and must justify their activities to the community at large.

Kramer asked to what extent this affects aesthetic decisions. Or, as one audience member put it, “Isn’t this concern for the mass audience making the art museum a media event, rather than an art event?” Friedman conceded that this was largely so, but said he hoped to find ways to solve the problem. One answer might be to schedule a “younger artist” show at the same time as a Cézanne blockbuster to catch the larger audience.

The panel also addressed questions of catalogue expenses [and] the trend toward elaborate labeling, extended graphics, and long cassettes, and acknowledged the difficulty of looking at art along with so many other people at the popular hours—in short, educational “overkill.” Popularity of the museum experience could carry the seeds of its own destruction, and newer artists might one day have no place to show. Friedman saw university museums and alternative spaces as a possible answer for lesser-known artists.

The panel ended all too briskly just as this last topic ripened for discussion, participants having to catch their planes to continue their appointed rounds. One thing is certain: artists may rise and fall and rise again, but the institutionalization of art is here to stay.

1 Alan Shestack was director of the Yale University Gallery of Art from 1971 to 1985, after starting work there as a curator in 1967.