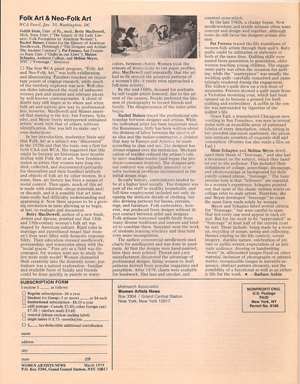 “Folk Art and Neo-Folk Art” was both exhilarating and illuminating. Panelists touched on important points of original research, while much new territory was explored. However, a cloud of doubt may still linger as to where and when folk art and naïveté give way to professionalism. Betty MacDowell and Rachel Maines asserted that training is the key, but their fellow panelists freely interspersed untrained artists’ work without distinctions. One was left to make one’s own deductions.

In her introduction, Judith Stein said folk art was “discovered” in the 1920s, but that this panel was the first on the topic for either College Art or the Women’s Caucus [for Art]. She suggested this might be because art historians have trouble dealing with folk art as art. Now feminism makes us aware that women have long studied, collected, and documented (primarily for themselves and their families) artifacts and objects of folk art by other women. Then again, much of this art is made with relatively cheap materials and/or discards, so perhaps art historians really had difficulty understanding and appraising it. Now there appears to be a growing revolution in taste allowing us to begin, at last, to evaluate and document the work.

Betty MacDowell, whose new book is Artists and Aprons, pointed out that eighteenth- and nineteenth-century women’s folk art was shaped by American culture. Rigid roles in marriage and parenthood meant that women’s lives were filled with domestic responsibility. Their education stressed needlework, penmanship, and watercolor, along with the “social graces.” Entering the “fine” arts was discouraged for women, who were not allowed to study the live male nude, so they channeled their creativity into the domestic scene. Portraiture was popular, because familiar and available faces of family and friends could be done quickly in pastels or watercolors, between chores. Women also took the scissors of domesticity to cut paper profiles. MacDowell said repeatedly that the art had to fit into accepted patterns of a woman’s life; it rarely even approached a full-time activity.

By the mid-1800s, with the advent of the camera, demand for portraits by self-taught artists lessened. People preferred the likeness of photographs for recording friends and family, and the naïve artist began to disappear.

Rachel Maines, author of “The Designer and Artisan: The Ancient Contract,” traced these professional relationships. Little has been written about the division of labor between the creator of an idea and the maker-constructor, a division that in Europe and America may be made according to class and sex, with the designer reigning over the technician. Mechanization of textile-making reduced the artisan’s role to mere machine tender and began the producer-consumer division.

In early times, embroiderers often had a higher status. In wealthy households, the designer was part of the staff and devised patterns for linens, curtains, rugs, and furniture, besides intricate details of clothing. Folk embroidery, however, borrowed and combined motifs freely from many sources. Samplers, the work of students learning stitchery, held even more incongruities.

The earliest commercial needlepoint used hand-painted charts. Later they were printed, when thread and yarn manufacturers hired women to draft patterns derived from popular magazines and pamphlets. After 1870, charts were available for beadwork, filet lace, crochet, and counted cross-stitch. Various forms of these are still available in the hobby or home craft market, but needle workers and textile artisans often want concept and design wed together.

Pat Ferrero … traced the life transitions of women folk artists through their quilts. Baby quilts could be utilitarian or elaborate or both. Quilting skills were passed from generation to generation, women teaching young children. The engagement party was often the occasion for quilting, while the “masterpiece” was usually the wedding quilt—carefully conceived and painstakingly rendered during the engagement. The widow’s quilt drew on a rich store of memories. Ferrero showed a quilt made from a Victorian mourning coat which had been opened up to become ground for both quilting and embroidery. A coffin in the center was surrounded by vignettes of the quilter’s life.

Several of Ferrero’s slides showed Grace Earl, a transplanted Chicagoan now working in San Francisco, with an incredible array of patterned fabrics which she pieces into intricate coverlets of exquisite skill and conception in her crowded one-room apartment. (Ferrero has also made a film on Earl.)

Mimi Schapiro and Melissa Meyer distributed a document to the audience with their definitions of collage, assemblage, découpage, and photomontage as background for their jointly coined phrase, “femmage.” Their premise is that “leftovers” are essential to a woman’s experience. Schapiro pointed out that most of the classic written works on collage refer to male artists. She and Meyer developed “femmage” to mean the form made solely by women.

Meyer and Schapiro listed several criteria for “femmage” but were careful to state that not every one need appear in each object. But for the work to be “appreciated” as “femmage” at least half the criteria must be met. These include being made by a woman, recycling of scraps, saving and collecting, themes related to life contexts, covert imagery, diaristic nature, celebration of private or public events, expectation of an intimate audience, drawing or handwriting “sewn” in, silhouetted images fixed on other material, inclusion of photographs or printed matter, recognizable images in narrative sequence, abstract pattern elements, and the possibility of a functional, as well as an aesthetic, life for the work.

Written by Barbara Aubin, “Sublime Leftovers” was originally published in Women Artists News 4, no. 9 (March 1979): 12; and reprinted in Judy Seigel, ed., Mutiny and the Mainstream: Talk That Changed Art, 1975–1990 (New York: Midmarch Arts Press, 1992), 115–16. In Terms Of thanks Midmarch Arts Press for permission to republish this review.