Get Off the Internet

Begun in March 2015, this essay was completed and published during a November 2015 residency at the Luminary in Saint Louis, Missouri.

I Will Resist with Every Inch and Every Breath: Punk and the Art of Feminism
Thursday, March 12, 2015
Brooklyn Museum, Elizabeth A. Sackler Center for Feminist Art, Iris and B. Gerald Cantor Auditorium, Brooklyn, NY 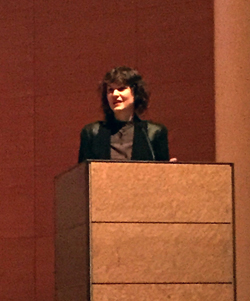 From an aesthetic point of view, the term “punk”—whether referring to a music genre, a fashion style, or a nonconformist attitude—has generated an incredibly diverse creative output that ranges from cynical and nihilistic to self-empowered and ethically sound. Tonight’s panel, organized by A.I.R. Gallery and the Women and the Arts Collaborative at Rutgers University, addressed the passionate, potent combination of youth rebellion, women’s rights, and fast, furious music through the stories of five panelists who emerged from various punk scenes in the United States. The moderator of the panel, Leah DeVun, an artist and a professor of women’s and gender history, described the difficulty of summarizing each speaker’s impact on art, music, and culture into a one-paragraph introduction. One crucial thing, she contended, is that punk still has the power to fight the status quo.

In a leather vest and boots, the singer, musician, author, actor, and spoken-word performer Lydia Lunch took the microphone and walked to the front of the stage, where she declared that she was No Wave, not punk. As opposed to the London variety, Lunch explained, “punk in New York was personal insanity, personified and thrown onto the stage.” Declaring affinities with the Surrealists and Situationists, she said, “I have always been fucking resisting.”

Lunch grew up in Rochester, New York, and experienced the city’s race riots of 1967 as an eight-year-old. As a teenager she ran away from home, leaving behind her “asshole” father, a door-to-door Bible salesman, for a thriving underground scene. Finding Patti Smith inspirational but traditional, Lunch channeled her rage through abrasive music, angrier and artier than the punk of the Ramones. “I had a band that sounded like Teenage Jesus and the Jerks,” she spat out, “at the same time I had a band that sounded like a slug crawling across a razor blade.”1 Other musical projects adopted other genres, such as big band.

“Somebody had to come out with a woman’s voice and articulate aggression,” Lunch avowed, “and use some of the enemy’s language and put it right back in their fucking face. And that is basically what I’m still doing today, whether that’s through literature, art, photography, music, illustrated work, or writers’ workshops.” Her work over the past forty years can be characterized by a resistance to the patriarchal cycle of abuse. “Details are specific,” she said. “Trauma is universal.”

Wearing her signature plastic mask, the artist and performer Narcissister read a short statement paper that outlines her project: to use intense eroticism, humor, and spectacle to address gender and racial identity and issues of representation. She presented images of Narc vs. Judy, a recent work made during a Yaddo residency, in which she placed vegetables and thrift-store bric-a-brac on the pages of a book on Judy Chicago’s canonical installation, The Dinner Party (1974–79). The older artist inspired Narcissister for several reasons—both changed their name as “a symbolic statement of self-determination” and both create vaginal imagery. Narcissister screened an eleven-minute draft of a video in progress, also made at Yaddo, that retells the story of “Little Red Riding Hood” with sexually explicit glee. 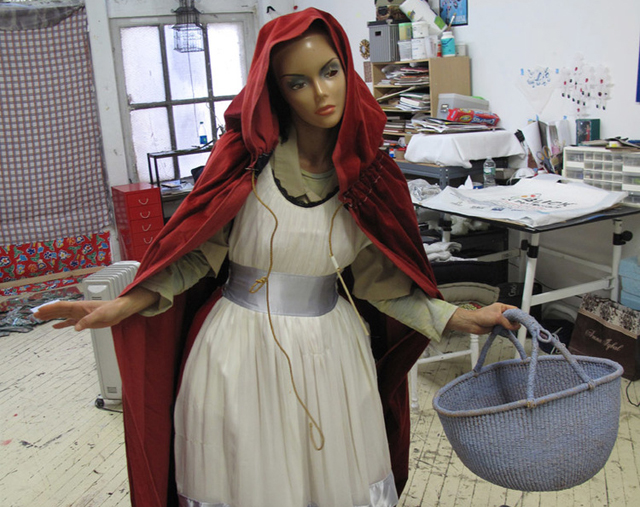 A champion of DIY, the curator Astria Suparak was a self-described Riot Grrrl as a teenager in Los Angeles. Working without formal curatorial-studies training or even a master’s degree, she surveyed her career in three parts: as a student, as an independent curator, and as an institutional employee. In the late 1990s, Suparak programmed a film series at Pratt Institute in Brooklyn, where she was an undergraduate, that showed experimental work, hard-to-find work, and the work of women, queers, and other marginalized groups. Because Pratt sponsored the project—nearly one hundred events in all—through student-activities funds, admission was free.

Suparak connected with the larger experimental film scene in New York, which helped her as an independent curator after the turn of the century. She organized projects merging film and video, audio and music, live performance, and one-night art exhibitions; she even used dance and dinner parties as a medium. With the “rock-band model” for her activities, she “did a lot of shows in bars during those years,” in addition to nontraditional spaces: an abandoned mall in Louisiana, a disco hall in Dublin, and a roller-skating rink in Philadelphia. 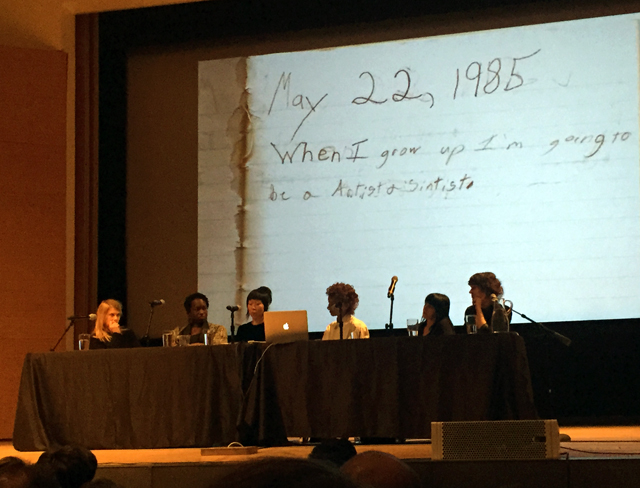 The third phase of Suparak’s career is unfolding in university galleries, where she seeks to expand an institution’s identity and audience, bringing in engineers, sociologists, and sports fans. “My curatorial work isn’t only meant for art-world consumption,” she stated. Since 2013 Suparak has been touring Alien She, an exhibition organized with Ceci Moss that originated at Carnegie Mellon University in Pittsburgh (which fired her early last year). Named for a Bikini Kill song, Alien She is not a history show but instead foregrounds the nonmusical “creative output” spawned by the early 1990s cultural moment of Riot Grrrl.

Osa Atoe, creator of the music fanzine Shotgun Seamstress, is a potter and art teacher based in New Orleans. Growing up in northern Virginia in the 1990s, she read record reviews for Smashing Pumpkins and Courtney Love in magazines like Spin and Rolling Stone, Raygun and Venus. (Her friends listened to TLC and Boyz II Men, and her parents to Afropop and R&B.) A believer in self-education, Atoe played in and toured with bands and did volunteering and organizing in Washington, DC—she finished college at age 28. Later, as a black woman in Portland, Oregon, she was surrounded by white liberals whose attitudes toward race she found awkward.

Looking for a means of expression all her own, Atoe found inspiration in the “educational and cathartic” zine Evolution of a Race Riot, which demonstrated to her that an audience for black punk culture existed. Yet when making a Maximum Rocknroll or Punk Planet for black kids, she said, “I didn’t want to come from a place of critique.” Not limited to music, she wrote about the photographer Alvin Baltrop and the video artist Kalup Linzy.

“For better or worse, whether I like it or not,” said the writer and musician Johanna Fateman, “I’m associated with the historical movement of Riot Grrrl … which I’m happy about.” Though she said the movement was over by 1994, she channeled its energy into a set of strategies to make art for a wider audience—not just for a scene.2 One way to express her relationship to music and politics was through writing. Fateman read an early piece reflecting on a performance by the Bay Area lesbian punk band Tribe 8: “It was extreme” and “extremely interesting to us as sixteen year olds” to stumble aross “the stupid gratification of live performance of punk music.” She also read excerpts from articles on Sara Marcus’s book on Riot Grrrl for Bookforum; on her band Le Tigre for the Red Bull Music Academy; and on her experience writing a song and shooting a video for Pussy Riot’s appearance on the television show House of Cards for Art in America.

During the audience Q&A, an attendee asked Suparak how she funded her projects. With several scales of economy, she responded. When she worked without a budget for events in living rooms and abandoned malls, the participants were aware of the situation (and were okay with it). At bars, Suparak split door revenue with the venue. “Universities have money,” she reminded us, saying she included a few tour stops at schools to keep a project afloat. For a while, Suparak sacrificed having an apartment to save money: “I was living out of a suitcase” and bartering. With punk, DeVun chimed in, you don’t need permission or even to know what you’re doing. 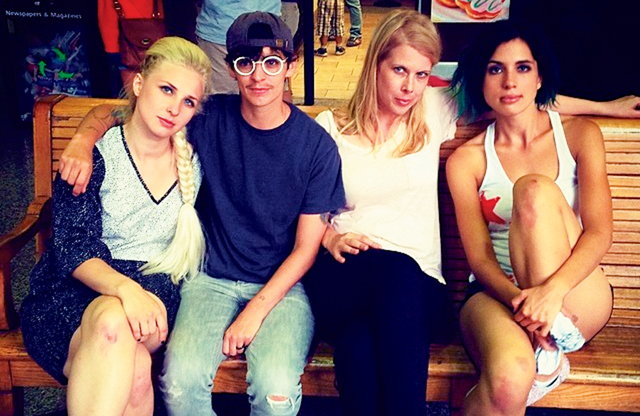 An attendee asked the panelists to respond to Tumblr feminism, which apparently takes extreme positions and attracts online trolls. While advocacy certainly takes place on the internet, “you should be out in public doing it,” urged Lunch. That said, Atoe finds it important to have an online counterpart to real-world projects to reach those who can’t get a physical zine.

Venues and institutions mattered to the audience. “I don’t expect to see feminist performance art in a gay bar full of shirtless men,” a male attendee told Narcissister. While that may be true, she broadens her reach by performing in alternative spaces, night clubs, galleries and museums, and performance-art festivals. The art world misunderstands the intellectual complexity of her work, Narcissister said, and gets confused by a more public approach—like when she wowed the nation on America’s Got Talent in 2011.

Another audience member inevitably asked how punk survives in an institutional context—isn’t this selling out? While Lunch acknowledged that mind-blowing stuff is happening in small venues like Death by Audio in Brooklyn, museums are acceptable punk spaces. Sometimes at underground clubs, she joked, “it’s me and twenty fat guys with beards.” To go to a really underground punk show, DeVun said, you need to be the person “who knows to go under the fence, around the corner, and through the hole” to get there. Atoe maintained that tiny shows in intimate settings have great personal meaning. “I’m sick of squats myself,” Lunch fired off at the original questioner. “I was sick of squats before you were born.” 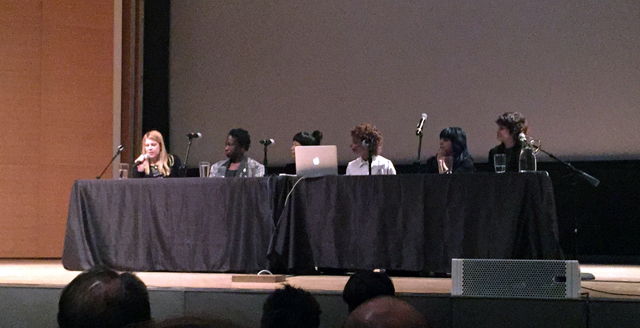 You can’t get 350 to 400 people in a small club, Suparak remarked, referring to the size of tonight’s audience at the Brooklyn Museum, and institutions offer skilled technicians and designers—people to which artist may not have access. “The idea of museums as elite places is false,” Suparak stated. Atoe urged people to “create the kind of atmosphere that you want to be in,” especially in male-dominated music scenes, which is why she started booking shows in the first place. Lunch had the last word: “as long as you can communicate, I don’t really care where it’s at.”

Does archiving change the nature of the medium of zines, someone asked the panel. Eschewing rarity and meeting demand, Atoe has made copies of the first two issues for people for eight years. Fateman said she could neither preserve her archive on her own nor handle every researcher’s request for material, so she donated it to the Riot Grrrl Collection at the Fales Library and Special Collections at New York University, which comprises zines, letters, flyers, photographs, audio recordings, videotapes, and much more. While her early creative expression is embarrassing, Fateman admitted, people are interested. Now her work is contextualized with that of her peers. Archiving changes zines, Fateman conceded, but so does time. The intersection of punk and feminism has changed since the late 1970s, but the interest of tonight’s audience proved that it has persevered and remains as relevant as ever.

1 This band was Beirut Slump.

2 During the audience Q&A, Astria Suparak said the majority of people who associate with Riot Grrrl today are in Central and South America—especially Mexico City.

Osa Atoe, “I Will Resist with Every Inch and Every Breath: Punk and the Art of Feminism,” Shotgun Seamstress, March 24, 2015.