The Most Bleed Possible

This essay was largely written during a November 2015 residency at the Luminary in Saint Louis, Missouri.

Though the outrageous antics of Jim Jones and Charles Manson reverberate through the American public consciousness, a broad history of less-sensational activities from the 1960s and 1970s probably had a larger if surreptitious impact on US culture. Encounter groups, the human potential movement, large-group awareness training: these cultic approaches to self-actualization came shortly after mind expansion through psychedelic drugs in the sixties and just before business motivational seminars and self-help gurus of the eighties (followed by the deliriums of late-night religious programming and inspirational infomercials). Today, soccer moms practice yoga and mindfulness is all the rage, but once upon a time, New Age ideas were a serious threat to mainstream Judeo-Christian values. The objectors were partly correct, but I digress.

Born in Mexico, Brody Condon is an American artist working in Berlin who has recently been mining the New Age practices of the Esalen Institute and Erhard Seminars Training, among other groups, cults, and otherwise strange organizations, through an aesthetic lens. Using live action role play (LARP) as an artistic form, Condon creates scenarios of psychic strain through what he calls performance engines, described during a lecture at the School of Visual Arts as “creative performative systems that drive action … that drive social choreography.” Through these events—typically documented on video—he produces not only an “emotional significant group encounter but also a psychologically charged art critique.” 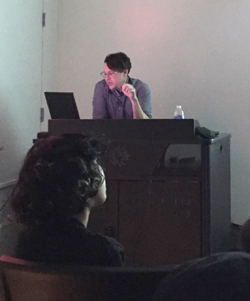 Crucial to Condon’s practice is gestalt practice, which he described as a conception of the physical body, the environment, and the mental state of the individual as an integrated, organic whole. Conversation gestalt therapy, he said, focuses on an individual’s expression and experience of the present moment—there is neither past nor future. Condon is not interested in actual healing and trauma. Likewise, there is no crossover with drama therapy or art therapy. Participants are supposed to maintain some critical distance when in the moment. The artist emphasized that performance engines are an alternative to, not a replacement for, real political dialogue. He also framed his work as an “experiential essay.”

Some works come across as simple. For Circles of Focus (2015), one project from a four-year collaboration with the Scottish artist Christine Borland, people were encouraged to free-associate about museum objects they handled. Other pieces are just plain weird. Extracurricular Anatomy (2015) took place at the Laboratory of Human Anatomy at the University of Glasgow, where Condon and Borland devised a performance for five fourth-year anatomy students, three cadavers (two real, one played by a living person), and a carnivorous plant. One participant uttered sounds when touching parts of the cadaver, which the plant positioned above the body’s head “interpreted.” A second person “psychically communicated” with the plant and told a third where to dissect a geometric section from the body. “Yeah … that happened,” Condon said.

The finished version of Future Gestalt (2012) consists of video of the fifth and final session of a performance that took place under a Tony Smith sculpture Smoke (1967), installed at the Los Angeles County Museum of Art—a building designed by the architect William Pereira that, for Condon, represents an “antiquated version of the future.” Smith’s sculpture embodied the “facilitator,” intended to be an artificial intelligence or “interdimensional entity” that, like a cult leader or psychotherapist, guided the four performers. Wearing colorful, loose-fitting robes and “playing fictional versions of themselves in the future,” the performers spoke to the sculpture, sometimes in shrills, clicks, and whispers; it also talked to them. The audio of Condon’s instructions and commands (such as “focus,” “responsibility,” “empathy,” an “control”) was split, with a clear signal sent to the performers’ earpieces and garbled distorted audio filled the room at LACMA. Watch the clip below for a taste of the work.

LARP communities throughout the world volunteer to participate in Condon’s works. He also posts open casting calls, which convene both professional actors and regular folks, but the artist’s approach that contrasts the feel-good nature of most audience-involved art. Before screening footage from Zeigarnik Effect (2015), commissioned by Momentum 8: The Nordic Biennial, Condon explained, “I’m not casting, and they’re not performers. I’m providing a service for them. I’m providing an event for them to immerse themselves in, for a day to five days at a time. And often they pay me to participate.” This low “token fee” gives him more power as an artist and “changes the power dynamic of participatory work.” In museums, artists typically treat visitors as material. Condon perceives himself as a service provider. A live feed of Zeigarnik Effect was presented in a split screen. Condon said this was a nod to the psychiatrist Ian Alger, who in the 1970s introduced the two-camera technique in therapy. Alger would simultaneously record both sides of a patient’s face; the patient would choose the preferred side—or something like that.

The concept and script for Level Five (2010–11), the earliest and most historically grounded work, drew from elements of Erhard Seminars Training, Alcoholics Anonymous, Scientology, and gestalt therapy. Level Five was Condon’s reconceptualization of self-actualization seminars, using two actors with years of LARP experience to keep the psychological flow going (what he called “run-time game management”) during the two-day event. The performers—a mix of LARPers, actors, and volunteers—arrived as characters, emoted as them, and stayed in character for the duration of the piece. Filmed with three cameras, Level Five was streamed live next door, at the Hammer Museum’s theater. Perhaps not coincidentally, the Hammer has been offering weekly Mindful Awareness sessions since 2012.

“In role playing,” Condon said, “bleed happens when the thoughts and feelings of the character start affecting the player, or vice versa.” Coming from a background in performance art, he wants “the most bleed possible.” Back in the day—Condon played Dungeons and Dragons as a kid—it was off limits for role-playing games to affect your real life. Today there are levels of bleed. “Rather than forgetting the existence of an original self,” the artist said about Level Five participants, “the character becomes a tool for projection, self-exploration, and experimentation.” Sometimes performers intentionally try to puncture the illusion; sometimes they experience a minor schizophrenic break. For each work trained professionals are on hand, Condon revealed, to pull a person aside in either case. “We can’t stop these events,” he said. “Once they start, they run…. If they hate what’s going on, they leave.”

One wonders exactly what Condon gets out of the whole thing—he is the one instructing people to inhabit a fictional character whose personality is subsequently gutted. Getting to the core self of a fictional person is “the funnest part to me, it’s the most twisted part.” He explained: “You’re attending a seminar that’s meant to push you, to get you to the core of your being, to strip layers of your socially constructed personality—but you’re doing that as a fictional personality.” The idea is twisted indeed, and you wouldn’t get the same results with a film or stage play. At the time of conceiving Level Five, Condon said, “I was interested in the genealogy of New Age culture in the United States.” After thriving in the 1970s, he told us, the human-potential movement was depoliticized and sold it back to the masses via motivational seminars for businesspeople, Silicon Valley entrepreneurial philosophy, and life coaching.

A work looking beyond the West, Four Sessions (2014), was executed in Seoul, South Korea, for the fourth Anyang Public Arts Project. Condon found four traditional craftspeople—an instrument maker, a mother of pearl inlay master, a mudang shaman, and a slack-line performer (a.k.a. a tightrope walker)—that are Intangible Cultural Treasures in Korea and identified by a number. He instructed them to pick an object from their studio or to collaborate with him to make an object. Number 24 (the lacquer craftsman), for example, brought a bowl he was never able to finish because it was tied to a past trauma, and Condon made a drum with Number 30 (the instrument maker). Again borrowing from gestalt therapy, the artist ordered the participants to converse with these objects, which spoke back. What’s more, the Intangible Cultural Treasures pretended to be an inanimate object themselves that their objects, now alive, talked to. The piece of rope that belonged to Number 58 (the slack-line man) chastised him for failing to practice.

Four Sessions felt like the weakest of the projects Condon presented, but that’s probably because the video clips he showed lacked English subtitles. (The excerpts on Vimeo are now translated.) I also got the impression that Condon struggled to maintain order—the participants seemed to battle with him directly and indirectly. Though they were instructed to come alone, they brought family members and apprentices. One man’s daughter and her friends played with their cell phones while the sessions took place. The stubborn shaman resisted the academically trained mediator for Four Sessions, a Korean psychotherapist who did PhD research on the history of shamanism. The psychotherapist, in turn, did not bow to Condon’s authority. There was also a certain amount of bickering. Common trait among the four Intangible Cultural Treasures, the artist said, were peer jealousy, worries about money, and complaints about corruption within the Intangible Cultural Treasure system. Perhaps the difficulty was that the four participants did not adopt a persona or role. They were playing themselves going through a somewhat experimental therapy session that was too much like garden-variety psychotherapy.