Next Question: Is Art Dead?

This early painting panel was one of the best—real feeling on urgent issues expressed to an audience of peers. Today we may smile complacently at the title question. At the time, art’s higher authorities had declared painting dead and buried. Perhaps it was only some sense of a coming rebirth that gave painters courage to ask the question out loud. But when Nicholas Krushenick says “I LOVE THE ACT OF PUTTING PAINT ON CANVAS!” we hear the voice of the votary since the Renaissance. (Will video artists some day say how they love clicking in that cassette and watching the little light come on?)

One other note: artists reading this report in 1975 would have known that “The Article” referred to “The Painted Word,” an article by Tom Wolfe which had recently missed the point about painting in Harper’s Magazine. Shortly thereafter it was published as a book, achieving wide notoriety, if not acclaim. Today I had to think a moment to identify it. 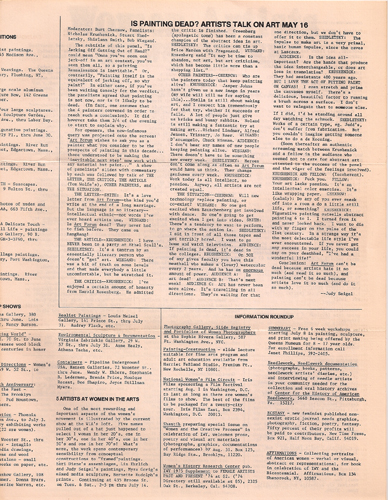 The subtitle of this panel, “Is Jerking Off Getting Out of Hand?,” could mean anything from, “Once you’ve seen one jerk-off in an art context, you’ve seen them all, so a painting renaissance is inevitable,” to “Painting itself is the equivalent of jerking off, so why paint?” In either case, if you’ve been waiting tensely for the verdict, the panelists agreed that painting is not now, nor is it likely in the foreseeable future to be dead. In fact, one assumes that the four painters convened exactly in order to reach that conclusion. It did, however, take them three-quarters of the evening to start to explain why.

For openers, the now-infamous query was projected onto the screen: “Artforum wishes to ask you as a painter what you consider to be the prospects of painting in this decade. [T]hose understood to be making the ‘inevitable next step’ now work with any material but paint….” A show of panelists’ slides with commentary by each was followed by talk of The Letter, The Article, The Critics, Other Painters, and The Situation.

Shirlann Smith: It’s a love letter from Artforum—the kind you’d write at the end of a long marriage. But the language is so literary—intellectual, not words I’ve ever heard artists use.1

Robert Wiegand: Is Artforum dead? They never had to fish before. They came on Bang! Bang!

Stuart Shedletsky: It’s a tantrum by an essentially literary person who doesn’t “get” art.

Wiegand: There was a bit of truth on some levels and that made everybody a little uncomfortable, but he stretched it.

Nicholas Krushenick: I have never been to a party at Ethel Scull’s.

Krushenick: I’ve enjoyed a certain amount of honesty from Harold Rosenberg. He admitted the critic is finished. Greenberg [apologetic tone] has been a constant champion of die abstract idea in art.

Shedletsky: The critics can tie up Brice Marden with Fragonard.

Wiegand: Rosenberg said, “It may be time to abandon, not art, but art criticism, which has become little more than a shopping list.”

Burt Chernow: Who are the painters today that keep painting alive?

Krushenick: Jasper Johns hasn’t given us a new image in years. (My wife will kill me for saying this.) Stella is still about making art, and I respect him tremendously for that, whether it succeeds or fails. A lot of people just give us bricks and bunny rabbits. Noland is still making a fantastic try at making art…. Richard Lindner, Alfred Jensen, Yrisarry, Jo Baer.

Wiegand: There doesn’t have to be something new every week.

Shedletsky: Heroes don’t come along as often as Artforum would have us think. They change geniuses every week.

Krushenick: Work today is all intellect, no passion. Anyway, all artists are not created equal.

Smith: There’s a tendency to want to perform, to go where the action is.

Shedletsky: I sit in front of all those tapes and get terribly bored. I want to go home and watch television.

Audience: If painting is dead, it’s dead in the colleges.

Krushenick: On 50 percent of any given faculty you have this meatball who makes a (lousy) watercolor every two years. And he has an enormous amount of power.

Audience A: Is art dead?

Audience B: That’s next week!

Audience C: Art has never been more alive. It’s traveling in all directions. They’re waiting for that one direction, but we don’t have to offer it to them.

Shedletsky: The impulse to make art is a very primal, basic human impulse, since the caves at Lascaux.

Audience: Is the idea all important? Are the hands that produce the idea interchangeable, or does art lose in translation?

Krushenick: They had assistants four hundred years ago. BUT I LOVE THE ACT OF PUTTING PAINT ON CANVAS! I even stretch and prime the canvases myself. There’s a delicious, beautiful factor to running a brush across a surface. I don’t want to relegate that to someone else. If I did, I’d be standing around all day watching the schmuck.

Shedletsky: Works of a certain type, for example, Judd’s, don’t suffer from fabrication. But you couldn’t imagine getting someone else to do a de Kooning.

About here a bona fide screaming match between Krushenick and a fellow in the audience who seemed not to care for abstract art attested to the success of the panel and the vigor of feelings about art.

Chernow [calmly]: Do any of you ever sneak off into a room a do a little still life, or something?

Krushenick: Figurative painting outsells abstract painting six to one. I turned from it and never looked back. I want to die with my finger on the pulse of the twenty-first century. In a strange way it’s the most delectable life style I’ve ever encountered. If you never get any success in your life, you could say on your deathbed, “I’ve had a wonderful life!”

1 The full text of the letter appears below. The responses from artists were published in the September 1975 issue.

Artforum wishes to ask you, as a painter, what you consider to be the prospects of painting in this decade. It appears that painting has ceased to be the dominant artistic medium at the moment. And we assume that the debates between its two major ideologies, abstract and representational, have outlived their usefulness to the current scene. Our thinking here refers to the fact that neither side has triumphed over the other in a historical verdict to which both had appealed. On the contrary, those understood to be making “the next inevitable step” now work with any material but paint.

1. How do you think this has affected the need to do painting today and the general morale in the field?

2. What possibilities, not found elsewhere, does this medium offer you as an artist?

3. What energies and ideas in painting strike you as worth attention, and why?

Written by Judy Seigel, “Next Question: Is Art Dead?” was originally published in Women Artists Newsletter 1, no. 3 (June/July 1975): 3; and reprinted in Judy Seigel, ed., Mutiny and the Mainstream: Talk That Changed Art, 1975–1990 (New York: Midmarch Arts Press, 1992), 13–15. In Terms Of thanks Midmarch Arts Press for permission to republish this review.