Where All the Action Is 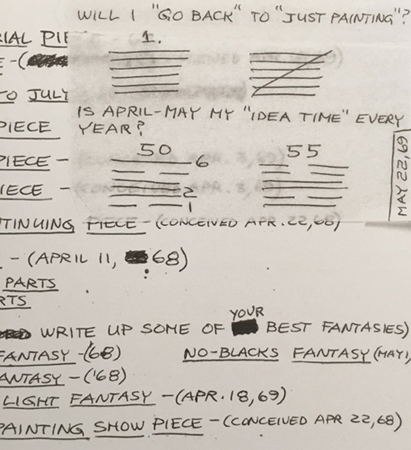 In her notebooks, Lee Lozano asks herself, “WILL I ‘GO BACK’ TO ‘JUST PAINTING’?”

I first discovered the work of Lee Lozano (1930–1999) in 1997, when reading the reprint of Lucy R. Lippard’s classic chronology of Conceptual art, Six Years: The Dematerialization of the Art Object from 1966 to 1972. The descriptions of Lozano’s experientially based art from the late 1960s, including Dialogue Piece, General Strike Piece, and Grass Piece, were among the most compelling in the book. Because of the radical nature of these works—making art from talking, from art-world protest, and from the desire to “stay high all day, every day”—I thought everyone knew about her.1 So when Lozano was rediscovered in the early 2000s, having left the art world for good thirty years earlier in her infamous Dropout Piece (initiated in the early 1970s), I was surprised. But upon reviewing the artist’s slender exhibition history and bibliography during the eighties and nineties, her omission from the historical record was clear.2

The first question posed by Robert Nickas, the moderator of tonight’s conversation at Hauser and Wirth, was this: When were you first exposed to Lozano? The painter Jacqueline Humphries said she first saw Lozano’s work in the traveling exhibition High Times, Hard Times: New York Painting 1967–1975, organized by Katy Siegel and David Reed, at the National Academy Museum in 2007. Humphries had also read Siegel and Reed’s conversation about the artist, published in Artforum in 2001. The conversation’s third participant, the artist Jutta Koether, became acquainted with Lozano’s work “as a concept, as an idea” in the 1990s—through Nickas, actually. Strangely, based on her words and expressions, it seemed as if Koether had never actually seen Lozano’s work in person before tonight. 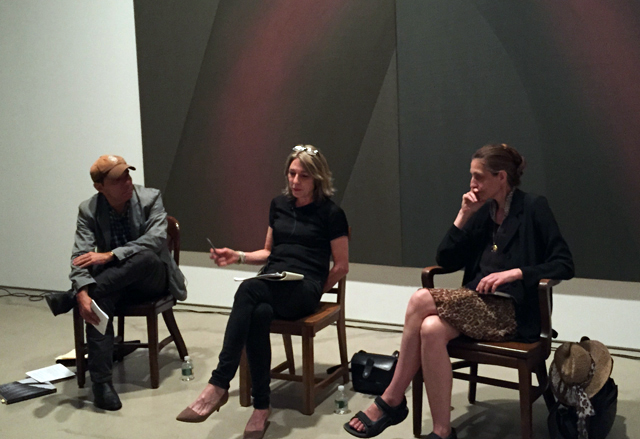 Tonight’s conversation was held in conjunction with an exhibition of five large paintings and numerous tiny drawings from 1964 to 1966, Lozano’s fourth solo show with the gallery since 2007. Despite Nickas’s unconventional approach to curatorial work and criticism, and despite his longtime support of Lozano’s work—he organized Lee Lozano, Drawn from Life: 1961–1971 at P.S.1 Contemporary Art Center in 2004—he framed the discussion around clichés: the death of painting, the artist as outlaw, the inadequacy of categorization, the goodness of failure, the performative turn, and, of course, the rediscovery of forgotten artists. Doing so produced a mostly stilted, directionless talk—the speakers missed the mark, and not positively so. Maybe they just didn’t prepare ahead of time. In spite of these obstacles, the talk had numerous moments of interest.

Koether is attracted to Lozano’s multifarious practice: her process, her being female, and her “antagonistic propositions about failure and rejuvenance [sic] of painting.” Hauser and Wirth’s current exhibition created a “highly problematic proposition about Lozano” that interrupts her unified idea of the artist. “There’s not one Lee Lozano,” Nickas reminded her, briefly describing each of her five periods, such as the Tools works, the Wave paintings, and the written conceptual pieces, which came quickly over her ten-year career. Humphries said that museums often misrepresent an artist’s diverse body of work with an authoritative, streamlined version, and most artists she knows do a bunch of stuff. Well, duh.

Why did Lozano paint, Nickas asked, when she could have done anything? “Is painting acquainted with winning [more] than any other practice?” he wondered. Looking around the room, Humphries saw something unique in the paintings that viewers, both then and now, can’t come to grips with. “The visual cues in the paintings are very few,” she said. “They do something else.” Lozano wasn’t reliant on anyone, Koether conjectured. “She would want to paint because people told her not to.” Koether then launched into a meandering filibuster that barely made sense, followed by a similar monologue from Humphries. The group was at its weakest when discussing the physical qualities of the paintings in the room, yet Nickas didn’t bring the conversation back to earth. 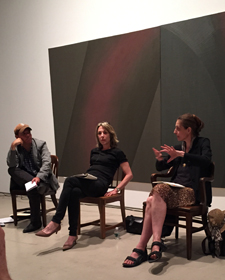 In the late 1960s, Nickas claimed that Lozano interacted with sculptors and artists who worked with language—Richard Serra, Carl Andre, Dan Graham—rather than with painters. He also positioned Lozano’s work (e.g., depictions of hammers and drills and of shapes with volumetric forms) as masculine—a gendered view that Humphries challenged. “I never knew what that meant,” she firmly stated, noting that nobody calls out men who paint pictures of women for being feminine. Nickas fumbled with a definition of masculinity as portraying toughness and violence and mentioned that Lozano, in her art and writing, had a man’s voice. Koether explained this observation as a symptom of the time. “It’s like really rough sex … all the time,” she said. “It’s brutal—it’s very hard and super desperate.” While Humphries recognizes the “unbelievable force” in Lozano’s work, the artist is also cheeky and, formally speaking, was addressing mainstream issues in American painting at the time, such as mass and scale, in spite of the radical qualities that people usually ascribe to her work.

Nickas was refreshingly skeptical about the performative aspect of contemporary art—he said “there’s not a lot behind it”—but Lozano is the real deal, especially regarding her Wave series of paintings, one of which was completed after fifty-two consecutive hours of work. The real topic of discussion, however, was Lozano’s social relationship to the New York art world and how she integrated social performance into her studio work, which Humphries attributed to the emancipatory politics of the 1960s. Representative works are Dialogue Piece (1969), for which Lozano invited people to her SoHo loft for a conversation whose content would remain private, and Drop Out Piece, for which Lozano withdrew from the art world and eventually left New York, later settling in Dallas to live the life of an acid casualty.

Most contentious was Lozano’s Boycott Piece (1971), which comprised her refusal to speak to women for two months—though apparently the work continued until her death. Tonight’s speakers felt uncomfortable with this resolution, which the curator Helen Molesworth has called “consummately pathological” and “incredibly disturbing,” though they understood how Lozano was critiquing institutional sexism, both within and outside the art world.3 Koether identified the problem of Lozano trying to be more revolutionary than the revolution, and Boycott Piece has affected the way she understands the artist’s entire oeuvre.

Though Koether finds Lozano’s position to be “nonreconcilable,” I can’t help but think of other controversial artists who push moral and aesthetic boundaries, such as Santiago Sierra and Adel Abdessemed. Though their strategies and results are questionable, it’s generally a good thing to see artists like them working with contentious subject matter and pushing liberal attitudes. After all, it was Lozano who wrote “‘SEEK THE EXTREMES, THAT’S WHERE ALL THE ACTION IS.’”4 Nickas more or less accepted that testing limits pushed Lozano beyond painting, and beyond the art world. Humphries said we will never know her reasons for dropping out—especially since, Nickas added, “it’s a world people want to drop into.” Koether postulated that acting crazy and aggressive might be the only way out of an enduring problem of sexism. 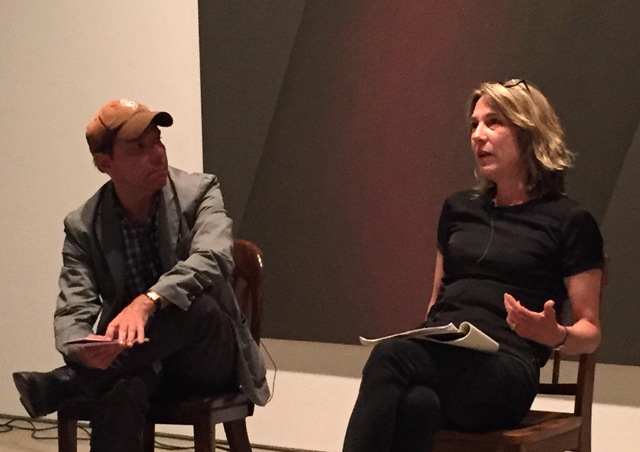 “The visual cues in the paintings are very few,” Jacqueline Humphries said of the paintings on view (photograph by Christopher Howard)

Nickas detected rage, not anger, in Lozano’s work, based on her written statement: “I am not angry at anyone or anything but I feel rage.”5 Koether agreed, seeing rage in the tight control of the paintings hanging on the gallery walls around her. Moments later, during the audience Q&A, an attendee refuted that idea. “One person’s rage is another person’s tranquility,” he shrugged, adding that, when considering the brownish-orange color in one painting, “rust isn’t rage—it’s slow deoxidization.” Koether was unmoved: “I still think they’re very angsty.” Humphries called the paintings austere, not minimal, and Nickas compared Lozano to contemporaneous Californian artists, calling her “the Light and Space artist of darkness.” Humphries concurred, stating that the works on view contain neither air nor figure-ground. Lozano had a sensibility, she continued, not a style; Humphries believes Lozano made works that she wanted to see for herself. Nickas said that one of Lozano’s goals was to “picture time and space, expanding and contracting. It’s improbable, but you just have to accept it.”

2 The Lee Lozano revival can be traced back to an exhibition of her work at the Wadsworth Atheneum in Hartford, Connecticut, in 1998.