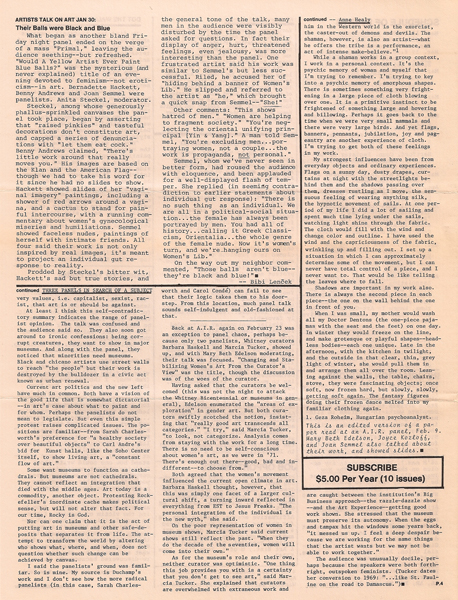 Back at A.I.R. again, there was at last an exception to panel chaos, perhaps because only two panelists, both of them Whitney curators, showed up. With Mary Beth Edelson moderating, their talk was focused. “Changing and Stabilizing Women’s Art from the Curator’s View” was the title, but discussion was about the woes of the curator.

Having asked that the curators be welcomed (this was not the night to attack the Whitney Bicentennial or museums in general), Edelson enumerated “areas of exploration” in gender art. But both curators swiftly scotched the notion, insisting that “really good art transcends all categories.” “I try,” said Marcia Tucker, “to look, not categorize. Analysis comes from staying with the work for a long time. There is no need to be self-conscious about women’s art, as we were in ’71. There’s enough out there—good, bad, and indifferent—to choose from.”

Both agreed that the women’s movement influenced the current open climate in art. Barbara Haskell thought, however, that this was simply one facet of a larger cultural shift, a turning inward reflected in everything from est to Jesus Freaks. “The personal integration of the individual is the new myth.”

On the poor representation of women in museum shows, Tucker said current shows still reflect the past. “When they do the decade of the ’70s, women will come into their own.”

As for the museum’s role and their own, neither curator was optimistic. “One thing this job provides you with is a certainty that you don’t get to see art,” said Tucker. She explained that curators are overwhelmed with extraneous work and are caught between the institution’s Big Business approach—the razzle-dazzle show—and the Art Experience [of] getting good work shown. She stressed that the museum must preserve its autonomy. When the eggs and Tampax hit the windows some years back, “it messed us up. I feel a deep despair, because we’re working for the same things that the artist wants, but we may not be able to work together.”1

The audience was unusually docile, perhaps because the speakers were both forthright, outspoken feminists. (Tucker dates her conversion to 1969—“like St. Pauline on the road to Damascus.”)

1 Tucker refers to a protest of the 1970 Whitney Annual, which demanded that 50 percent of the chosen artists be women. A group of activists, which included Lucy Lippard, Poppy Johnson, Brenda Miller, and Faith Ringgold, scattered “bits of paper carrying their demands, uncooked white eggs, hard-boiled black eggs, Tampax, etc.” inside the museum. See Nancy Spero, “The Art of Getting to Equal,” in The Feminist Memoir Project: Voices from Women’s Liberation, ed. Rachel Blau DuPlessis and Ann Snitow (New York: Three Rivers Press, 1998), 368.

Written by Susan Manso, “The Curator’s Lot” was originally published as “Three Panels in Search of Their Subject” in Women Artists News 1, no. 10 (March 1976): 1, 4; and reprinted in Judy Seigel, ed., Mutiny and the Mainstream: Talk That Changed Art, 1975–1990 (New York: Midmarch Arts Press, 1992). In Terms Of thanks Midmarch Arts Press for permission to republish this review.