They’re Still Out to Get You

They Know Everything about You: Privacy, Security, and Democracy in a Data-Driven Age
Monday, March 2, 2015
New York Institute for the Humanities, New York University, Cantor Film Center, New York

The government has no compelling case for mass surveillance, proclaimed Robert Scheer, a longtime journalist and the editor in chief of Truth Dig. In the predigital days of snooping on the bad guys, he said, “All you needed was a half-sober cop to go sit in a car outside their house and figure out what they’re up to.” American authorities, Scheer continued, were already aware of the Boston Marathon bombers and Charlie Hedbo gunmen before their attacks, and preemptive surveillance by the government is “a betrayal of the American tradition,” to the audience’s applause. He defined this tradition as embracing transparency, honesty, open debate, consumer choice, and the ability to defend oneself within a legal system. 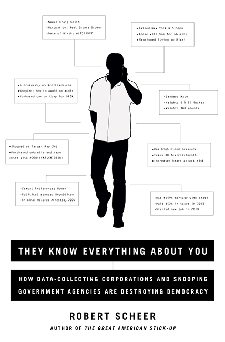 Robert Scheer, They Know Everything about You (2015)

Scheer said that his new book, They Know Everything about You: How Data-Collecting Corporations and Snooping Government Agencies Are Destroying Democracy (2015), whose release was being celebrated tonight, doesn’t attack technology but rather highlights how it is liberating and can save democracy. He feels a sense of loss regarding how technology’s marvelous potential is being squandered. Tonight’s panel, “They Know Everything about You: Privacy, Security, and Democracy in a Data-Driven Age,” cosponsored by the Nation Institute, highlighted how far we have come since the days of stakeouts, wiretaps, and dusty, sloppily transcribed files kept by the Stasi and FBI.

Noticing a chilling effect on free speech and intellectual inquiry online, Helen Nissenbaum, professor of media, culture, communication, and computer science at New York University, explained how the digital surveillance of the online habits of Americans can predict if someone is a Democrat or Republican—a process known as voter targeting. With this information, marketers can influence a person’s political views. This “highly tailored” message, she said, drowns out conversation in the public sphere.

Jen Lowe, an independent data scientist and researcher, argued that complex surveillance develops invisibly and so quickly that regular people can hardly keep up. “We are absolutely having fewer and fewer unobserved moments,” Lowe said. “We are being observed in our homes by our devices.” Advocating informed consent, Lowe pleaded for more “froth and dissent in democracy.”

Edward W. Felten, professor of computer science and public affairs at Princeton University, stated that although algorithmic predictors offer customization and personalization, they serve interests that aren’t your own. “Predictors tend to work best if you’re very much like everyone else,” he said. Felton said that we live like public figures, editing our lives and strategizing our behavior in fear of the consequences of making a mistake.

In an article he wrote in the late 1990s, Scheer remembered observing that “there is no other profit model of any substance” on the internet. “Basically we convinced people that giving up their information would enhance their shopping experience,” he said, “and we didn’t think what it might do to their self-censorship, to their citizenship, and so on.” And until Edward Snowden’s findings were made public, Scheer said, we didn’t know how massive post–September 11 government surveillance had become.

“Where are the protests?” asked Mattathias Schwartz, a staff writer for the New Yorker who served as the panel’s moderator. “Is anyone quitting Facebook?” Felten claimed that individuals “feel powerless to change it.” Nissenbaum said the back end of data mining is complex. People might revolt if surveillance becomes more visible, Lowe offered, but she defended Facebook for being good at community: “There’s value that people don’t want to walk away from.”

Turning back to politics, Felten stated that “we are still far from understanding the implications of the Snowden documents,” many of which, he said, have not been released. He believes the best stuff has yet to come: “That pot will continue to boil for quite a while.” Felten also brought up the recent revelation that American and British forces stole or cracked 2 billion SIM cards, which makes it easy for government agents to listen to calls and rewriting software to turn a smart phone into a recording or tracking device—even when it’s turned off. Scheer argued that technology simultaneously intimidates and seduces the masses. Younger Americans today think the government is benign, he said, but foreign-born students who have personally experienced repressive government regimes see things differently. But, he lamented, “As long as society can disperse the goodies, everything is fine.”

Lowe doesn’t believe in Google’s rhetoric (“do no evil”), and Nissenbaum doesn’t trust “mammoth” companies more than she does the government. Felten said private companies want fences protecting themselves from government surveillance but noted that the feds can always buy data from companies and piggyback on existing surveillance technologies. Scheer somewhat agreed with the three others: “I hate to be reduced to hoping that Google and Apple and Facebook will do the right thing, but I give them a better shot than I do the NSA.” A misuse of data scandal, he conceded, might cause Facebook to collapse. Nissenbaum weighed the traditional right-to-be-left-alone versus the obligation to share information in a social society, but Felten reminded us that citizens freely give their information to data companies. He also noted that observation by surveillance cameras in public spaces, as well as via smartphone locational devices, is a given in society, not a choice.

Scheer warned against collusions between business and government, like when privately held companies such as Palantir and In-Q-Tel analyze and sell data to law-enforcement agencies. “A wall has been breached,” he finished, “between the public and the private sector.” Palantir was founded with CIA money, he said, and the federal agency was its only client for three years. Lowe added that the Chicago Police Department has begun predictive policing, identifying criminals by algorithm and knocking on their doors, basically saying “We’re watching you.” The same police department, it was recently discovered, has been operating a black-site prison and interrogation building. “We’re being sold the story that data is unbiased,” Lowe said, “but it’s not magic either.” We shouldn’t forget about human error and bias.

Schwartz asked about using Tor, PGP, torrents, Tails, and encryption, as well as the judicial system. Nissenbaum reminded us that the government isn’t monolithic; some agencies with good values conduct solid research and take positive action. To help thwart questionable surveillance, she suggested flooding online interactions to obfuscate the system, such as TrackMeNot, which she helped to create. People are more aware of encryption and privacy-enhancing technology, Felten said, and these tools are becoming more practical for ordinary users. “We’re seeing a growth of interest in these things beyond the tin-foil-hat crowd,” he joked. “And that demand is being responded to by, I think, a lot of public-minded researchers who want to try to improve the technical tools.” With hope in the power of the individual, not the corporation, Lowe advocated more education and tutorials for encryption. Deep Lab at Carnegie Mellon University is a new research group that is helping. Scheer said that every government claims to have enemies to justify its actions but implored, “If your cause is right, freedom will serve it.”