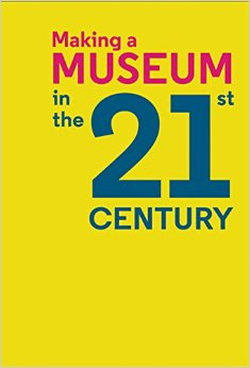 A panel on “The Changing Landscape of Museums Today” coincided with the release of the Asia Society Museum’s anthology of essays, Making a Museum in the 21st Century. Responding to a question asked by Josette Sheeran, president and chief executive officer of the Asia Society—“What does a successful museum look like in the twenty-first century?”—the museum directors Richard Armstrong and Melissa Chiu talked about collections, buildings, and exhibitions, while the bureaucrat Tom Finkelpearl zeroed in on diversity and audience.

The event’s moderator, Peggy Loar, interim vice president for global arts and culture and museum director at the Asia Society, described the mission of the Institute of Museum Service (now the Institute of Museums and Library Services), where she worked from 1977 to 1980. In its early days this federal agency provided grant for general operating expenses. At the time, Loar said, museums were failing because of business mismanagement, low community engagement, and the lack of a clearly defined vision. Those that thrived, she continued, did so because of passion, collecting, education, community, and economic strength. Innovative institutions are built, renamed, reformed, and reinvented, but she wants to know if they are now overreaching. China boasts four thousand museums, Loar told us, with one hundred new ones opening each year. Among the issues in the East and throughout the world are migration, urbanization, demographics, and technology. In other words, the same issues museums have faced for decades.

Richard Armstrong, director of the Solomon R. Guggenheim Museum and its foundation since 2008, surveyed the history of his institution—a presentation he’s probably given many times. The Museum of Non-Objective Painting, the first in today’s global chain, was founded in 1939 in a former car showroom in midtown Manhattan and moved into the Frank Lloyd Wright–designed building twenty years later. Armstrong described how the museum’s namesake founder, Solomon R. Guggenheim, and its first director, Hilla Rebay, believed that “abstract art and its deep contemplation … was the best way to change human behavior,” a socially edifying position with a reformist instinct that Armstrong called “a highly Teutonic idea.” He also noted the foundation’s prescient vision for a networked institution—geographically, that is—with the addition of Peggy Guggenheim’s collection in Venice, which opened in 1949. 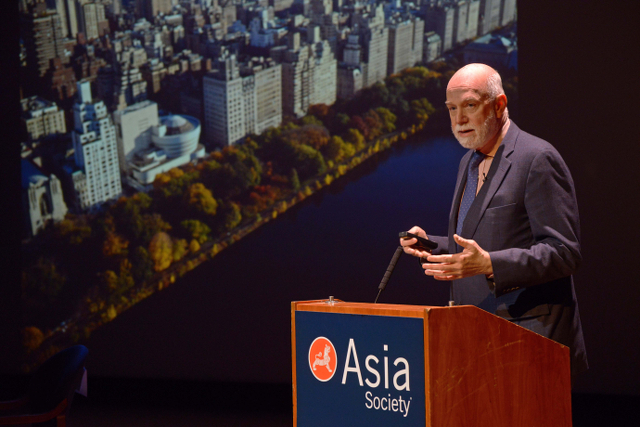 The Guggenheim franchises around the world—operating at various times in New York, Venice, Berlin, Bilbao, and Las Vegas, among other locations—are known not only for their collections and exhibitions but also for their architecture. According to Armstrong, the Bilbao branch designed by Frank Gehry is “the most significant museum building in the second half of the twentieth century,” a claim with which few would argue. He also said the Guggenheim’s buildings have inspired artists to readjust their exhibition practice, as was the case with Richard Serra in Bilbao and Maurizio Cattelan in New York.

Like Armstrong, Melissa Chiu, who left the directorship of the Asia Society last year to lead the Smithsonian Institution’s Hirshhorn Museum and Sculpture Garden in Washington, DC, offered the background for her institution, which she called “the other round building.” The museum’s founder, Joseph Hirshhorn, was a New Yorker who made his fortune in uranium mining. He also collected art in depth, Chiu said, and wasn’t afraid to ask dealers for a discount. The museum bearing his name began with a donation of six thousand works from the Hirshhorn collection; ground broke for the building on the Mall in 1969 and opened five years later. Like the Guggenheim, Chiu said, living artists such as Ai Weiwei and Doug Aitken have responded to the museum’s curved walls; curators have also creatively installed historical works by Yves Klein and Andy Warhol. The museum’s crescent shape even changed the way the photographer Hiroshi Sugimoto presented his own work in other exhibitions, Chiu noted. 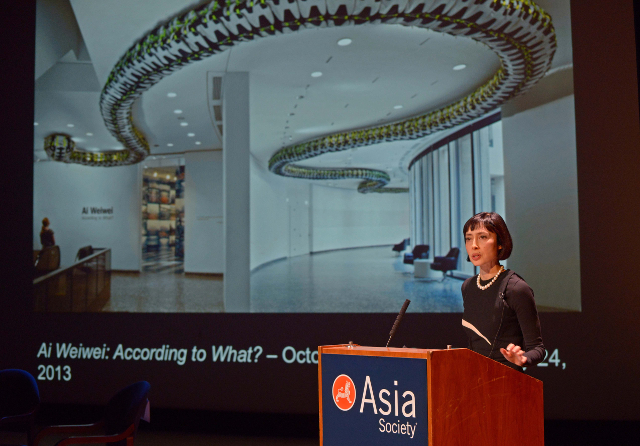 Tom Finkelpearl, who last year was appointed commissioner of the New York City Department of Cultural Affairs, launched into a discussion of diversity, reminding the audience that while New York has a “majority minority” population—65 percent people of color, he said, depending on how you count Latino—over 90 percent of museum visitors and workers are white. When Finkelpearl began his twelve-year stint as director of the Queens Museum in 2002, he realized that nobody on the “upstairs staff” or in its circle spoke Spanish or Mandarin as a first language. Since Corona and Flushing, the museum’s adjacent neighborhoods, are overwhelmingly Latino and Asian, this was a problem. “What did it mean,” he asked, “to have a staff that couldn’t even literally communicate” with its immediate constituency? As a consequence, Finkelpearl reorganized his major departments, making public events and community engagement as important as educational and curatorial programming. And instead of hiring museum experts for the new roles, he solicited professional organizers trained in “interactive, participatory community building.” 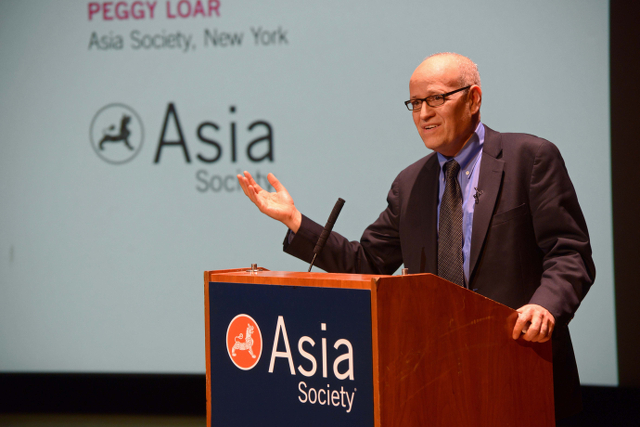 Stating the lack of black leadership in American museums, Finkelpearl advocated a closer look at the pipeline of PhD students that are future institutional leaders. People tend to hire those that mirror themselves, he said during the audience Q&A, but the Queens Museum made a “concerted effort from the top” to generate a diverse group of finalists for jobs (over 50 percent were people of color). While Finkelpearl praised the advances women have made into the top positions at many museums, he indicated that we still have a long way to go.

From the Ground Up

Opening the discussion among the panelists, Loar said that Guggenheim expansion projects have been controversial. (In fact, the architect and critic Michael Sorkin has called the practice “Starbucks museology.” How does the board make decisions for expansion, she asked. Armstrong said he meets franchise seekers about once a month, but the proposals are not always feasible. And Helsinki is the only proposal he has been involved in since its inception, he explained, noting that the Finnish capital had four advantages: a proximity to Russia, technological capacity, leadership, and economic need. About 1,700 architects entered the open call for a Helsinki building, Armstrong said, and six finalists were chosen to advance. An exhibition will present their work to the public and then politicians cast their vote—“That’s the mechanics of how the decision gets made.” Armstrong didn’t have much to say about criticism for the Abu Dhabi branch, a work in progress that the group Gulf Labor has been monitoring and protesting.1

Loar asked the three panelists about private museums with limited public agendas, an issue recently explored in a New York Times article on art collectors who establish their nonprofits and foundations, often on property adjacent to their home or office, and receive tax exemptions for the housing, maintenance, and conservation of their private art collections. “I think the problem goes back to about the twelfth century,” Armstrong joked. Not all new museums will survive, he continued, and personally wished the Guggenheim were less expensive for visitors. (He later disclosed that one-time visitors keep the museum solvent, but local audiences—about 40 percent of the total—are a “more sensitive type of plant” that must be engaged differently.) Though Armstrong acknowledged that we live in a gilded age, he felt—quite inexplicably to me—that “it’s not good for people like us who like art to be criticizing collectors.” Chiu claimed that single collectors who founded institutions, like Hirshhorn, were interested in the public good. “It’s an evolutionary process” for the private to become public. That doesn’t mean, of course, that we shouldn’t watch these vanity projects like hawks.

Museum growth is predicted for regions outside Europe and North America, with new buildings being erected, Chiu reported, in the Middle East, India, and Singapore. “China is another matter, is it not?” Loar asked. Chiu noted that the culture of American museums—with private philanthropy supporting an entire museum’s infrastructure—is an anomaly in the world. None of the panelists, through, established if the building boom in China is public or private. In places like Shanghai, she continued, it is hard to ignore new museum development because of its large scale and fast pace. China boasts entire cities that did not exist twenty-five years ago, Finkelpearl said, and Westerners are baffled by the cultural planning developed concurrently with other municipal infrastructure. What took 1,500 years to grow in Europe, he said, now happens in 1,500 days.

While Finkelpearl noted how art neighborhoods develop organically in New York, Armstrong claimed that a homegrown arts community isn’t necessary for the success of museums, giving Oklahoma City and Kansas City as examples. Loar added that a sense of local community pride could eventually develop for a new institution. Moreover, museums may follow different models or invent their own. Finkelpearl flipped an audience member’s question about a Vietnamese art museum’s limited resources, arguing that we’re presupposing the West has better museological knowledge and knows the right way to implement it. Instead, he wondered, what can we learn from them?

Armstrong said the Guggenheim is no longer “obsessed with Europe and America” and reiterated his institution’s commitment to Asian art, mentioning a few recent exhibitions, such as shows of the work of the Indian artist Vasudeo Santu Gaitonde and the Chinese artist Wang Jianwei. The Guggenheim, he noted, is also actively buying the work of artists from across the United Arab Emirates for the Abu Dhabi branch. In her own backyard, Chiu said that two of the Hirshhorn’s five curators are Asian: Melissa Ho and Mika Yoshitake (who organized the excellent survey on the Japanese avant-garde group Mono-ha for the Los Angeles–based commercial gallery Blum and Poe in 2012). At her museum Chiu wants to place Asian art in a broader story of modern art, beyond New York and Paris, since art movements in the 1960s and 1970s were “truly global.”

Learning, access, and social justice are important museum issues for the next decade, according to one audience member. Finkelpearl agreed, saying that Mayor Bill de Blasio’s administration has budgeted $23 million to improve a lagging arts education in New York, which includes an infusion of art, dance, music, and theater teachers. Tourism is also important to the city, he acknowledged, but then quipped, “How many people got into the arts because it was going to be good for the economy?” The audience laughed, of course. Seriously, though, Finkelpearl meant to emphasize how government has an inherent interest in community, and the mayor has even commissioned a major study to measure the impact of the arts. 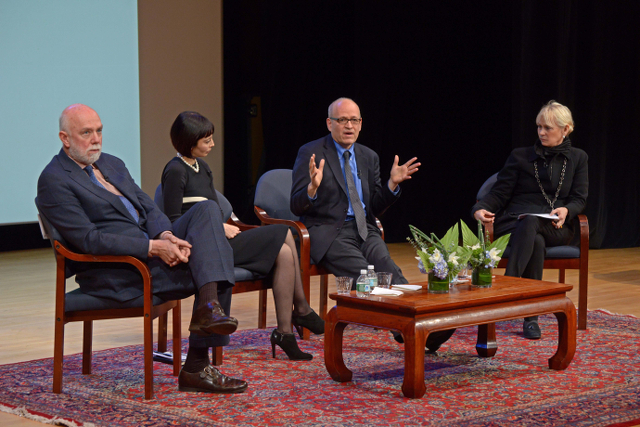 The idea of a shift in art museums—and in culture at large—from object to experience was folded into a conversation about museum education. Finkelpearl said that a focus on experience doesn’t abandon collections, scholarship, and connoisseurship but rather indicates a fuller recognition of the people who visit museums. “That’s [traditionally] been the purview of the education department,” he said and boldly proposed that “the avant-garde in museums is shifting to the education departments,” where warm, inviting teachers are eclipsing the authority of gatekeeper curators. That sounded nice, but I would argue something different: artists and curators have been cannibalizing education departments, making the pedagogical turn their own “unique” contribution to art and museums.2

While the blockbuster exhibition—from Treasures of Tutankhamun (1976–79) to The Art of the Motorcycle (1998–2003) to Star Wars: The Magic of Myth (1997–2003)—occupied the minds of many museum professionals at the close of the twentieth century, the subject surprisingly did not come up during tonight’s event. None of the panelists spoke about digitizing their collections and putting high-resolution images online for free academic use, nor did they discuss the ethics of improper deaccessioning, when museums sell works from their collections to fund operating expenses—a practice prohibited by both AAMD and the American Alliance of Museums.

Armstrong, Chiu, and Finkelpearl are all figureheads who, as current and former museum directors, are experts at abstraction and delegation. Both granular details of running a museum and specifics about current projects aren’t easily conveyed in forums the one tonight, so the audience received sweeping overviews of the twenty-first-century museum landscape. Nevertheless, it was valuable to know what issues these figureheads felt were important enough to discuss.

The Asia Society has posted the video of “The Changing Landscape of Museums Today.”