This essay is the second of three that reviews a recent symposium at the Jewish Museum. Read the first and third texts. 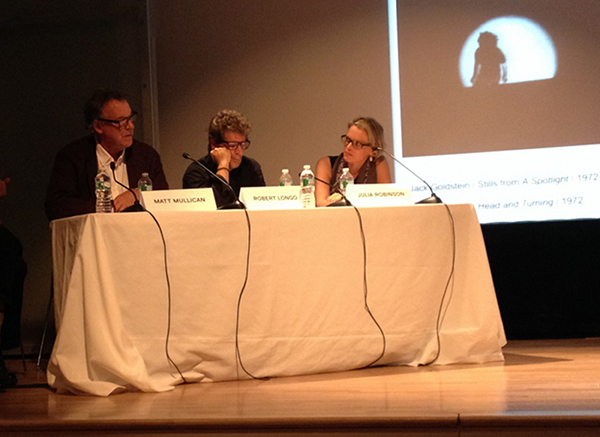 A picture of the panel (from left): Matt Mullican, Robert Longo, and Julia Robinson (photograph by Christopher Howard)

Following the symposium’s keynote presentation, the first panel featured two figures from the highly influential Pictures Generation—the artists Robert Longo and Matt Mullican—along with Morgan Fisher, a substitute for the absent Troy Brauntuch. The panel’s moderator, Julia Robinson, assistant professor of art history at New York University, introduced the speakers and loosely moderated a discussion on their personal and professional experiences with the artist Jack Goldstein (1945–2003), the subject of a retrospective at the Jewish Museum.

Mullican had met the artist in the early 1970s at California Institute of the Arts, known as CalArts, where Goldstein was a graduate student and the teacher of a poststudio class in which people sat around and weren’t required to make art. Mullican recalled a time when he, his classmate James Welling, and Goldstein ventured into the desert to make earthworks. Another time, on campus, Goldstein buried himself but not before connecting the cord for a blinking light between his makeshift coffin and the surface above him, giving viewers on the ground the status of his heartbeat.

Performance art from the 1970s was different from that of the 1960s said Robinson, stating the mundane. Longo illuminated the thought by declaring that the form of one generation is the content of the next. His group of artists—the Pictures Generation—looked at photographs of performances, such as those published in art magazines, and thus made photography the subject of their work. This key observation was left hanging here but picked up later. First the panel paused so that Goldstein’s newly discovered black-and-white film Head and Turning (1972) could be screened. For seven or eight minutes the camera focused on the artist’s deadpan face, from chin to brow. He turned his head as an unseen person walked around the room and around him, his or her footsteps echoing loudly. The film was idle and monotonous, but would you expect anything else from documentation of 1970s performance art? 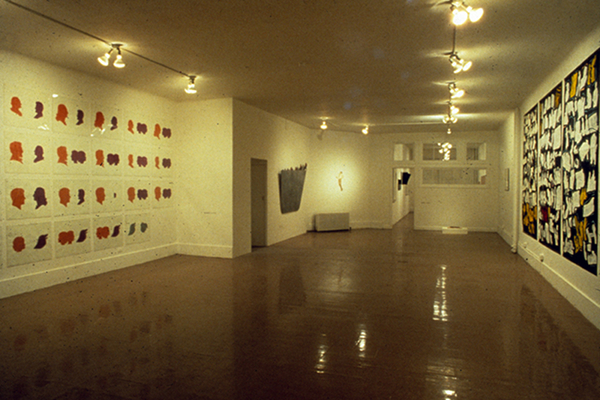 Installation view of Pictures at Artists Space in 1977

Back to the conversation. While attending a “mediocre art school”—Buffalo State College—Longo made a little money drawing portraits in bars and also met girls that way. His more lasting contribution was his founding, in 1974 with fellow students and artists, of the exhibition space Hallwalls, located in the corridor between his studio and that of another artist, Charles Clough. This opportunistic group pored through art magazines and, with help from academic funding and emergency grants, invited people from New York—stars like Vito Acconci, Sol LeWitt, Lucy R. Lippard, and Richard Serra—to visit, give talks, and make work. The CalArts Mafia, which comprised Goldstein, Mullican, Welling, Brauntuch, and David Salle, among others, were introduced to the Hallwalls scene by Helene Winer, director of Artists Space, herself from Southern California. Among the last Hallwalls shows in Buffalo before the exodus of artists for New York in 1977 showcased the mafia.

Once in New York, artists from CalArts and Buffalo faced a formidable problem: the legacy of Minimal and Conceptual art. What could they do if everything had been done, dismantled, and exposed? Contemporary art “was toast,” Mullican declared. “It was done.” But he soon found liberation and an even more confounding situation, realizing “you didn’t have to worry about the object, but when you worry about the subject you worry about the world.” Longo saw it slightly differently: the previous generation of artists “built this hot rod that we could drive.” That hot rod took off in September 1977 with Pictures, the generation-defining exhibition organized by Douglas Crimp and held at Artists Space. Although the show displayed the work of five artists—Longo, Goldstein, Brauntuch, Sherrie Levine, and Philip Smith—Longo said that many others doing related work, such as Mullican, Salle, Richard Prince, and Cindy Sherman, could have been included. Alas, the gallery had an equitably policy that prevented the same artist from showing twice. 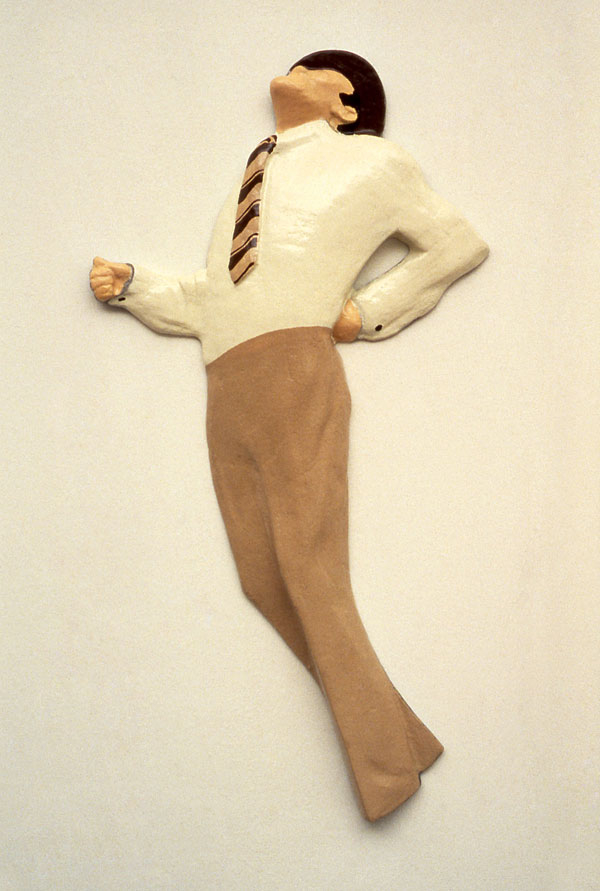 The panelists touched on Goldstein’s films and records. Longo remembered having intense conversations with the artist while in the cutting room, where Longo edited and compiled his friend’s films. Mullican noted that traditional structuralist films were essentially essays on film, but Goldstein’s work was sculptural, that is, he produced “nonnarrative objects.” They were also physical experiences: the act of slipping a disc from its sleeve and placing it on the turntable. “Ghost images,” Mullican called the visions the records induced. Longo described the records as being like dreams. “Jack recognized the monumentality of clichés,” he said, referring not to the records but to films like Metro-Goldwyn-Mayer (1975).

Longo discussed the still from a Rainer Werner Fassbinder film that he used to make several breakthrough works, such as a painted aluminum wall relief called The American Soldier (1977), which Crimp included in Pictures, and a multimedia performance at the Kitchen called Sound Distance of a Good Man (1978), ideas for which Longo admitted he freely stole from Goldstein. Ah, appropriation! To his credit Longo acknowledged his debt to the professional illustrator and his longtime collaborator, Diane Shea, whom he hired several decades ago to help with his drawings because his ideas were moving faster than he could personally execute.

Longo believed that Goldstein’s paintings from the 1980s, which he was not crazy about, were influenced by the Buffalo scene but also claimed that Brauntuch may have been the greatest influence on Goldstein. Longo started talking about the drugs everyone did back then. In an attempt, I think, to interrupt or distract him, Robinson began incessantly flipping through PowerPoint slides, trying to find examples of Goldstein’s work from the 1980s. Drugs are always great at the beginning, Longo said, before calling on the artist Ashley Bickerton, sitting in the audience, to talk more about the subject. Bickerton didn’t take the bait and instead discussed Goldstein’s aspiration for perfection in his painting, which was incredibly hard to achieve. Longo has been sober for twenty years—maybe others aren’t or just aren’t talking about it.