An Influx of Influences 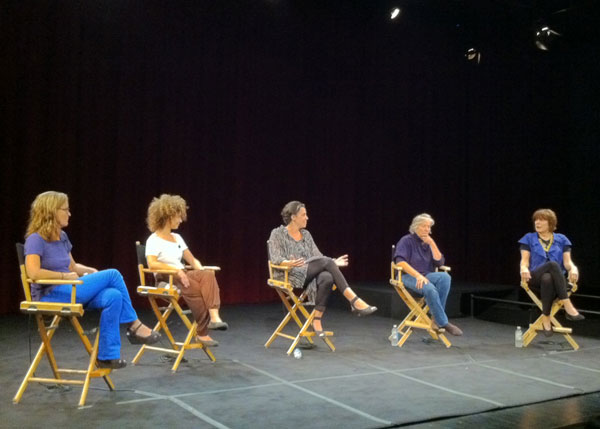 The panelists, from left to right: Suzanne McClelland, Mika Rottenberg, Lindsay Pollock, Judy Pfaff, and Marilyn Minter (photograph by Michael Grant and provided by the School of Visual Arts)

Influence is a tricky, elusive thing. The organizers of an exhibition at the Visual Arts Gallery in Chelsea, Amy Smith-Stewart and Carrie Lincourt, confront the topic as it related to BFA and MFA graduates from the School of Visual Arts in New York. For The Influentials, the two curators selected nineteen women artists, among them Inka Essenhigh, Kate Gilmore, and Yuko Shimizu, who chose a second artist whose work has had a significant impact on their own. Many named their former professors, such as Jeremy Yoder, Thomas Woodruff, and Thomas Lanigan-Schmidt. Aïda Ruilova selected the French cult-film director Jean Rollin; Amy Wilson, Riot Grrrl; and Phoebe Washburn, her grandmother. While the unique curatorial premise sheds light on networking and support, on influence and mentoring, the visual or conceptual connections between pairings of artists are not always evident and, when they are, sometimes feel forced. But such discrepancies are, of course, the nature of group exhibitions with loose themes.

A panel discussion that brought together two sets of mentors and mentees from the exhibition—Mika Rottenberg and Marilyn Minter, Suzanne McClelland and Judy Pfaff—attempted to elucidate these connections, to some success. Sitting onstage in director’s chairs facing the half-full house, the artists agreed that influence is a good thing. They love to devour the history of art, especially by going to museums, and don’t mind having that stimuli follow them into their studios. McClelland said she never felt pressure to do the “resistance dance” when it came to her teacher, Pfaff, who had immediately recognized a gifted student whose “rough and tumble” style evoked a female Sigmar Polke. Originally a talented painter who studied under Minter, Rottenberg considered anything to be an influence, even a “stain on the floor.” She’s also generally unaware when an influence from the “big salad in my head” bubbles up in her work. During the evening’s conversation, though, neither the audience nor the moderator, Lindsay Pollock of Art in America, asked the artists if they minded others’ comparisons to other artists in conversation or in print. 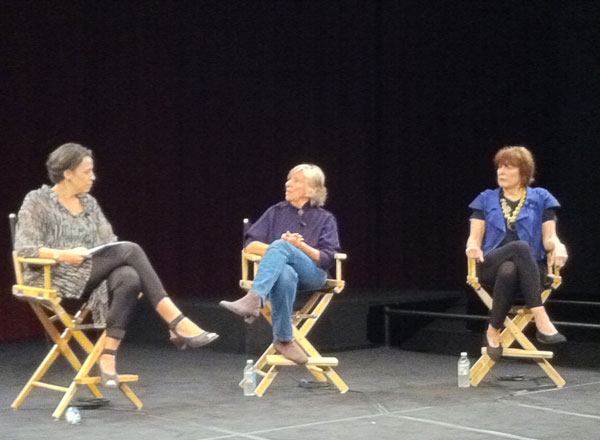 A teacher since 1986, Minter styles her pedagogical practice at SVA by helping her students to tug threads. She also prefers group discussions to one-on-one encounters, to help establish communities that last beyond graduation. With forty years’ experience, Pfaff wields her influence not with a sword but with easygoing humor, encouraging mischief at Bard College, where she has worked since 1994. Neither Minter nor Pfaff said she models her teaching after her male instructors. As students themselves, both were the only women in their respective classes, and the only nonmale artists whom Pfaff remembers studying were Mary Cassatt and Barbara Hepworth. Related, Pfaff and McClelland admired the late Elizabeth Murray as a friend and mentor. Pfaff said that she finally found in Murray’s work a model of art making that broke from her training with Al Held at Yale University.

The panel presented a great mix of personalities, with the spirited Pfaff and Minter providing the yuks and zingers. In contrast, Rottenberg acted goofy and aloof, and McClelland was reserved but not reticent. As the moderator and questioner, Pollock failed to capitalize on these diverse strengths, instead tossing softball questions to the artists, who swung at them with answers that often lacked concrete details or specific anecdotes. Thus the audience received biographical information and generalized statements, such as when, near the end of the talk, Pfaff groaned about how theory exhausts her, which led to inane comments from the panelists about how younger artists must now articulate their art as well as make it. Minter saved the day with a bit of sage wisdom—“Art is an unmeasured intelligence”—but the evening would have benefited from discussions about specific works, situations, exhibitions, and the like. 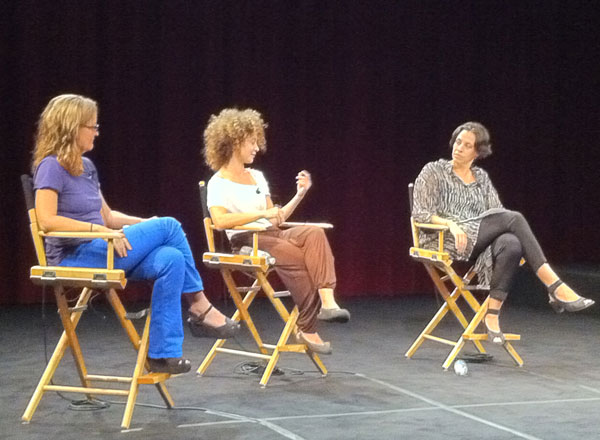 Mika Rottenberg speaks to Lindsay Pollock, with Suzanne McClelland listening (photograph by Michael Grant and provided by the School of Visual Arts)

Not all responses were trite or uninteresting. At SVA in the late 1980s, McClelland was different from the other students: she was divorced and raising a four year old. Rottenberg stammered when Pollock asked about the female imagery in her videos. (Did Pollock mean to say “characters”?) The artist called herself a feminist, so her feminist lens must be transparent, a given. (From the interviews in the exhibition catalogue, no artist was under the illusion of living in a postgender world.) Minter talked about her infamous series of pornographic paintings, for which the art world excoriated her when she exhibited them in 1989. “Nobody has politically correct fantasies,” she exclaimed, exasperated that folks back then wanted answers from her about this tainted imagery, even though she was only raising the questions. Of course, it’s been increasingly hip since then for artists and curators to pose questions without proposing solutions. Minter and Rottenberg brought up two other artists, Laurel Nakadate and Tracey Emin, who are despised for making work with brazen sexuality. 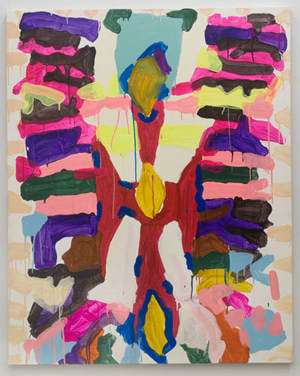 The conversation drifted to dealers, especially women dealers, as three of the four artists have them. Rottenberg thought it was okay for them to bring their emotions to work. Minter offered this: “I don’t think dealers are regular people.” She and Pfaff both agreed that “dealers are not your friends,” even though they might act motherly, as someone inferred a few moments before. Minter noted that powerful male dealers often intimidate her professional representative.

The panel offered no final word on influence, just informal conversation on different aspects of it. Perhaps influence cannot be encapsulated in such a format, or even in an exhibition, despite the remarkable work in The Influentials, including Pfaff’s stunning multimedia wall sculpture, Underbelly (2010), and Katherine Bernhardt’s acrylic painting, Untitled (2011). I would argue that influence manifests itself privately, through challenging talk between teacher and student in the classroom or among colleagues over dinner or drinks. Or individually, working alone in the studio or standing in front of, and taking in, a great work of art.

Benjamin Sutton wrote a review, “Feminism, Forced Painting and Formative Teachers at SVA Panel,” of the same panel for the L Magazine.