Art after Institutions after Art

This essay is the fourth of four that reviews a recent conference at the New Museum of Contemporary Art. Read the first, second, and third texts.

For the final panel of the Museum as Hub Conference, called “Institutions after Art,” the moderator, Taraneh Fazeli, education associate at the New Museum, wanted to explore institutional programming, alliances, content, context, and power dynamics, not just the status of structures that support artists. The Museum as Hub has supported exhibitions as a coproducer. What else can noncuratorial departments, independent groups, and nonprofit organizations do?

The Brooklyn–based Triple Canopy is both a magazine and an editorial collective, stated one of its members, Alexander Provan. Since 2007 it has assisted writers and artists with projects specific to the web but now works in the “expanded field of publication,” which includes the internet, printed books, discursive spaces, and the public surrounding those activities. Comprising about fifteen to twenty workers, Triple Canopy started, Provan said, when institutional support for this kind of publication became standard. Although an independent nonprofit organization without a parent organization, Triple Canopy has recently partnered with larger museums, including MoMA PS1. A book called Corrected Slogans: Reading and Writing Conceptualism, for instance, was commissioned to accompany an exhibition called Postscript: Writing after Conceptual Art at the Museum of Contemporary Art in Denver, Colorado. The collective hosted a series of conversations at its headquarters in the neighborhood of Greenpoint about the “legacy of conceptual art in relation to contemporary poetics,” turning the resulting audio recordings into heavily annotated transcripts that were published in a special issue of the magazine that was also accessible in the Denver museum via QR codes. 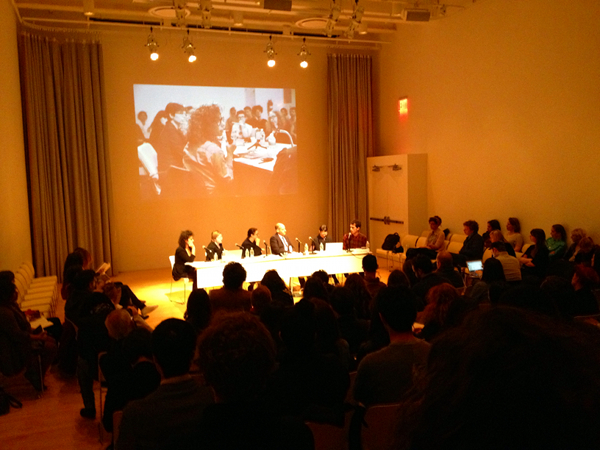 Installation view of “Institutions after Art” (photograph by Christopher Howard)

Michelle Marxuach, cofounder and codirector of Beta-Local in San Juan, Puerto Rico (and a member of the Museum as Hub Conference’s first panel), described a project from ten years ago, when artists worked with others to build a “temporary city” that produced workshops, built and maintained a garden, boardwalk, and cinema, and created mosquito-free zones, and more. After completing this she questioned her future: “What do I do next? Do I want to keep working in the art field? And if so, what infrastructure do we want to build? Why do we do what we do?” It took her five years to arrive at her next project, a partnership with artists that emphasized “deschooling” and sharing knowledge and skills.

Omer Krieger, artistic director of Under the Mountain: New Public Art School School in Jerusalem, Israel, paced the room with a handheld microphone, talking about the plight of the “state artist” who has worked, to cite a few of his examples, with a fire brigade in Israel, the local German police, and the former Polish secret service in such a way that a government body becomes a medium or material for making art. Krieger’s rambling delivery was hard to follow and the man occasionally evasive (“What is new public art? You can ask later.”). His presentation projected on the large screen behind him was hard to read.

The artist Tania Bruguera translated the preposition “after” from the panel’s title into Spanish in two ways: detrás de means “literally going after something, so you can catch it,” and despues de is to follow after something, in sequence. Are institutions trying to catch up with art production, she asked, or do they arrive when the art’s already finished? Noting the discrepancy between artists and other donors in an acknowledgment list on a wall in the New Museum’s lobby, Bruguera urged the museum to return to its roots of serving artists’ needs, as well as to diversify its board to include a sociologist or an artist who pushes aesthetic boundaries. These people, she argued, may not donate money but could instead offer expertise and knowledge. For her, institutions are ideological, but Americans, she claimed, are uncomfortable talking about ideology. In sum, she seemed to say, the New Museum is woefully detached from its history.

A few years ago Bruguera wanted to create a political party for immigrants using the “institution as form” for a commission from Creative Time, whose lawyers claimed the idea would close the organization. Her modified project, Immigrant Movement International, based in Queens, New York, has evolved into a community space, laboratory, and think tank for producing slogans, manifestos, activist tactics, and propaganda, with members working locally in cells. Bruguera does not emphasize the theory and history of art but rather teaches how art can be used, which is related to a side project called Arte Útil. The participants—often stay-at-home moms—learn English through art history and gender politics. At the conclusion of the class, everyone went to the Metropolitan Museum of Art, so that they were not frightened or intimidated by museums. Bruguera boasted that her best work is invisible, uncollectible, and unauthored, such as a document of cultural rights and freedom of speech that she had been drafting with twelve other people for the United Nations.

For Annie Fletcher, a curator at the Van Abbemuseum in Eindhoven, the Netherlands, writing an institutional history is a good way to demonstrate transparency, a sentiment that echoed her talk during the previous day’s panel. Fletcher’s experiences working with Bruguera, whom she brought to her institution for a collaborative project, raised a discursive question that all the panelists took up: “What does it mean to museify?” They agreed that placing objects in museums can create or consolidate a certain history—for better or worse—and that the institution as a “history-making machine” can collect and display works from both aesthetic or political movements. They also fretted over presenting material outside the original context, whether that be documentation of a performance, a painting that was originally an altarpieces hung in a church, or a protest sign from Occupy Wall Street.

Museums, however, are not monolithic in their treatment of objects, and many (such as the Van Abbe) want to change this treatment. Fazeli asked the panelists: What offers of support make you more willing to work with an institution, and have you refused to participate with one? Bruguera said that the Queens Museum of Art, which helps to administer Immigrant Movement International, is flexible. Through her work at the Van Abbe the Tate invited her to discuss “collecting activism,” a topic that she, the other panelists, and the audience found problematic. Bruguera said she asked Tate employees, “Are you guys willing to become an activist institution” with money going to the right cause? The institution was ambivalent.

Provan commented that it can be hard to discern genuineness when large institutions begin to involve themselves in advocacy work, whether by collecting certain kinds of objects or by getting involved in other ways. A big museum operates on a larger scale, which carries the danger of losing focus or becoming abstract. The small scale of Triple Canopy allows it to serve the organizers themselves and also an interested public.

During a half hour of meandering comments during the Q&A session, Krieger floated the idea, to murmurs of laughter, of museums worldwide showing no objects for a year. Fletcher said that a program asking what it means to be Dutch could grow into ways to effect political activities. One person in the crowd wondered about the fetish power of branding, perceiving the Immigrant Movement International website as mimicking the designs of museum and corporate website. Bruguera said this was intentional: her goal was to “imitate” other institutions, to be slick and not handmade. Besides, she said, her audience is neither the art world nor politicians. For her, creative knowledge plus practical knowledge equals political knowledge.

Natasha Marie Llorens, a curator and writer based in New York and a doctoral student in art history at Columbia University, has written a critical analysis of the full conference for Six Degrees, the New Museum’s blog, called “Museum as Hub: Comparing Fictions.”