How Does It Feel to Feel?

This essay is the first of four that reviews a recent conference at the New Museum of Contemporary Art. Read the second, third, and fourth texts.

A focus on inventive educational programming in art museums is decades old, as Michelle Jubin has brought to light in her essay “Museum Education and the Pedagogic Turn,” but the recent intensive focus on it—especially in relation to curatorial authorship, relational aesthetics, and social practice—has produced a new class of cultural workers that focus on the intersections of art, learning, technology, and the public. Together with social media, marketing efforts, and other forms of audience engagement (such as parties for young adults staged under the “First Fridays” or “Third Thursdays” rubric), such changes have permanently reshaped the role of the museum.

The two-day Museum as Hub Conference celebrated the sixth anniversary of the New Museum of Contemporary Art’s innovative program and also pondered its future. Founded in 2007 and coinciding with the opening of a new building, Museum of Hub was designed to share resources, such as exhibitions, staff, artists, programming, digital projects, and more, among smaller and like-minded international institutions of contemporary art. Since collaborations of this type—part of the pedagogical turn that presents classes, workshops, panels, and other types of discussions alongside exhibitions—have become common in art institutions across the globe, increasing in visibility, respect, and importance, what new, unexplored directions should museum directors, curators, and educators take?

The conference organizers considered four general topics on which to base or frame the discussions. The first of four panels—called “How Do You Feel (about Institutions)?”—comprised all women and was moderated by Johanna Burton, an art critic, former academic administrator, and currently Keith Haring Director and Curator of Education and Public Engagement for the New Museum. Each of the five speakers briefly described their institutional role before having a group conversation on the panel’s topic.

After slinging a banana over her microphone, the perky, vivacious Sarah Rifky, codirector of Beirut in Cairo, Egypt, said that we remember stories better than institutional facts, according to a short article she was reading that morning. The focus on feelings interested her greatly, because people are allowed to expressed emotions but institutions are not. “Is the New Museum depressed?” she wondered. “Is MoMA manic?” Immediately after speaking she unpeeled and ate her banana.

Michelle Marxuach, cofounder and codirector of Beta-Local in San Juan, Puerto Rico, also liked how the panel emphasized emotions, especially as they relate to agency within an institution. The title reminded Naomi Beckwith, curator for the Museum of Contemporary Art, Chicago, of Andrea Fraser’s essay “Why Does Fred Sandback’s Work Make Me Cry?” from 2006, in which Fraser compared psychological explanations for weeping to her own emotional responses to works of art, all through the now-misty lens of the institutional critique for which Fraser is known. Beckwith then described a program for teens at her museum that addresses the problem of making museums more comfortable. She also gave a biographical anecdote about her professional path: she grew up in Chicago, attended museums every week as a child—mostly focused on science and technology—and consequently grew comfortable in these institutional spaces.

Eungie Joo, director of art and cultural programs at Inhotim in Brumadinho, Brazil, proudly announced that her institution is teaching local musicians and bands how to apply for government grants to support themselves. Because Joo was director of Museum as Hub for about five years, the conference was in part be assessing—and perhaps even critiquing—her legacy at the New Museum. The fifth panelist, Hyunjin Kim, chief curator for the Ilmin Museum of Art in Seoul, South Korea, did not have an institutional legacy. As an independent curator for ten years who spent her energy working with underground culture, she had just joined her museum ten days earlier.

Beginning the conversation portion of the panel, Burton expressed interested in comfort and discomfort, in how institutions effect not only feelings but also bodily sensations. For those schooled in criticality, like she was, discomfort is the normative or default position. Yet comfort has a critical nature, she said, in addition to its entertainment value. Joo is also interested in comfort, alienation, and rigor. She does not believe in accommodating the lowest common denominator or dumbing down perspectives. Marxuach wanted to hurdle a dialogue about comfort and discomfort to get to passion, and to get to practical matters concerning getting stuff done. Rifky burst out with joy—she wants to take everyone’s thoughts and sit under a tree with them. She loves poetry, song, stories, and fun. 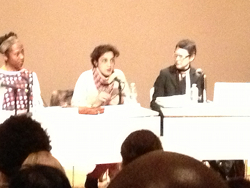 Burton wondered how the history of an institution meets the expectations of its staff. She once worked for a small organization in which each worker had a director-level position—no one person served under another. Marxuach also challenges authority with flexibility at Beta-Local, whose staffers change their job titles to fit a specific need or request. Beckwith asked if an institution comprises the group of people there, or if the programs within an institution change with the people who run them. The Studio Museum in Harlem, where she had been an associate curator, has a narrow mandate—to present art by the people of African descent or about black culture—that then spreads or grows but does not stray. Although a “majority museum” like the MCA in Chicago has a broader mission, upon being hired she was expected to continue on a similar professional path.

Yet it’s possible to reinvent an institutional mandate from place to place. “Sustainability is overrated,” Rifky quipped. Some trees will die, she explained, while others will live forever or be moved elsewhere. Turning Rifky’s phrase into a meme, Joo joked that, when considering biennials, “permanence is overrated.”  Beckwith believes that the museum has become the agora, the body politic, to which Rifky cheekily countered with “democracy is overrated.”

Burton stated that infrastructure is a problem, and that no infrastructure is a problem. Indeed, Rifky recounted a recent trip to Yemen, where no formal art institutions exist. Beckwith recalled that for her first show at the MCA, an artist looked for architectural quirks in the boxy building to respond to—and found none. Yet institutions still offer, according to Burton, the “pleasure and promise of doing our work.” Even though she does not identify as being a hopeful person, she feels that places where ideas and structures encounter a “misalignment” or “malalignment” are places where exciting stuff can happen.

Natasha Marie Llorens, a curator and writer based in New York and a doctoral student in art history at Columbia University, has written a critical analysis of the full conference for Six Degrees, the New Museum’s blog, called “Museum as Hub: Comparing Fictions.”