This essay is the third of four that reviews a recent conference at the New Museum of Contemporary Art. Read the first, second, and fourth texts.

“Networked Institutions/Institutionalized Networks” sought to shed light on the dynamics of collaboration among institutions—now considered a common way of working in the art and museum worlds—that may have become obscured. Should networks increase an individual’s productivity? Is a network altruistic? Can schemata such as Alfred H. Barr Jr.’s famous diagram of the evolution of modern art, the research-based work of Mark Lombardi, and the politically oriented wall drawings of Dan Perjovschi be considered networks? The panel’s moderator, Ryan Inouye, assistant curator of the Museum as Hub at the New Museum, asked his speakers to be concrete, to bring one example to discuss, but the ensuing discussion was highly abstract and difficult to follow.

Jay Levenson, director of the International Program at the Museum of Modern Art in New York, talked about the Post, an eight-week-old blog that is part of a program called C-MAP: Contemporary and Modern Art Perspectives. At present C-MAP focuses on art from large parts of the globe: Eastern Europe, Latin America, and Japan, China, and Korea. The goal of his project, which scans and disseminates art-historical documentation, is to reach nonmuseum scholars, to expand knowledge, and to enhance the collections of the participating institutions. The website describes Post as an “online journal, archive, exhibition space, and open forum that takes advantage of the nonhierarchical nature of the Internet [that] seeks to spark in-depth explorations of the ways in which modernism is being redefined.” Sounds terrific. 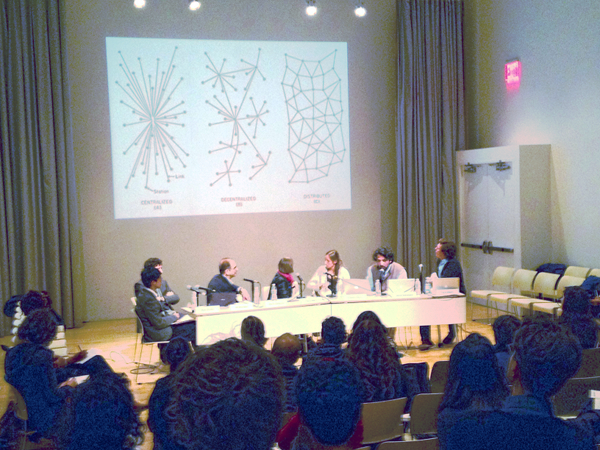 Dóra Hegyi, a curator and art historian from Budapest, Hungary, talked about tranzit.hu, which has contributors who work independently. I don’t recall her explaining what this project is or does, but she did express that contemporary art and culture produces an excess of knowledge for its context and said something about seminars and speakers. Daniela Pérez, cofounder of de_sitio in Mexico City, described her institution as an artist residency and an apartment where individuals and organizations produce work together quickly, sometimes starting on a project before meeting there in person. For her, a network is building connections, giving and taking, and sharing tangible and intangible benefits. Pérez’s tag cloud of words included: collaboration, cooperation, interests, agenda, common goals, generosity, dialogue, materialization, processes, contexts, critical, and practice.

Ashok Sukumaran of Pad.ma (an acronym for Public Access Digital Media Archive) in Mumbai, India, spoke about crossing boundaries and borders, ambushes and surprises, having no walls or lines, nodes and infrastructure, and the difficulty representing a network. Pad.ma is an online archive of digitized public-domain films and videos—often unfinished and unedited works—and their corresponding metadata. Sukumaran talked about projects with lawyers and Berlin filmmakers and randomly asked “Why are there no good films about the internet?” He could probably conduct a quick Google search to find out.

Nick Aikens, an assistant curator at the Van Abbemuseum in Eindhoven, the Netherlands, wanted precise definitions of the terms network, hub, and collaboration. I agree: it seemed that the panelists and audience members possessed this knowledge—but in highly idiosyncratic ways. Aikens felt that a network is opaque about authorship and control but did not elaborate on this idea. How do we move beyond network to coproduction, he wondered? Aikens provided a summary of the Internationale, a confederation of large and small European universities and museums that received a three-year, €1.5 million grant to begin operations. The project, now extended to five years, consists of sharing collections, resources, staff members, and archives. One goal when the group seeks new partners is to avoid duplicating resources. That’s a good idea.

To start the Q&A session, Inouye asked the panelists about funding, use, and support for their projects. Sukumaran said that the people who originated Pad.ma no longer contribute, which was not perceived as negative. The life of a project ought to outlive the founders—which was the very reason why the New Museum was holding this conference. An audience member stated that the offline part of a hub can be more important than the online component, which is generally true but not always.

My handwritten notes for “Networked Institutions/Institutionalized Networks” were surprisingly incomplete. Since the New Museum did not post the video of this Museum as Hub Conference panel, like it did for the three others, I was unfortunately not able to revisit what each participant discussed in greater detail.

Read Natasha Marie Llorens, a curator and writer based in New York and a doctoral student in art history at Columbia University, has written a critical analysis of the full conference for Six Degrees, the New Museum’s blog, called “Museum as Hub: Comparing Fictions.”