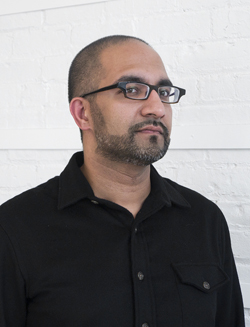 Prem Krishnamurthy’s talk “Double Agency” addressed the speaker’s two primary roles: a founder of the design firm Project Projects (with Adam Michaels) and the director and curator of P!—an interdisciplinary curatorial space that he described as a “mom-and-pop kunsthalle”—on the Lower East Side of Manhattan. Project Projects has a critical and conceptual relationship to graphic design, Krishnamurthy said, that includes curatorial and editorial roles. Challenging the traditional worker/client relationship, he aims to produce design that is porous rather than unidirectional, working with existing materials and ideas instead of starting each project with a blank slate. He also applies these ideas to exhibitions and public spaces to encourage agency and participation.

Krishnamurthy spoke in what he called a school context, which would leave historical and business matters aside and simplify his professional roles. He gave an overview of “Elective Affinities,” a design class that he taught at the Rhode Island School of Design in 2008. Mindful that teaching has a sole voice and that life diverges from the classroom model after graduation, Krishnamurthy experimented with different modes of collaboration with his students. For example, they used an Exquisite Corpse model in which one person worked on an assignment before handing it off to others to develop and complete. He also configured students into groups of two and groups of three during the semester before involving the whole class. For “Collective Collection,” a 2009 workshop at University of the Arts in Bremen, Germany, he led a group of participants that activated unused space in the building. There he stepped back from his teaching role to become a producer and facilitator. 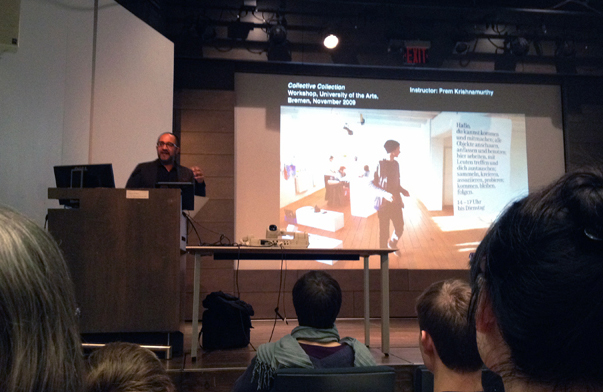 Prem Krishnamurthy collaborates with his audience (photograph by Christopher Howard)

The magazine Print allowed Project Projects to edit and design its January 2011 issue, and the firm settled on the theme of collaboration. Krishnamurthy and others took over the entire issue, assigning articles, hiring photographers, and designing the layout. In addition to producing an issue of a magazine, a form typically considered ephemeral, Krishnamurthy wanted to establish a community. To that end, Project Projects held a roundtable discussion about collaboration at Artists Space in October 2010, before which none of the thirteen participants—artists, designers, writers, fashion entrepreneurs, and more—had actually met. The idea, he said, was for the group to “drink a bottle of wine” and ruminate on what collaboration means.

An edited transcript of the Artists Space conversation runs through numerous pages in the issue, which also featured an unreleased typeface from a designer and several articles—on the Fluxus artist Alison Knowles, the art collective Group Material, and the filmmaker Jonas Mekas—that would be normal content for an art journal but unexpected fare for a venerated design publication. An article from the Raqs Media Collective took the longest and was the most fraught, Krishnamurthy said, but when he finally received the text, it was amazing.

Krishnamurthy switched gears to discuss P!, a curatorial space that intentionally lacks a fixed identity and allows for many voices. The first exhibition, Process 01: Joy (2012), featured letterpress work by the legendary designer Karel Martens, who created P!’s first logo; a mural by Chauncey Hare, a self-taught photographer who left the art world in the 1980s to become a socially engaged occupational therapist; and a New York outpost of the artist Christine Hill’s Berlin-based Volksboutique. She chose to paint the floor in her signature red color, which remains to this day. The exhibition’s press release was distributed in English and Chinese, a decision made to engage two linguistic communities that straddle the Lower East Side and Chinatown. 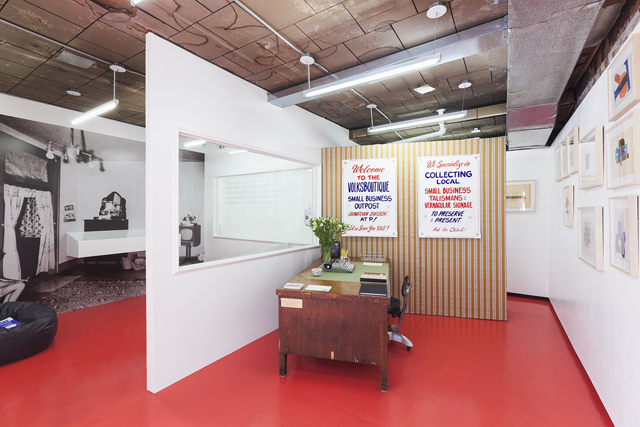 Another P! project was The Ceiling Should Be Green (2013), organized by Krishnamurthy and Ali Wong (also known as Kit Yi Wong) with a feng shui master known as Mr. Ye, who was charged with “circulating the energy” through a pleasing arrangement of artworks and objects. Permutation 03.x (2013) was a six-month-long exhibition and event series on copying and appropriation that served as a meeting place, a reading room, and an art gallery.

During the Q&A, Krishnamurthy emphasized not only a transparency in his methodology but also a resistance to conventions, such as avoiding the minimal signage and other visual codes of a contemporary art gallery. He compared the geographic location of P! to the overlapping metropolis in China Miéville’s novel The City and the City (2009), in which two cities occupy the same physical space in several places but remain strictly but irrationally distinct. In New York, Krishnamurthy said, pedestrians often pay attention to an art gallery’s storefront but “unsee” (to use a term from Miéville’s book) the Chinese characters in the window of the building next door.

In all of his work, Krishnamurthy seemed concerned with the conditions of interdisciplinary working, whether that’s organizing exhibitions as research for himself, creating innovative design for art biennials, or promoting the prescient visions of figures such as Brian O’Doherty, whom he claimed was not taken seriously as an artist forty years ago because he was both a critic and an artist (using the name Patrick Ireland). O’Doherty enabled those who came after him to earn respect in different roles, something Krishnamurthy accomplishes in spades.