May 18, 2014 By Christopher Howard
ConferencesPanels

Christopher Howard, founder and chief critic for In Terms Of, delivered the following untitled talk on a panel at the 2014 Open Engagement conference. The discussion, which was moderated by Chelsea Haines and included presentations by Sandra de la Loza and Juliana Driever, looked at new directions in writing about social practice from diverse perspectives. 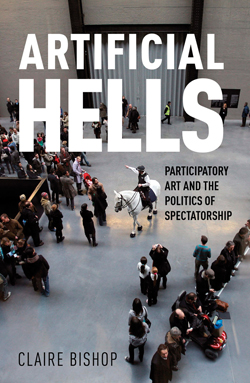 After being asked to participate on this panel, I wanted to know what kind of writing on socially engaged art is already out there. My conclusion is that there’s a lot of writing on socially engaged art out there. We have books devoted to the subject by Grant Kester, Claire Bishop, Pablo Helguera, Tom Finkelpearl, Nato Thompson, and Gregory Sholette, among others. We have essays by the above authors, as well as by Ben Davis, Steve Lambert, and Yates McKee. (Why so many men, I wonder?) They write on Project Row Houses, Theaster Gates, Suzanne Lacy, Tania Bruguera, Superflex, and the Yes Men, as well as projects sponsored by Creative Time, Art in Odd Places, and local and state arts councils across the country.

Artists, writers, and curators discuss socially engaged art in Creative Time Reports and on several blogs hosted by the nonprofit organization A Blade of Grass. Over the past two months, the blog for Open Engagement has published daily responses to questions about social practice, and I’m sure we will read more about what happens at this three-day conference in the coming weeks, adding to the growing body of literature on socially engaged art.

One could argue that participatory art probably generates more passionate debate than other form of art—although flipping through any art magazine or browsing any art blog would indicate otherwise. Traditional genres such as painting, sculpture, photography, and video still grab the lion’s share of attention, and reviews of socially engaged art rarely appear in the reviews section proper.

Still, socially engaged art is totally mainstream. Last fall, for example, Artforum magazine, generally accepted as the pinnacle of art writing, published several major essays, including “Limits of Control,” Felicity Scott’s text on Rain Room at the Museum of Modern Art (2012) and other immersive environments, followed by several pieces on Thomas Hirschhorn’s Gramsci Monument (2013) and a reassessment of Andrea Fraser’s untitled sex video from 2003, which isn’t quite social practice as we generally understand it but which embodies many of the same issues confronting the field.1 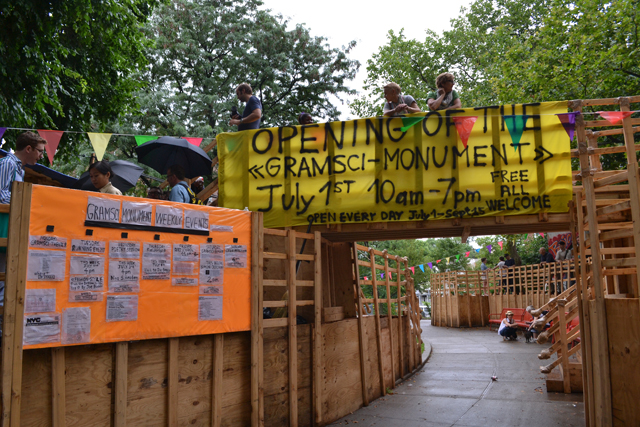 A view of Thomas Hirschhorn’s Gramsci Monument (2013) at Forest Houses in Bronx, New York (photograph by the New York Observer)

Last month ARTnews published major exposés on social practice, Carolina A. Miranda’s “How the Art of Social Practice Is Changing the World, One Row House at a Time,” and this month’s Art in America has a pair of essays on the genre: on the artist Pedro Reyes and three architectural firms that involve communities in their process. The academic journal October has published several of Bishop’s key essays and devoted its Fall 2012 issue to Occupy Wall Street. In the popular press, articles have been published in the Guardian, the New York Times, the Huffington Post, and many other news websites that aren’t art-oriented.

Considering all this activity, important questions arise: Are we content with the writing? Are we satisfied with the level of discourse? It depends on whom you ask. Many articles fret about documentation, about aesthetics, about experience, fussing over whether or not social practice is capital A art. Personally, I find such conversations to be uninteresting and unhelpful. My definition of art is elastic, expansive, and inclusive. Maybe I’m easy to please. But I fully recognize the need to keep having these conversations.

In his 2013 essay, “The Device Laid Bare: On Some Limitations in Current Art Criticism,” published in e-flux Journal, Grant Kester addressed the anxiety over writing on participatory art:

The result has been a series of largely unproductive debates over the epistemological status of this work, most of which entails variations of the same simplistic opposition between a naïve social art practice, associated with the evils of humanism or pastoral sentimentality, and a theoretically rigorous, politically sophisticated avant-garde artistic practice.

Often the conversation revolves around the ethical and political position of the artist, and how much the artist seizes or relinquishes power. I’ve found too much finger pointing and hair splitting in this strain of writing, which can be intensely puritanical.

So how do writers sort out the good from the bad, or the worthwhile from the inconsequential? Where does a critic—or a viewer or a participant—draw the line and evaluate a project? “Does it work?” offers one person. “Is it useful?” states another. These are two possible directions, but there are many more. A writer can discuss socially engaged art—or any form of art—through many lenses: the history of art, contemporaneous art practices, literature, music, politics, the social sciences, economics, religion—through anything, really, and that’s what great about art, and what’s fun writing about art. The only prescriptions I would suggest for a writer is: research your subject thoroughly, try to say something new, and always question received wisdom.

In the same e-flux Journal article, Kester encouraged writers to take a long view of social practice. He described a “field-based approach, in which the critic inhabits the site of practice for an extended period of time, paying special attention to the discursive, haptic, and social conditions of space, and the temporal rhythms of the processes that unfold there…. When does the work begin and when does it end?”

This is a good approach that is typical of historians and certain kinds of journalists writing long-form articles, but not really the methods of critics, reporters, and bloggers, whose publications require fresh content daily. When writing about a work of socially engaged art, it’s important to talk to the artist, the participants, the passers-by, the institutional organizers, the funders—whoever might have been involved in or witnessed a project. Consult the published record. Consult as many sources as you can. Don’t just rely on your reactions. 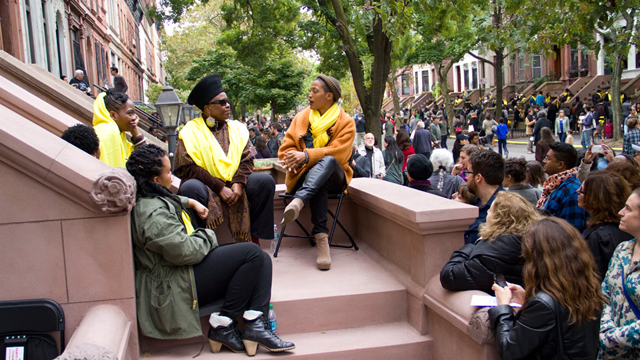 Participants in Suzanne Lacy’s Between the Door and the Street (2013) in Brooklyn, New York (photograph by Nicola Goode)

The history of art is far from static—it changes when new discoveries and connections are made. Moreover, a single review is a discrete piece of writing, never the final word, and one response at a given point in time. Would you get a sense of the 2014 Whitney Biennial if you just read one New York Times review and nothing else? Of course not. But read five, ten, twenty pieces—published over many months—and you’d get a good really sense of the reaction to the exhibition. The same goes for Suzanne Lacy’s Between the Door and the Stoop (2013) and Hirschhorn’s Gramsci Monument, which generated many written responses in print and online. It would be fantastic if writers would return to Forest Houses in the South Bronx, where the monument was sited, and talk to people who had been there last summer. Or talk to the attendees who live elsewhere, or to Dia Art Foundation employees. I’m hopeful this will be done, and we’ll eventually get a better understanding of long-term implications of the work.

I’ve been a practicing art critic in New York for ten years, reviewing exhibitions for print and online publications and also writing the occasional essay, but I haven’t written much on socially engaged art. Perhaps a parallel project is something that I’ve been engaged with for a few years.

A self-published blog called In Terms Of publishes criticism of live speaking engagements such as lectures, panels, conversations, symposia, and the like, concentrating on events in New York City (but not exclusively). Public programs have existed for decades, yet the rapid increase of such events over the past ten years, as well as their standing in the art world, is astounding. An art exhibition today is inconceivable without an attendant calendar of events. Furthermore, live speaking engagements constitute a core part of the mission of libraries, bookstores, universities, and cultural centers. Since much contemporary art—not just social practice—depends on dialogue and conversation, the need for informed commentary on lectures and panels is tremendous but underdeveloped. 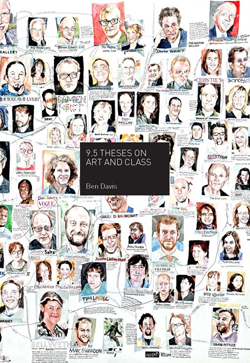 In Terms Of has examined talks with a wide range of players: artists, art historians, curators, critics, and students, as well as scholars in the related disciplines of literature, philosophy, architecture, and design. One recent post examined the intersection of aesthetics and politics generated from a panel of artists and activists that was moderated by the author of a book called 9.5 Theses on Art and Class. Another five-part series covered a one-day conference on curatorial authorship in art exhibitions, which featured historians, curators, and artists from around the United States. A third post explored the notion of critique in contemporary art through an analysis of a lecture by the installation artist Mika Tajima. Events outside the art world are also important: I’ve written about the contributors to an anthology of feminist comics, the author of a book that historicizes the Riot Grrrl movement, a former New York Times columnist on ethics, and the political philosopher Chantal Mouffe, as well as the occasional forays into economics, politics, and law.

I consider texts in In Terms Of to be experimental, not in the avant-garde sense but rather because I’m drawing from multiple genres: basic reporting, investigative journalism, art criticism, newspaper editorials, polemical prose, book reviews, art-historical research, and so on. Most of the time I follow the chronological presentation of the speaker or panelists, but not always, and that’s one thing with which I constantly struggle. After attending an event and taking scrupulous notes, I conduct research and interject my own responses into the written narrative. If the event was recorded and the video posted online, I’ll watch parts or all of it.

I don’t approach live speaking engagements as art and would have a good laugh if you tried to convince me that a panel is a “performance of language.” I have no problem, though, stating that the overall goal for In Terms Of is to publish “socially engaged writing.”

What kind of writing do social-practice artists want, if they want it at all? Do they need a fatter CV and bigger portfolio to establish professional credentials for job applications? Do they need publicity that will help them get a grant to fund the next project? How about clips to show mom and dad to justify the frivolous and expensive master’s degree? It still feels good to see your name in print, right? In a larger sense, are social-practice artists looking for a silver-bullet treatise, a text that defines and validates their work, something like Michael Fried’s “Art and Objecthood” or Rosalind Krauss’s “Sculpture in the Expanded Field”? You tell me.

I would assume that any artist would want feedback on his or her work, something that acknowledges their effort and legitimizes their work. Not as approval—after all, an artist doesn’t work for his or her critics. But the work cannot exist by itself. It must be supported by an audience and by participants, through spoken and written words, through memories and feelings, with some level of intellectual satisfaction and aesthetic fulfillment. Will there be good writing about socially engaged art? Most emphatically yes. Will there be bad writing? Without a doubt. Will some writers miss the point? Sure, but others will get certainly get it.

1 See the table of contents of the November 2013 issue of Artforum for links to the articles on Hirschhorn and Fraser.