This essay was largely written during a November 2015 residency at the Luminary in Saint Louis, Missouri. 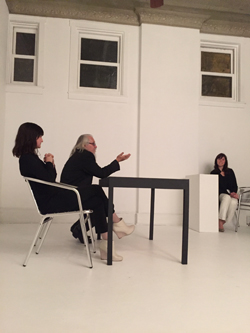 Olivier Mosset was in town for the opening of his exhibition at Parapet/Real Humans, a project space run by Amy Granat in a storefront in the Fox Park neighborhood of Saint Louis. On view was a framed set of four lithographs of two thick black stripes on a square of white paper. The set, it turns out, was made for a Swiss Institute benefit in 2004. Granat said the work reminded her of September 11—I suppose any two vertical lines will do that. The artist compared them to an optometrist’s vision test. As someone who can’t see six inches past his nose without glasses or contacts (and who never skips his annual eye-doctor visit), that made more sense.

With long gray hair and a long gray beard, Mosset easily looked the part of a sixties Euroactivist and biker outlaw—he has lived in Tucson, Arizona, since the mid-1990s. His interviewer was Marie Heilich, assistant director of White Flag Projects in Saint Louis, a slender brunette with bangs, dressed in all black and armed with an MA in curatorial studies from Bard College. Mosset’s talk—a rare speaking engagement for him, we were told—was largely a monologue. Heilich made intermittent comments and Granat, who was operating a smartphone that projected slides of the artist’s work on the wall beside the speakers, jumped in every so often.

Heilich encouraged Mosset to revisit his early years, so he gave a brief history of BMPT, a group of four European artists (Mosset with Daniel Buren, Michel Parmentier, and Niele Toroni) that came together in 1966. “The idea was to question what gives value to painting,” Mosset said, targeting uniqueness, personal expression, and color as culprits. His conception of art, however, began changing a few years earlier, when Mosset had been floored by Jasper Johns and Robert Rauschenberg, whose work he saw at Kunsthalle Bern in 1962. “This was in,” he recalled his excitement, “This was happening.” Rauschenberg’s Monogram (1955–59), the sculpture of a shaggy taxidermied goat stuck in a car tire, “was quite a shock—is this art?” But Mosset still had classical modernism on the brain, as he twice emphasized the painted nature of Piet Mondrian’s work, declaring that reproductions of it are nothing like the real things. Though he wasn’t familiar with Russian Constructivism and Swiss Concrete art at the time, he acknowledged an affinity with them. I got the sense that Mosset is unburdened by tradition, not antagonistic toward it. Give painting autonomy, he even said at one point. 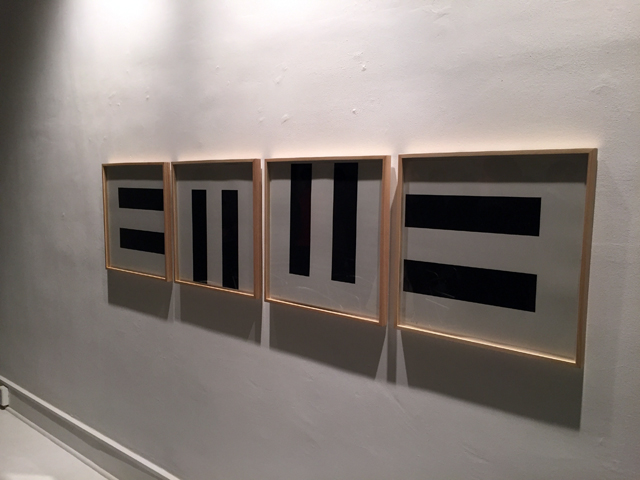 For Mosset, Rauschenberg taking home the Golden Lion, the top prize at the 1964 Venice Biennale, marked the end of the importance of Paris, where he had moved two years before, at age eighteen. Previously the French avant-garde consisted of the Nouveau Réalisme movement: Yves Klein, Jean Tinguely, Piero Manzoni, and others. BMPT reacted against that group’s preferred materials: found objects and rubbish. Earning notoriety after its first event, BMPT was invited to participate in the Salon de la Jeune Peinture, where the artists painted their works—Buren’s stripe, Mosset’s circle, Parmentier’s fold, and Toroni’s brush mark—during the opening, not in advance. (They subsequently withdrew from the exhibition the next day.) At that and other events they projected slides, played audiotapes announcing “art is the enemy of freedom” and “art is the enemy of presence,” among other statements, and handed out their propaganda pamphlets. “Ideas are the art, not the paintings,” Mosset declared. Audiences soon came to recognize each member’s signature style, so the four agreed to do each other’s work.1 Mosset began painting stripes and later introduced color: gray stripes on white, then green on white, then white on color, and so on. After that he made monochromes (more specifically, they are single-hued paintings).

Mosset continued his monologue, which by this point felt like someone reading a Wikipedia article—it was all factual recollection in a dry tone. Even in Paris, he said, people were talking about New York, so he traveled there in 1967, where he met Andy Warhol. After moving to the city ten years later, he sought out the painter Marcia Hafif after she wrote an essay on contemporary painting called “Beginning Again,” published in Artforum in 1978. With her and Joseph Marioni, he formed the New York Radical Painting group, which had exhibitions at Sidney Janis Gallery in New York in 1983 (New Abstraction) and at Williams College in Massachusetts in 1984 (Radical Painting). Mosset also got hip to a newer scene of artists, including Peter Halley, Philip Taaffe, and Jeff Koons. In the 1990s, Mosset worked with John Armleder, Sylvie Fleury, Steven Parrino, and Cady Noland, but the artist barely mentioned these collaborations during tonight’s talk. 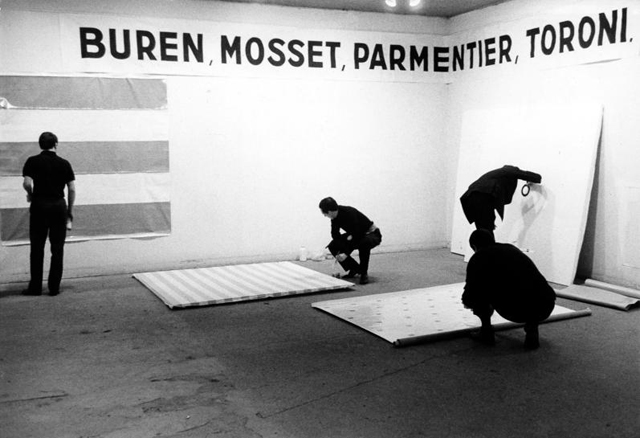 Mosset affably stated that he has no strategy, does what he wants, and cannot control trends. “I’m basically interested in abstract painting,” he said, and somehow people are attracted to what he does. Heilich questioned him about his social and flexible practice, in which he diminishes his own authorship (evident, for example, in his work with BMPT), but Mosset construed the question differently. “The art practice is very selfish,” he responded, and exhibitions involve a community. “It’s personal when you do it; it’s social when you show it.” Mosset believes the gallery gives you the distance to see your work differently.

During the Q&A, an audience member inquired about the meditative nature of his circle paintings that, she conjectured, might signify emptiness or completeness. Mosset deflected this impression and said he was thinking of the shapes found in works by Johns and Kenneth Noland, which have formalist, not symbolic, meanings. (He also recognized that he did invent the circle.) The questioner asked him if the circles got better and better as he made more of them. Yes, he replied with a smile, but they were still the same.

Heilich asked, “Do you see any contemporary approaches that stand out to you, for better or worse?” He didn’t identify any artists or styles but instead considered the differences between then and now. “At the time in Paris, we could react against what was happening, whereas today, I don’t know exactly what you can react against. It’s a different era.” And who else to blame but the internet. A younger audience member argued that “artists will always respond to each other, and to each other’s work, but that kind of clear dialogue [from the sixties], I don’t think it’s actually possible now.” Today everyone has a voice and a platform, she continued, but with equity that voice is minimized. Mosset agreed—there are now more artists and more information. I feel sorry for them, overwhelmed by online communications, and am sure artists from forty to fifty years ago probably had the same anxieties about their own ballooning art world. The audience member was relieved that artists are becoming activists again. Culture is important, Mosset chimed in, especially after the recent terrorist attack in Paris. 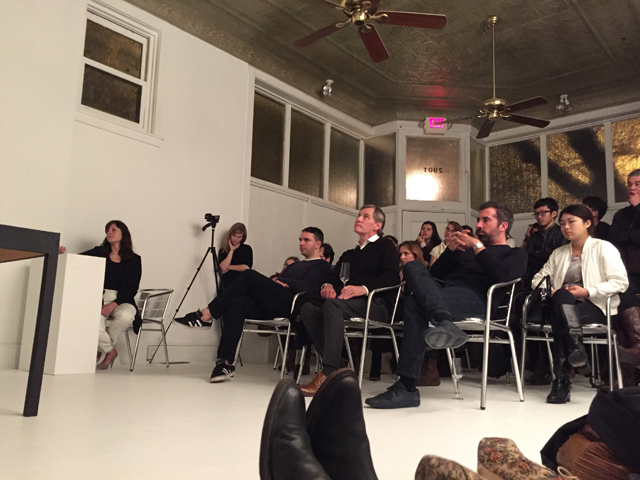 The audience at Parapet/Real Humans (photograph by Christopher Howard)

Earlier Heilich had observed that Mosset’s practice—producing circles, stripes, and singular colors—united painting and the readymade in the same object. This idea made sense at the moment but unraveled the more I thought about it. His practice is actually artisanal and small batch, not mass production, and analogous to someone like Gilbert Stuart, whose cranked out 130 versions of the Athenaeum Portrait of George Washington in the late eighteenth and early nineteenth centuries. “A second painting might be a repetition,” Mosset said in a recent interview, “but it can never be a replica.”2 You can’t help but admire the audacity of painting the same type of picture for years, if not decades, while at the same time pity the paucity of ideas.

Trying to vary the topics, Granat asked about Mosset’s interest in motorcycles, which he collects, rides, and occasionally exhibits with his paintings. While such lines of inquiry did not lead to interesting discussion, the effort was appreciated. And while I enjoyed hearing from an artist whom I have not previously studied, I was disappointed with the light moderation—Mosset did not get into much detail about the meaning of his work and with art itself. It seemed as if Heilich was too timid (or just too polite) to cross-examine this art-historical figure about any radical ideas he has or might have had, or to find out what makes him produce what appears to be redundant or complacent work.

1 Olivier Mosset made circle paintings from 1966 to 1974. Daniel Buren obviously never stopped with the stripes.