I Don’t Want No Retro Spective

This essay is the third of five that reviews a recent symposium at the Graduate Center, City University of New York. Read the first, second, fourth, and fifth texts. 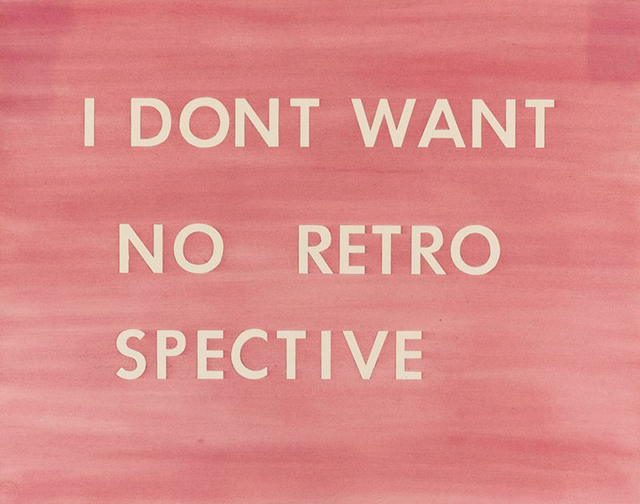 For artists, the solo exhibition reigns supreme. For curators, it’s the group show. From major events such as the Venice Biennale, Documenta, and Whitney Biennial to curator-driven institutions like the Wattis Institute in San Francisco, Witte de With in Rotterdam, and MoMA PS1 in New York, the authorial curator’s name has typically transcended the artworks on view (or so the story goes). While the art-publishing industry ceaselessly cranks out new books on curatorial issues—nearly always an edited, multiauthored tome—few critical studies have considered the theory and practice of showing the work of a single artist, which is perhaps the bread and butter of art museums worldwide. For the second session of “Exhibit A: Authorship on Display,” titled “The Retrospective,” one panelist presented a brief investigation into the history of the solo exhibition while two more offered case studies on atypical exhibitions of a contemporary artist.

Exhibitions are generally categorized as solo, group, and collection, explained João Ribas, deputy director and senior curator of the Serralves Foundation in Portugal, and scholars have typically historicized the group show. He cited key studies such as Ian Dunlop’s classic The Shock of the New: Seven Historic Exhibitions of Modern Art (1972) and Bruce Altshuler’s massive two-book set, Salon to Biennial—Exhibitions That Made Art History, Volume 1: 1863–1959 (2008) and Biennials and Beyond—Exhibitions That Made Art History, Volume 2: 1962–2002 (2013), as providing concise histories of the form.1 For curators, Ribas said, group exhibitions contribute to economies of reputation and curatorial prestige. Nevertheless, the “one-man show,” he acknowledged, has formats, methodologies, and conventions of its own: chronology, biography, connoisseurship, evaluation, and mediation (e.g., the purity of the artist’s voice, curatorial self-effacement). Ribas didn’t discuss collection shows, though I imagine that museum handbooks and guidebooks follow a conventional scholarly logic of highlighting the greatest hits of an institution. 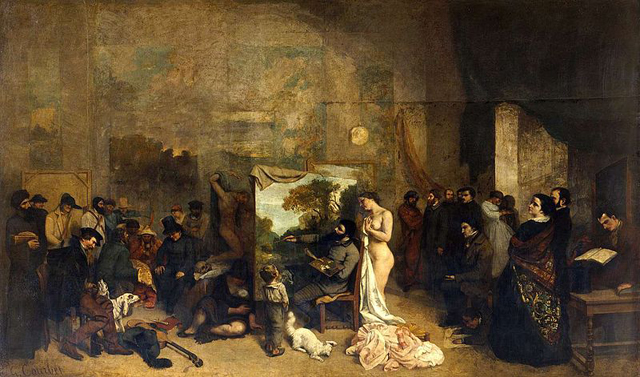 Gustave Courbet, The Painter’s Studio: A Real Allegory of a Seven Year Phase in My Artistic and Moral Life, 1855, oil on canvas, 142 × 235 in (artwork in the public domain)

Ribas’s preliminary research into the history of solo exhibitions started with Nathaniel Hone, an Irish artist who independently presented a satirical painting called The Pictorial Conjuror after the work’s rejection from the Royal Academy’s annual exposition in London in 1775. Ribas pinpointed the names of other eighteenth- and nineteenth-century European artists who had important solo and single-painting shows in public and private locations: John Singleton Copley, Thomas Gainsborough, Eugène Delacroix, Édouard Manet, Berthe Morisot, and Paul Cézanne, among others. William Blake’s solo showing in 1809 had a visual and theoretical system, Ribas said, and Joshua Reynolds’s 1813 exhibition in London was organized for general symmetry and an overall pleasing effect. Further, Ribas noted that James Abbott McNeill Whistler designed interiors for his paintings and Paul Signac had formulated ideas about the ideal display of his work.

Various nineteenth-century accounts described one-person exhibitions as commercial and career advancing, which was certainly true of Gustave Courbet, whom Ribas said purposefully identified a solo presentation of his work—housed in a temporary structure near the official Exposition Universelle of 1855, which featured more of his paintings—as an “exhibition,” not an “exposition,” to enhance the term’s arrogant commercial connotation. (The Painter’s Studio, pictured above, was among the highlights of Courbet’s independently produced exhibition, which he called The Pavilion of Realism.) Ribas reported that other sales tactics involved concepts of a good picture and the importance of an artist’s late work. He also mentioned how a retrospective of Robert Rauschenberg’s work in Beijing in 1985 was highly influential to Chinese artists. 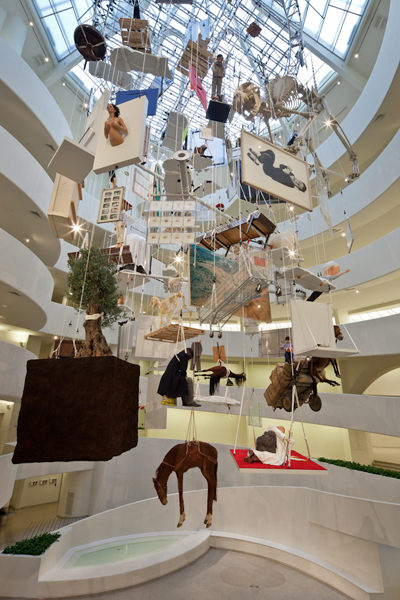 Installation view of Maurizio Cattelan: All at the Solomon R. Guggenheim Museum in New York (photograph by David Heald)

Lewis Kachur, an art historian at Kean University and the author of the excellent book Displaying the Marvelous (2001), discussed Maurizio Cattelan’s “un-retrospective” at the Solomon R. Guggenheim Museum in New York in 2011–12, which Kachur characterized as a witty engagement with the career survey. The Italian artist was horrified, Kachur said, when the Guggenheim offered him a show. Cattelan proposed an all-or-nothing gambit: the museum had to display every work he has ever made. Despite his usurping of the curatorial role—the selection of objects would already be determined—the museum’s senior curator Nancy Spector agreed to the novel format. The show, titled Maurizio Cattelan: All, had no chronology, theme, or choice: “It’s everything, it’s all,” Kachur said.

As Cattelan “sweeps his work into the immediate present,” the overall effect of his oeuvre, which hung from the skylight down the center of Frank Lloyd Wright’s building, circumvented the individual contemplation of objects. Kachur enumerated various precedents of artists engaging the museum’s central atrium and surrounding architecture. Alexander Calder was the first to suspend work in the museum’s open space, in 1964, followed by various types of presentations by Jenny Holzer (1989), Dan Flavin (1992), Claes Oldenberg and Coosje van Bruggen (1995), Nam June Paik (2000), Matthew Barney (2003), and Cai Guo-Qiang (2006). Cattelan claimed to have seen every show at the Guggenheim since 1993, when he moved to New York, and would have been aware of these installations. Kachur’s research into the subject, he admitted during the session’s Q&A, was limited to the published material on the exhibition—he hasn’t conducted visits to archives or interviews yet. Even so, the scholar’s trajectory looks promising. 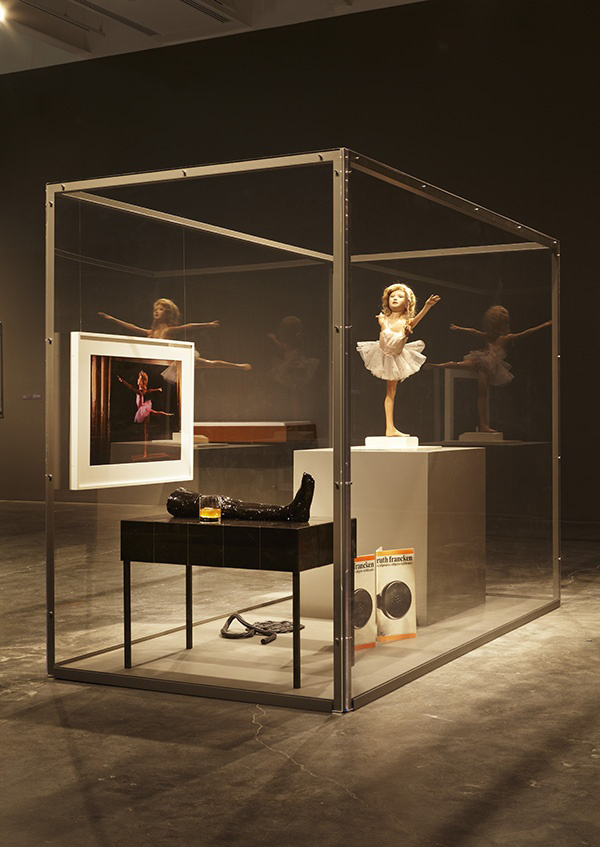 Installation view of Rosemarie Trockel: A Cosmos at the New Museum of Contemporary Art in New York (photograph by Benoit Pailley)

Lynne Cooke, chief curator and deputy director of the Museo Nacional Centro de Arte Reina Sofía in Madrid, described her experiences planning a retrospective for Rosemarie Trockel. Allergic to the white box, this German artist prefers to show in institutions that challenge her. And because she values her studio time and wanted to spend less on exhibition administration, Rosemarie Trockel: A Cosmos was conceived as a traveling show for multiple venues. Each iteration of the exhibition, though, did feature new and different elements. Cooke and Trockel elected to include art by her peers and objects important to the artist, as well as works by so-called outsider artists like James Castle, Manuel Montalvo, and Judith Scott. The Madrid show included eighteenth-century botanical drawings—and also their late-nineteenth-century transformations into exquisitely crafted glass objects—that all Spaniards know, Cooke said, just like they know the paintings of Diego Velázquez and El Greco.

The two also took field trips together and considered past work, unfinished projects, and new projects. They didn’t write a list or set of goals—at least not at first. The show, Cooke said, developed organically, in an associative way. Despite such close collaboration, Cooke relayed that Trockel did not want to be identified as a cocurator for the show, but the Reina Sofía’s website credits both women as organizers. When A Cosmos landed at the New Museum in New York in 2012, my strongest reaction was that the show looked heavily curated, which may relate to Cooke’s discussion of the art historian Svetlana Alpers’s concept of the “museum effect” and of the differences between visual distinction and cultural significance. 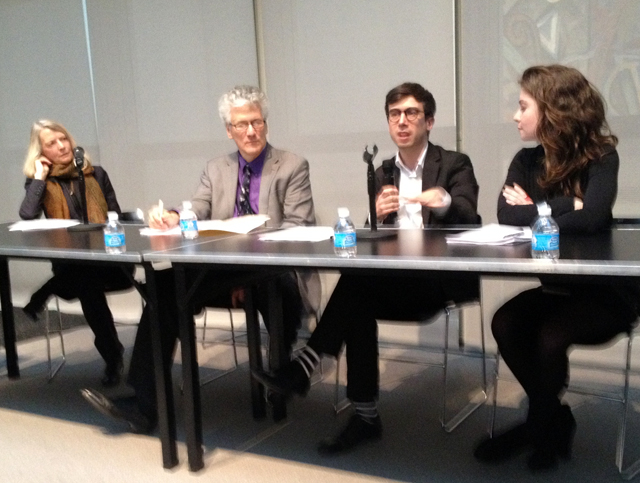 The audience Q&A, adeptly moderated by Chelsea Haines, a PhD candidate in art history at the Graduate Center, touched on concerns ranging from practical to absurd. Someone asked about a hypothetical exhibition that has neither artist nor curator, which Kachur called a “riderless horse.” Someone else brought up the idea of a curator’s “portfolio artist.” Sometimes our reception of individual artists, Ribas said, is shaped by their exhibitions, giving credit to Cooke’s past work with  Hannah Darboven and to the 1960s dealer Richard Bellamy’s framing of his artists.

1 I would add Bruce Altshuler’s The Avant-Garde in Exhibition: New Art in the 20th Century (1994) and Jens Hoffmann’s Show Time: The 50 Most Influential Exhibitions of Contemporary Art (2014) to this list, though I’m sure there are many others.