The Left Is Still Right 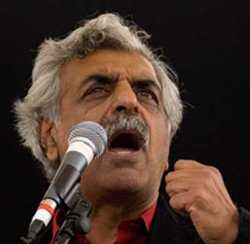 We at Global Warming Your Cold Heart attended—as a crew, a team, a gang, a mass, a tumor—a talk and discussion with Tariq Ali, the editor of New Left Review, at 16 Beaver Group, a reading and discussion group located at 16 Beaver Street in lower Manhattan. The occasion for this talk was the publication of Ali’s book Pirates of the Caribbean: Axis of Hope (London: Verso, 2006).

Ali stated at the beginning of his talk that he wrote this book to call our attention to some positive events taking place in Latin America, events that the current crises in the Middle East—and the Islamist resistance to Western Imperialism, the Washington Consensus, or, simply, Empire—have distracted us from. The problem with the Islamic Radicals, despite their resistance to Empire, is that they, as Ali more or less put it, offer no acceptable or genuine alternative to Empire. The positive events in Latin America, minor miracles it seems in Ali’s view, are Hugo Chavez’s continuing electoral triumphs in Venezuela, Evo Morales’s election in Bolivia, and Fidel Castro’s ongoing revolutionary triumph in Cuba. These are his “pirates of the Caribbean.” And they represent an “Axis of Hope.” They also grace the cover of Ali’s book.

I was interested in attending the talk because of an interview with Fred Halliday that appeared in the journal Salmagundi. Halliday is a former contributor to the New Left Review who split some years back with the journal and his comrades there. I was interested in seeing if Ali might confront some of the accusations Halliday made in this particular interview about Ali, personally, and about the Left, in general. Halliday’s accusation about Ali is that his position on global affairs is, if we view it objectively, a conservative one. Halliday’s accusation about the Left is that it is like Rip Van Winkle. It has fallen asleep and woken up fifty years later, blissfully ignorant of everything that’s happened during its slumber. 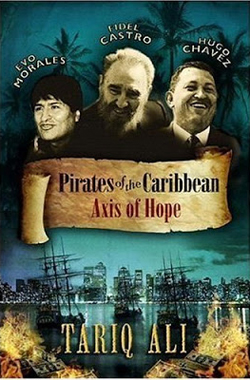 The rift between Halliday and Ali revolves primarily around the issue of imperialism. For Ali imperialism is always bad, and his overriding commitment is to the resistance of US imperialism. Halliday, on the other hand, seems to think that at times the Empire, despite itself, now and then does some good. Halliday, despite his rift with Ali and the New Left Review, still considers himself both a Leftist and an anticapitalist. He, it seems, believes that he is the one who has remained true to his core values. Ali, however, without it seems even knowing it, has drifted to the Right—or, in the very least, a conservative position.

I was disappointed that Ali addressed none of this directly. At the beginning of his talk he did state that he wrote Pirates of the Caribbean, in part, to address what he perceived to be a shift to the Right by many of his formerly radical peers. But beyond this, disappointingly, he never really got into it. It seemed to me that Ali’s central point was—and I presume his book is also about this as well—is that Chavez just might be the guy, the icon, the Left has been looking for. In fact, it seemed to me what Ali was suggesting, but he would not come right out and say it, at least not directly, was that Chavez might just be to the twenty-first century what Che Guevera was to the twentieth. I took all his talk about Castro to imply this. In other words, what the Left needs is a twenty-first-century man, a leader, an icon.

In the end, however, I thought Tariq Ali came across as an equivocating propagandist.

Ali mentioned that Chavez had been democratically elected to office five times. It seems that he wanted to make sure everyone in the room caught wind of this “fact.” And despite what I’ve read here, within the borders of Empire, I’m willing give Ali the benefit of the doubt. I’m also willing to entertain Ali’s “iconization,” as one audience member called it in a criticism of Ali, of Chavez.

Written by De Selby, “The Left Is Still Right” was originally published in Global Warming Your Cold Heart on October 17, 2006.