This essay is the third of three that reviews a recent symposium at the Jewish Museum. Read the first and second texts. 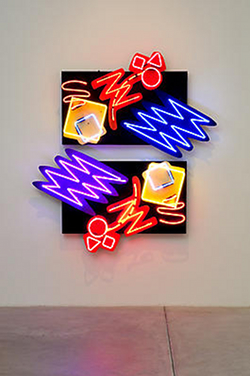 The second and final panel on the symposium for the Jewish Museum’s exhibition Jack Goldstein x 10,000 featured presentations by two artists—Kathryn Andrews and Paul Pfeiffer—who emerged a couple generations after Jack Goldstein (1945–2003). Neither artist was directly influenced by Goldstein, as they arrived at their aesthetic approach prior to gaining knowledge of the elder artist’s work. One of two moderators, Claire Bishop, professor of contemporary art at the Graduate Center, City University of New York, described the situation as “reverse engineering.” While hers was certainly a clever use of the phrase, the concept is standard operating procedure for scholars making connections between the art of different decades. That doesn’t mean artists don’t have a say, and here is what they said about Goldstein and influence.

Andrews, an artist based in Los Angeles who earned her MFA at Art Center College of Design, presented several examples of recent work. Though she did not frame her practice as being influenced by Goldstein, one can detect similar interests: Hollywood film, found objects, and the aura of authorship expressed through mixed media. Using the gestures of others as her own, Andrews made her wall sculpture The Eighties (2008) by renting a neon sign from a prop shop, having it reproduced, and hanging that piece upside down and underneath the rented one, which she returned to the prop shop after the exhibition it was shown had concluded. The shop’s secretary, Andrews revealed, had designed the original neon sign. For another work, she asked another person to make a piece for her; she ended up with a wooden sawhorse covered with butterfly stickers that spelled out her first name. To her, a temporary work like The Eighties or Ashton (2010), a stainless-steel coat rack and hanger accompanied by a ring worn by Ashton Kutcher in the movie The Killers, is a “performance.” 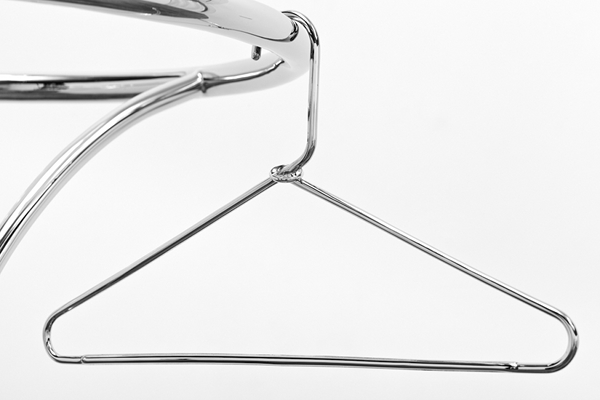 Andrews has a ninety-nine-year lease on a prop in her work. These rentals, she said, come with certificates of authenticity that “guarantee” the original use or owner of the object. This fact reminded me of an essay I read a few years ago, “Dust to Dust” by Matthew Bown, that compared the obscene prices of contemporary art sold at auction to the adoration of medieval Christian relics. There was probably enough wood from Jesus’s cross floating around Europe to build a hundred crucifixes. I also found it interesting that the Pictures Generation did not traffic in certificates, as the previous generation of Conceptual artists had done. 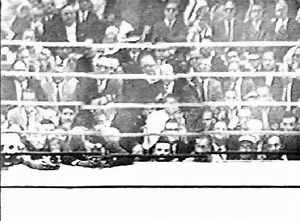 Pfeiffer said he had first heard about Jack Goldstein from a collector, in response to his award-winning contribution to the 2000 Whitney Biennial, a disturbing video loop of Tom Cruise gyrating face down on a couch, taken from Risky Business (the 1998 work is called The Pure Products Go Crazy). He learned more about Goldstein through the Scott Rothkopf article in the October 2001 issue of Artforum, whose cover image was the barking dog from Shane (1975), and also through a performance of Two Boxers (1979) that he saw in 2002. Discovering Goldstein’s work was “like finding long-lost relatives,” Pfeiffer said, but he strangely didn’t mention his own videos involving boxing, including The Long Count (I Shook Up the World) from 2000, shown at the Project in Harlem, in which he digitally erased the figures of Cassius Clay and Sonny Liston from the ring, leaving ghostly traces of their moving bodies. For Pfeiffer, Goldstein’s work defies and transgresses binaries such as inside/outside, self/other, performance/film, black/white, and public/private. This, he said, might be the central mission or content of the work.

During the open discussion with Bishop and Julia Robinson, assistant professor of art history in the Department of Art at New York University, Pfeiffer commented on the mythology of Douglas Crimp’s Pictures exhibition and essay. “Influences retell history,” he said. Andrews found it hard to track Goldstein’s influence in her work. An artist such as Robert Longo has more shows in spaces to which she has access. She also wondered about the contexts in which Goldstein might be placed, such as Light and Space, instead of the Pictures Generation, in which he is always understood. I liked that she questioned the received wisdom of art history. After all, Goldstein did spend most of his career in California, not in New York.

Robinson asserted that Goldstein’s work defines the Pictures Generation but transcends it. She also called Pictures “the last generation” of artists, meaning a coherent group that can be categorized largely without opposition. I’m not sure that’s a fair argument, as one can identify numerous artistic cliques from the last thirty years that could be generational, such as the one revolving around Kelley Walker, Wade Guyton, and Seth Price, or the scene at Deitch Projects as chronicled in the book Live through This (2005), or the Relational Aesthetics crowd, as grouped by Nicolas Bourriaud and canonized in the Guggenheim Museum’s exhibition theanyspacewhatever. The contemporary art world is indeed too plural, too diverse for any one scene to lead the pack—but there are movements, even if no one uses that term. Relatedly, the 2000s and early 2010s will probably be remembered as the decades of the mega gallery, with dealers like Larry Gagosian and David Zwirner having the most influence.

Bishop noticed that today’s artist is interested in the celebrity aura and the proper name. Robinson said that Goldstein had evacuated proper names, but Andrews countered, arguing that Longo had brought them back (with his use of stills from Fassbinder films). The roaring Metro-Goldwyn-Mayer lion, she said, is a proper name. “That’s not a star—that’s a brand,” Pfeiffer retorted. To him, Kutcher’s ring has the aura of a coat rack—it’s not special at all to him. But what is valuable to one person may not be important to another: does anyone remember the Carl Andre bricks scandal in the 1970s? The panelists agreed that the aura of celebrities, now on Twitter and appearing in reality television shows that are about themselves, has now become mundane. 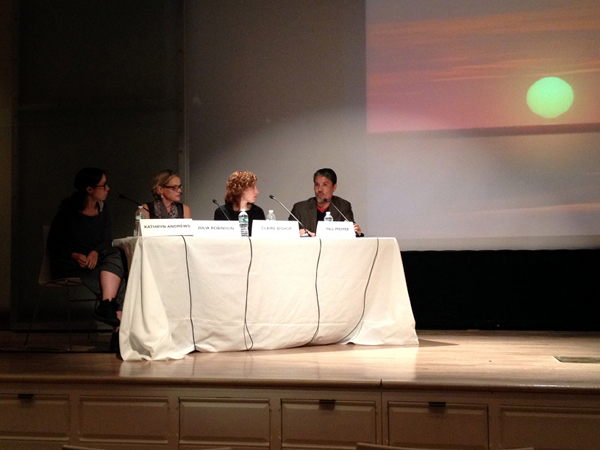 One panelist called Goldstein a cross between Peter Fonda and Keith Richards—maybe it was Pfeiffer. Andrews talked about the “symbolic presence of the artist’s body,” and Bishop mentioned the “curatorial paradigm” that was Goldstein’s class at CalArts in which students reconfigured stuff instead of making new art objects. Andrews related this to collecting art as a leisure activity, and Robinson compared the film director to the curator and asked “Does that mean the stakes of dematerialized object are evacuated?” Pfeiffer said that we move between material and immaterial now. To me this was an instance in which the form of one generation (Pictures) becomes the content of another, as Longo stated in the first panel.

During his Rhizome Seven on Seven collaboration in 2013, Pfeiffer worked with Alex Chung, the inventor of Giphy, a microblog website for animated GIFs. Eyes like this kind of vibration, he said. “The loop is vision.” He had the idea to create a company that could hypnotize people with animated GIFs. But that’s the TV news, he laughed. Bishop noted how audiences’ attention spans have shortened since the 1970s. Goldstein’s film Shane is three minutes long, but animated GIFs last three seconds.

A man in the audience wanted to clarify the difference between influence and copying. He recalled how his exposure to the singer and musician Jonathan Richman inspired him to play music, not to copy him but because he thought, “I can do that.” (Richman was a Velvet Underground groupie whose own band, the Modern Lovers, took the delivery of his idol Lou Reed into new directions, such as comedy.) The audience member was also impressed by Goldstein’s work in writing and graphic design from the 1990s—as was I—and never thought the artist would do something like that. He also considered the paintings from the 1980s to be sellout stuff, and that the films from the 1970s came out of nowhere. Matt Mullican, also speaking from the audience, said that Goldstein didn’t come out of nowhere but from a group of twenty people in New York’s downtown scene. The influence of those twenty people continues to reverberate today.